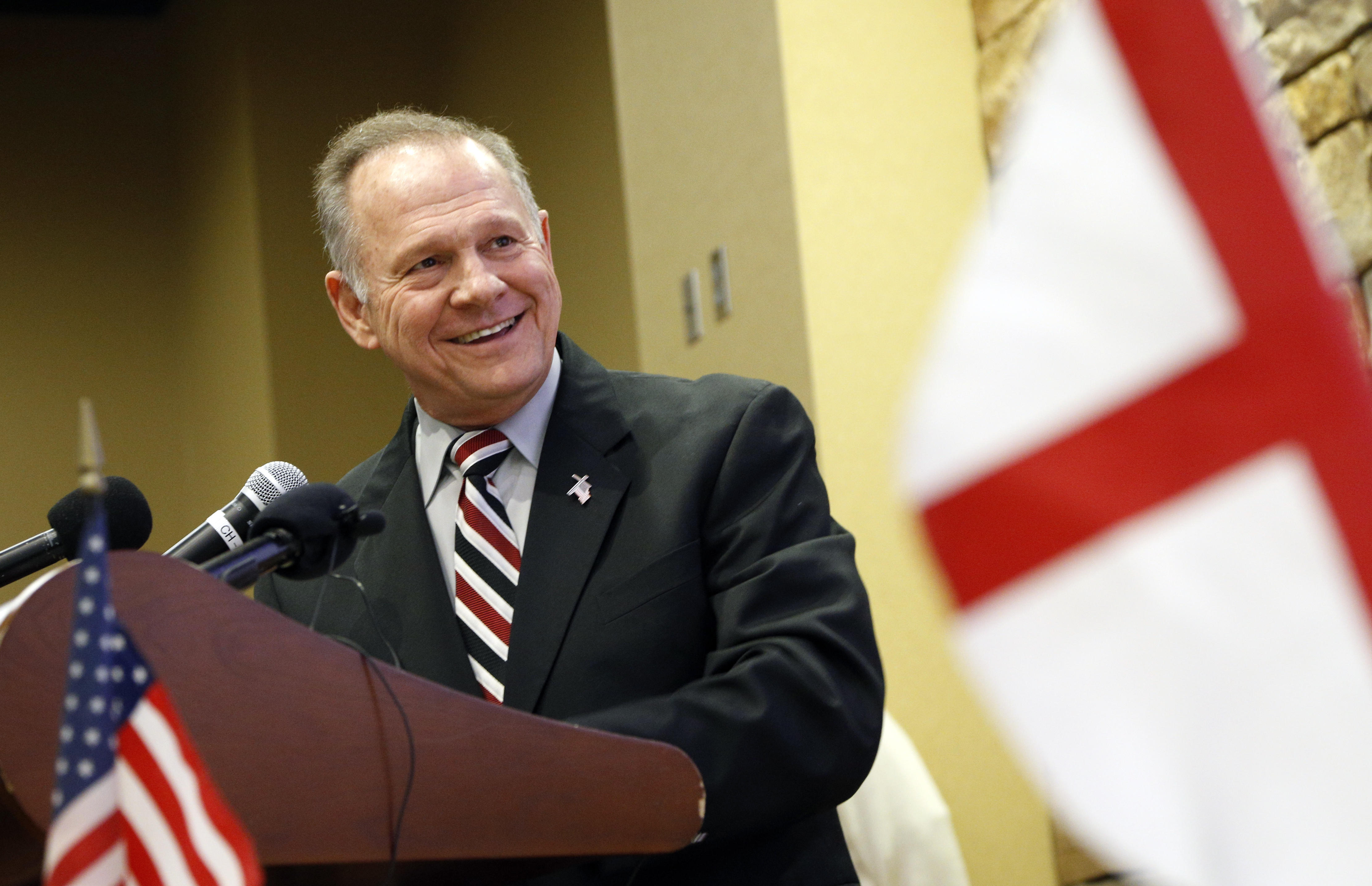 WASHINGTON -- Amid pressure from within the Republican Party to step aside, GOP Senate nominee Roy Moore on Sunday night called a newspaper report carrying allegations he had sexual contact with a 14-year-old girl four decades ago "fake news" and said a lawsuit would be filed in response.

Moore's condemnation of a Washington Post story during a campaign speech in Huntsville, Alabama, came hours after another fellow Republican, Sen. Pat Toomey of Pennsylvania, urged him to drop out of a special election for one of Alabama's Senate seats. Toomey said Moore's explanations had been inadequate and that Republicans should consider Sen. Luther Strange as a write-in candidate to run against Moore. Strange lost the Republican primary to Moore.

Moore tried to raise money from the controversy, writing in a fundraising pitch sent about midafternoon that the "vicious and sleazy attacks against me are growing more vicious by the minute." He told supporters, "I'm counting on you to stand with me at this critical moment by chipping in a donation to help me bust through the vicious lies and attacks and get the truth out to as many voters as possible before December 12."

The Post story quoted four women by name, including the woman who alleged the sexual contact at 14, and had two dozen other sources. A former prosecutor who once worked alongside Moore said Saturday that it was "common knowledge that Roy dated high school girls."

In a Huntsville gym, Moore assured supporters that the Post story was "a desperate attempt to stop my political campaign" and that the allegations that he was "involved with a minor child are completely unfalse and untrue and for which they will be sued," drawing a round of applause. He also questioned why such allegations would be leveled for the first time just weeks before the special election in spite of his decades in public life.

"Why would they come now? Because there are groups that don't want me in the United States Senate," he said, naming the Democratic Party and the Republican establishment and accusing them of working together. He added, "We do not plan to let anybody deter us from this race."

Journalists were not allowed inside the event held at Huntsville Christian Academy, CBS affiliate WHNT reports. WHNT spoke to a few of the attendees after the event.

"I didn't have a change in my opinion of Judge Roy Moore. I really don't have one. I haven't formed one yet. I'm a Democrat, I'm not a Republican, but I wanted to hear his views unfiltered and unedited," said Don Daniel.

"He denied them, but besides that, he also said that he was considering suing the Washington Post over it," said Nate Matthews.

Matthews is an 18-year-old who plans to cast a ballot in the special election on December 12th. He says Moore's response to the allegations reaffirmed his belief that they are false.

"When they first came out I thought that maybe they were true, but after hearing him speak, I'm sure he's telling the truth," Matthews said.

Tom Fredricks, a Republican running for the District 4 seat for the Alabama House of Representatives, told WHNT that he believes the idea that Luther Strange should be a write-in candidate will not become a reality at the polls.

Toomey did not rule out the possibility that Senate Republicans might work to unseat Moore if he wins the special election against Democrat Doug Jones.

"You know, this is a terrible situation, nearly 40-year-old allegation, we'll probably never know for sure exactly what happened," Toomey said on "Meet the Press" on NBC. "But from my point of view, I think the accusations have more credibility than the denial. I think it would be best if Roy would just step aside."

The White House, pointedly noting that President Donald Trump did not back Moore during the primary, said Trump will likely weigh in on the Senate race when he returns from Asia later this week. The White House has already made clear that Moore should step aside if the allegations are proven to be true.

"I think there's a special place in hell for those who actually perpetrate these crimes," White House legislative aide Marc Short said Sunday.

"But, having said that, he hasn't been proved guilty," Short added. "We have to afford him the chance to defend himself."

Moore is an outspoken Christian conservative and former state Supreme Court judge. The Post reported last Thursday that he had sexual contact with a 14-year-old girl and pursued three other teenagers decades earlier.

While he called the allegations "completely false and misleading," in an interview with conservative radio host Sean Hannity he did not wholly rule out dating teenage girls when he was in his early 30s. Asked if that would have been usual for him, Moore said, "Not generally, no."

The story stirred concern among anxious GOP officials in Washington in a key race to fill the Senate seat once held by Jeff Sessions, now the U.S. attorney general. Losing the special election to a Democrat would imperil Republicans' already slim 52-48 majority in the Senate, which is hoping to pass a tax overhaul later this year.

But a Moore victory also would pose risks if he were to join the Senate GOP with a cloud of sexual misconduct allegations.

In the immediate aftermath of the Post report, a wave of national Republican leaders called for Moore to drop out of the race if the allegations are true. They included the head of the House Freedom Caucus, Rep. Mark Meadows of North Carolina, Senate Majority Leader Mitch McConnell of Kentucky and Texas Sen. Ted Cruz.

Over the weekend, more Republicans distanced themselves from Moore.

"Look, I'm sorry, but even before these reports surfaced, Roy Moore's nomination was a bridge too far," tweeted Sen. Bob Corker, R-Tenn., on Saturday.

"Certainly, the allegations are very, very strong. The denial was not as strong as the allegations," Scott said. "If the allegations are true, there is no doubt he should step aside. And not for the party, but for the American people. We have to find a way to restore trust and confidence in our elected officials in our government, and this goes in the wrong direction."

Even if Moore were to step aside, his name would likely remain on the ballot. And any effort to add Strange as a write-in candidate would threaten to divide the GOP vote in a way that would give the Democratic candidate a greater chance of winning. Moore beat Strange in the Republican primary in September.

Mindful of the stakes, Democrats on Sunday appeared largely content to let Republicans debate whether Moore should be their standard bearer in the race.

"Look, we all know that Alabama is a very tough state politically for Democrats, but this is a special situation where we have a great candidate," said Sen. Chris Van Hollen of Maryland, the chairman of the Democratic Senatorial Campaign Committee.

"On the other hand, you have a very, very flawed candidate in Roy Moore, which is why many people are calling upon him to step down, but I'm going to leave this to the people of Alabama. This is their decision," he said.

Toomey and Short appeared on NBC's "Meet the Press," Scott spoke on CBS' "Face the Nation," and Van Hollen was on "Fox News Sunday."