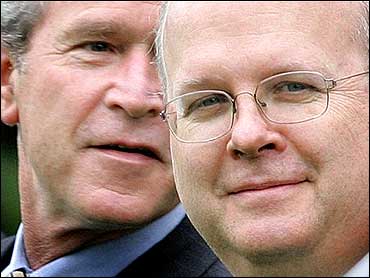 Loyalty has its limits, even for President Bush.

Mr. Bush, who has a reputation for sticking with allies through tough times, has shown two longtime advisers to the door and scaled down the role of his chief political strategist.

Washington is wondering, who's next? Treasury Secretary John Snow's name is the first mentioned by Republican insiders.

The latest moves in a widening shake-up came Wednesday when Karl Rove, the architect of Mr. Bush's rise to the White House and his re-election, surrendered a key policy role and press secretary Scott McClellan resigned. The announcements followed the March 28 resignation of White House chief of staff Andy Card, who left to calm Republican anxieties that Mr. Bush's presidency was going down a troubled path.

Rove gave up his responsibilities as chief policy coordinator, a position he assumed just over a year ago and that strengthened his influence over matters ranging from homeland security and domestic policy to the economy and national security. The promotion had left him stretched too thin in the eyes of some officials, as the White House grappled with mounting problems.

Sources tell CBS News there was a general feeling that Rove had way too much on his plate, and that he had a meeting with the president in which Mr. Bush said to him, "Number one, I want you to focus on retaining Republican control of the Congress.' And, number two, 'I want you to focus on those big issues, like immigration reform, like tax cuts, those issues that are going to define the rest of my presidency.'"

A major force in the administration from the start, Rove still is expected to have a big voice in policy but not the day-to-day oversight. Those responsibilities will shift to Joel Kaplan, who was promoted to deputy chief of staff from the No. 2 job in the White House budget office, where he had served as Joshua Bolten's lieutenant.

Bolten took over Friday as chief of staff with authority to do whatever he deemed necessary to stabilize Mr. Bush's presidency. He has moved quickly to make changes.

With the Iraq war hanging over Mr. Bush, the White House has been rocked by mistakes and missteps, from an ill-fated Supreme Court nomination to a bungled response to Hurricane Katrina, that have resulted in the president's plunge in the polls to the lowest point since he took office. Nervous Republicans told Mr. Bush he needed fresh people with new ideas.

McClellan, the press secretary for nearly three years, was the public face of the White House and a vulnerable target in an administration trying to show off new people. He had been bloodied by contentious press briefings and media criticism about an administration loath to give up information.

"The White House is going through a period of transition. Change can be helpful, and this is a good time and good position to help bring about change," McClellan said, his voice choked with emotion as he stood alongside Mr. Bush outside the White House. "I am ready to move on."

In recent months, McClellan had told people he enjoyed his job and wanted to stay for the long term. He said Wednesday he started to think about leaving in the past few weeks and concluded, with a new chief of staff, that it was a good time to go. He and Mr. Bush came to a decision in a meeting Monday in the Oval Office.

"It's going to be hard to replace Scott," Mr. Bush said. "But, nevertheless, he's made the decision and I accept it. ... Job well done."

Mr. Bush patted McClellan on the back and they walked together across the South Lawn to the president's helicopter to begin a trip to Alabama. But the aircraft couldn't get off the ground because its radio failed, and they had to take a motorcade.

More changes are expected but not before next week. White House officials have done nothing to discourage speculation that Snow is leaving. Bush's communications chief, Nicolle Wallace, also is expected to depart because her husband has taken a new job in New York. Changes also are expected in the White House lobbying shop run by Candida Wolff.

Though the White House has interviewed high-profile business leaders, such as John Mack of Morgan Stanley and Henry Paulson of Goldman Sachs, neither was interested.

In the case of Treasury, the Bush administration wants someone who can better sell what officials consider a strong economic picture, as well as keep Wall Street happy, but so far they just can't find that person, reports CBS News White House Correspondent Jim Axelrod.

The shake-up began with the resignation of Card, Mr. Bush's longtime chief of staff, and his replacement by Bolten. Just this week, Mr. Bush has named a new budget chief and a new trade representative and is moving toward choosing a new domestic policy adviser

Rove and Joe Hagin, who oversees White House administration, intelligence and national security, will remain as deputy chiefs of staff.

Rove still is under investigation by Special Counsel Patrick Fitzgerald for his role in the leak of Valerie Plame's CIA identity.

The episode also brought problems for McClellan. At first, he denied Rove had played any part in the leak, saying he based his account on Rove himself. But later it was revealed that Rove had been a source for at least two reporters.