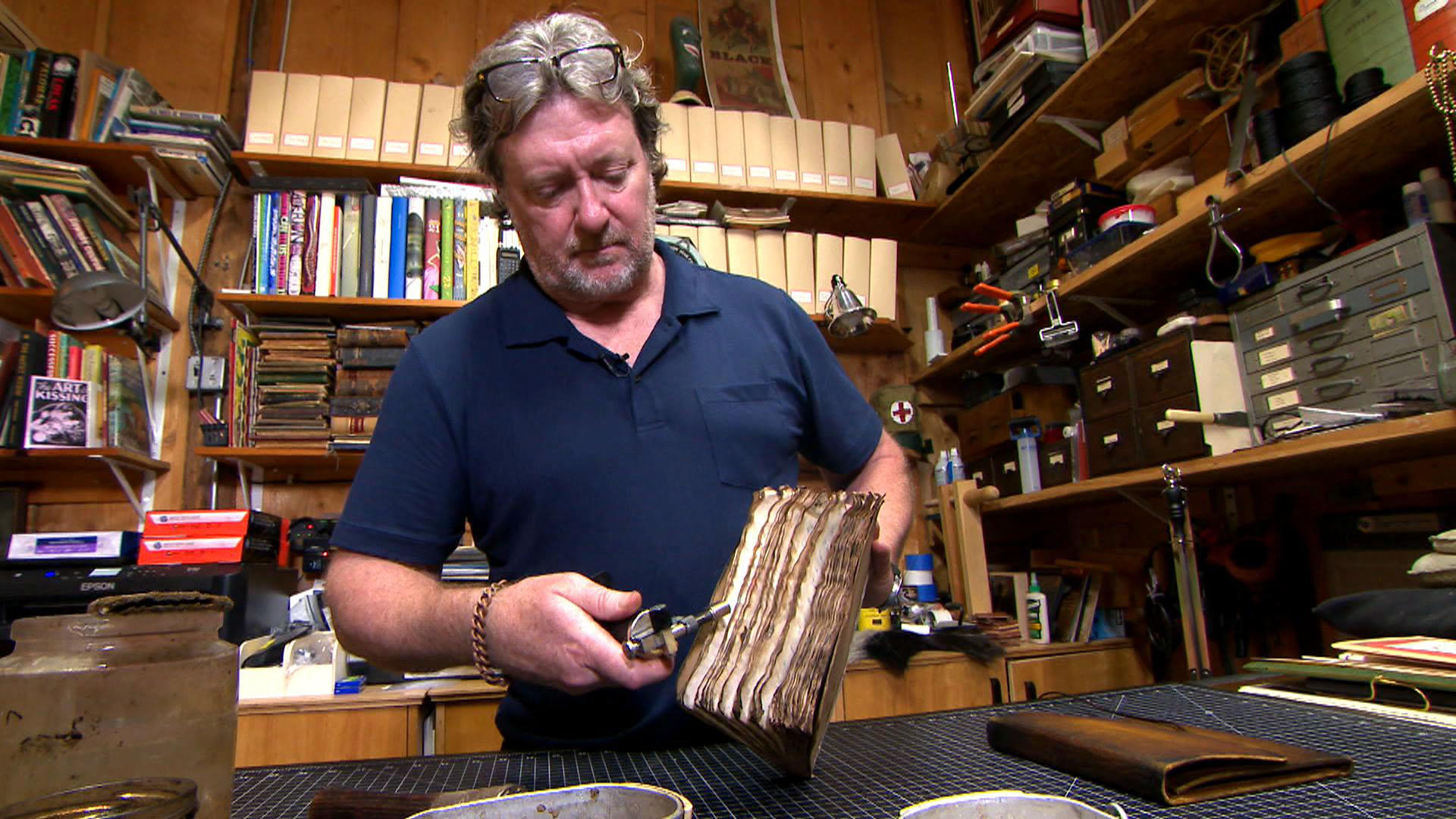 Props are an integral part of movie-making. Whether they're lightsabers in "Star Wars," Indiana Jones' whips, Yorick's skull in "Hamlet" or the famed book of secrets in "National Treasure: Book of Secrets," props can become as iconic as a film's character.

One prop designer, Ross MacDonald, was a printer and illustrator when a call from filmmaker John Hughes changed his life. Hughes asked MacDonald to create a book for his film "Baby's Day Out."

MacDonald obliged, and ever since, he's gone Hollywood.

He has an impressive collection of antique type. But upstairs in his Connecticut workshop, MacDonald keeps a different set of tools.

"That's a bone saw," MacDonald told CBS News' Anthony Mason. "I use it for sawing the back spine of book blocks."

MacDonald is a master craftsman who can make a new book look a century old. He creates many of the signs and documents you see on screen.

"It's dangerous to go to the movie theatre with me 'cause, you know, 'Hey, everybody, look. Hey!" MacDonald said.

For the sitcom "Parks and Recreation," he created the 1817 Pawnee Town Charter.

In the script, only a couple of articles were spelled out. "So I actually had to write copy for the rest of the charter," MacDonald said.

He also made the official paperwork for the CBS series "Madam Secretary."

MacDonald said that 75-80 percent of the work for period props can be background research. "I love it," he said.

He also said he's a stickler for detail. When he sees a movie that isn't historically accurate, it doesn't go well.

It's harder still when one of his carefully crafted props gets little screen time -- like the period passport he made for "Boardwalk Empire."

"This is Nucky Thompson's passport. And these are actual stamps. They're printed and perforated," MacDonald said. "I made the stamps."

But all anyone actually saw of it on screen was a short shot of Nucky handing it to someone. The book is barely visible.

MacDonald said that made him feel a bit like an actor who'd been cut out of the film.

MacDonald's most famous prop appeared in "National Treasure: Book of Secrets." He created the fictional book passed down from George Washington to all future presidents that holds the country's darkest secrets.

"Because they were sort of writing the script on the fly for this, they just said, 'create a Book of Secrets.' So I said, 'Okay, Area 51, JFK assassination, the fake moon landing.' And then I just made up a bunch of crazy stuff, too. I made up stuff about the Titanic. ... It was so much fun."

The movie has a scene hinting that something significant is on page 47 of MacDonald's book.

"I get letters from kids saying 'what's on page 47?'" MacDonald said.

MacDonald laughs as he reveals that page 47 is completely blank.