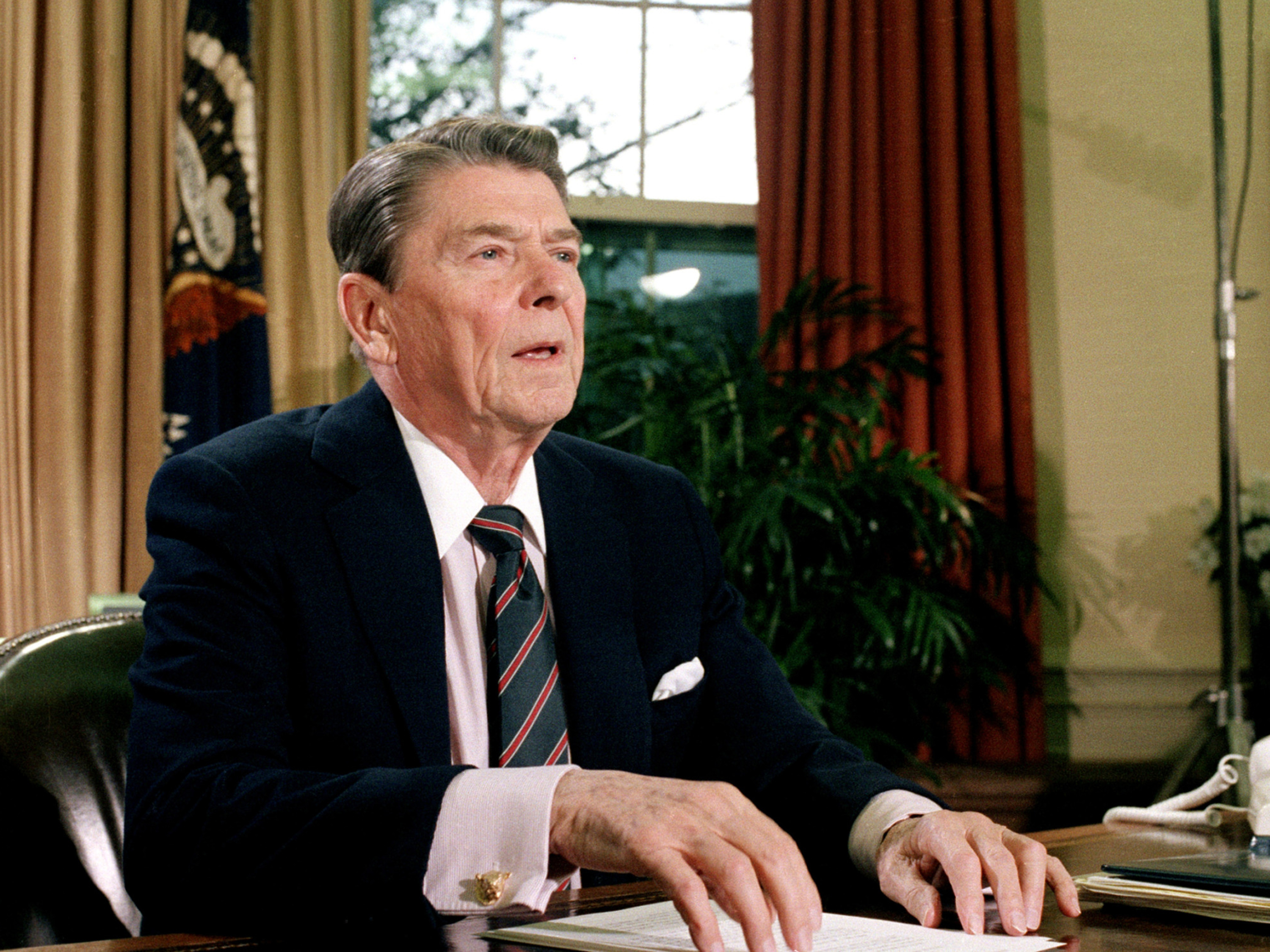 Today marks what would have been the 100th birthday of President Ronald Reagan, the nation's 40th president. In the fall of 1988, as Reagan's presidency was ending, 60 percent of Americans approved of the job he was doing; just 30 percent disapproved. Among recent U.S. presidents, only Bill Clinton has exited the presidency with a higher approval rating.

While Reagan ended his time in office with high ratings, his popularity fluctuated throughout his presidency.

What Reagan Would Think of His 100th Birthday
Reagan Myth Doesn't Square with Reality
Reagan: The "60 Minutes" Interviews, 1975-1989

CBS News' took its first measure of Reagan's presidency in April 1981, soon after he survived an assassination attempt, and the poll found 67 percent of Americans approved of the job he was doing.

During most of his first year in office, Reagan's approval rating hovered in the high 50s, but with the country mired in an economic recession and unemployment at 10 percent, his ratings declined. Throughout 1982 and most of 1983 his approval ratings remained below 50 percent. In January 1983, only 41 percent of Americans approved of the job Reagan was doing -- it would be the lowest rating of his presidency.

(At left, CBS News correspondents and producers tell their best stories about Reagan)

But as the economy began to rebound and unemployment declined, Reagan's ratings rebounded too. Heading into Election Day in 1984, 58 percent of Americans approved of his job performance, and he was easily reelected carrying 49 states. Reagan received some of his highest ratings in 1985 and 1986. In 1986, he reached an approval rating of 67 percent twice (in June and October) -- matching the rating he received when CBS News first measured it in 1981.

However, the end of 1986 brought the Iran-Contra scandal which saw high-profile investigations by Congress and the Tower Commission. The scandal negatively impacted the Reagan presidency and by February 1987, Reagan's approval rating dropped to 42 percent.

Things did turnaround for President Reagan in 1988, his last year in office. An arms control treaty with the Soviet Union and other signs of a warming trend in East-West relations helped restore Reagan's popularity which likely helped elect his vice president, George H. W. Bush, to the presidency.

(At left, Reagan's interviews on "60 Minutes" through the years)

As Reagan left office, Americans who approved of his job performance were more likely to cite domestic rather than foreign policy issues as reasons why they felt that way. Improving the economy, creating more jobs, or the general sense that "things had gotten better" were some of the items mentioned.

Today, most Americans look back favorably on Reagan's presidency. A CNN/Opinion Research Corporation conducted in January found 68 percent of Americans approved of the way he handled his eight years in office, compared to 26 percent who disapproved.

Palin: America Out of Step with Reagan Values
Ron Reagan: No Link Between Palin and My Dad

Jennifer De Pinto is manager of election and survey information for CBS News. You can read more of her posts in Hotsheet here.

Transcript: H.R. McMaster on "Face the Nation," Oct. 2, 2022
Thanks for reading CBS NEWS.
Create your free account or log in
for more features.
View CBS News In
CBS News App Open
Chrome Safari Continue
Be the first to know
Get browser notifications for breaking news, live events, and exclusive reporting.