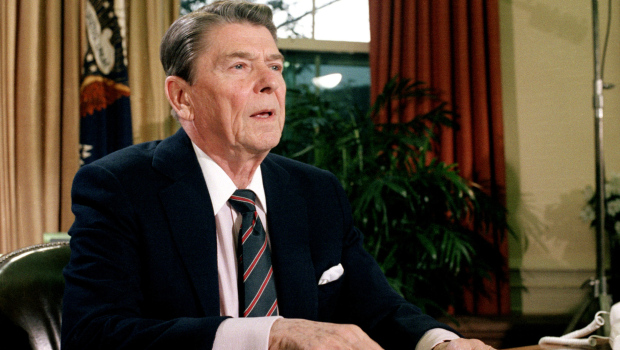 About 10,000 people will gather this weekend at the Ronald Reagan Presidential Library in California to honor what would have been the 100th birthday of former President Ronald Reagan -- among them Dick Cheney, the Beach Boys and Sarah Palin.

Reagan, who served as president from 1981 -1989 and died in 2004 at the age of 93, is widely considered the patron saint of conservatives; ask a prominent conservative their hero, and odds are they'll point to the Gipper. (The adulation is so widespread that candidates at a debate last month among the candidates to be RNC chairman were asked their hero - "aside from President Reagan.")

Reagan is perhaps most often invoked by those who cast him as having held the line against tax increases. Americans for Tax Reform President Grover Norquist, for example, often points to Reagan when calling for lower taxes and spending cuts; he says, by contrast, "tax hikes are what politicians do when they don't have the determination or the competence to govern." Conservatives also hail Reagan as a budget cutter willing to make hard choices to keep spending in line.

It's certainly true that Reagan entered office as a full-throated conservative vowing to cut both spending and taxes. And he quickly followed through on part of that promise, passing a major reduction in marginal tax rates. (According to author Lou Cannon, the top marginal rate fell from 70 percent when he came into office to 28 percent when he left.)

But following his party's losses in the 1982 election, Reagan largely backed off his efforts at spending cuts even as he continued to offer the small-government rhetoric that helped get him elected. In fact, he went in the opposite direction: His creation of the department of veterans affairs contributed to an increase in the federal workforce of more than 60,000 people during his presidency.

And while Reagan somewhat slowed the marginal rate of growth in the budget, it continued to increase during his time in office. So did the debt, skyrocketing from $700 billion to $3 trillion. Then there's the fact that after first pushing to cut Social Security benefits - and being stymied by Congress - Reagan in 1983 agreed to a $165 billion bailout of the program. He also massively expanded the Pentagon budget.

(at left, CBS News correspondents and producers share their best memories of Reagan)

"Ronald Reagan was never afraid to raise taxes," historian Douglas Brinkley, who edited Reagan's diaries, told NPR. "He knew that it was necessary at times. And so there's a false mythology out there about Reagan as this conservative president who came in and just cut taxes and trimmed federal spending in a dramatic way. It didn't happen that way. It's false."

It's important to note that Reagan's tax increases did not wipe out the effects of that initial tax cut. But they did eat up about half of it. And as Peter Beinart points out, the 1983 payroll tax hike went to pay for Social Security and Medicare. ("Reagan raised taxes to pay for government-run health care," Beinart writes.) Reagan also raised the gas tax and signed the largest corporate tax increase in history, an act Joshua Green writes would be "utterly unimaginable for any conservative to support today."

Reagan was not happy about raising taxes or expanding government, and we certainly shouldn't forget that he had to work within the constraints placed upon him by a non-compliant Congress. But that doesn't change the fact that Reagan both increased spending and, after the initial cut, showed a willingness to raise taxes - exactly the sort of policy prescriptions so widely condemned by today's Reagan-reverent conservatives.

These facts have largely been lost as the right has enshrined Reagan as its patron saint, and they may fade further amid the speeches at this weekend's centennial celebration. But the reality is that Reagan was a president who held firm beliefs but was also willing to work with his ideological opponents. And that's the sort of thing that doesn't much lend itself to mythmaking.