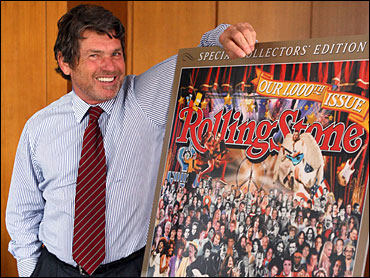 Rolling Stone magazine celebrates its 1,000th issue this week with a burst of rock 'n' roll excess: a glitzy Manhattan party with the Strokes as house band and a 3-D cover that mimics the Beatles' "Sgt. Pepper" sleeve and cost nearly $1 million to produce.

It's an audacious sign of how Rolling Stone, which has numbered its issues since Jann Wenner put out No. 1 in 1967, remains dominant even with changing times and music.

Rolling Stone loves to mark special occasions with special issues; this time, it's focusing on its covers, which has long served as a barometer of who is popular, reports CBS News correspondent Richard Schlesinger. Dr. Hook once sang of the thrill musicians get when they're "On the Cover of Rolling Stone." At Wenner Media's office in New York, all the covers are lined up on hallway walls, starting with John Lennon on RS No. 1.

"The cover is iconic," Wenner said. "The cover, more than any other thing we do, resonates in people's minds. By and large the greatest things we've done, the greatest stories, have had the greatest covers."

The 3-D cover is pure Wenner. Much like Beatles fans pored over the pastiche of faces on "Sgt. Pepper," he wants readers to study his cover for their own cultural reference points. There's Chuck Berry duck-walking, Madonna grabbing her crotch, Bono with a microphone and even — upon very close inspection — Waldo.

Wenner believes it's the costliest magazine cover ever. He denies with an expletive reports that the magazine's publisher, Steve DeLuca, left in February because his boss was pinching pennies on the party.

The issue is clogged with details like Wenner's favorite cover (Annie Leibovitz's portrait of John Lennon and Yoko Ono taken hours before Lennon was shot) and the most memorable cover headline ("He's Hot, He's Sexy and He's Dead" about Jim Morrison). Mostly, it's a nostalgic look at a time when the magazine spoke for a generation and an art form.

Getting on Rolling Stone's cover "wasn't just publicity, the way all magazine covers have become," comic Steve Martin writes in RS 1000. "It was in itself an artistic achievement."

When he first saw his face upfront, Tom Petty said, "I felt I had arrived."

Although Rolling Stone's circulation has been flat the past few years at slightly more than 1.3 million, it still comfortably leads other music-oriented magazines such as Vibe (836,000) and Blender (693,000), according to the Capell Circulation Report.

"Rolling Stone is so clearly the big dog," said Alan Light, former editor of Vibe, Spin and the late Tracks magazines who did freelance work for this most recent RS issue. "They're the biggest player on the table and you can't go into that space without defining yourself in some way in relation to Rolling Stone — it's an urban Rolling Stone, or a younger Rolling Stone or it's not Rolling Stone."

The magazine tries to walk the tightrope of appealing to its original subscribers yet also attracting readers born two decades after "Sgt. Pepper" was released.

"The average age of our audience is 28 years old," Wenner said. "When I started it was 21. In 40 years, it's aged like seven years. We keep bringing in new readers and holding the old readers."

No other music magazine "has put a glove on us editorially," Wenner said.

"Our competitors — God bless them all — you can't think of one memorable article, interview or issue they've ever done, whereas Rolling Stone keeps knocking them out of the park," he said. "Can you think of one great Blender issue?"

Retorted Craig Marks, Blender editor in chief: "Of course I can.

"How about the issue we did featuring the pampered offspring of such baby boomer legends as Art Garfunkel?" he said. "Oh, wait. That was Rolling Stone. OK, then, how about the one where we broke the news that Jim Hendrix was still dead?

"Shoot, that was Rolling Stone, too. Perhaps if Jann wasn't so busy reliving his magazine's bygone glory years, he'd realize that music fans — not to mention contemporary superstars U2, Gwen Stefani and Coldplay, among many — have long ago turned away from their dad's publication and instead turned to Blender."

Marks wouldn't talk further about his competitor unless it was for an article that equally discussed Blender's fifth anniversary.

Blender clearly rattled Rolling Stone at the outset. While "it hasn't proven to be real competition," Wenner said, he admitted to stealing ideas like running more and shorter music reviews.

After briefly trying to reinvent itself and appearing lost as a result, Rolling Stone returned to its original template, said Samir Husni, a University of Mississippi journalism professor who publishes an annual guide to consumer magazines.

"We have nothing like it," Husni said. "We have nothing that really combines the music as the jumping point toward politics, national affairs, business. Rolling Stone is really unique in that respect."

Rolling Stone's interest in things besides music is key to its success and longevity, Wenner said. Hunter S. Thompson became famous because of his political and social reportage in Rolling Stone. So did P.J. O'Rourke.

It's all filtered through Wenner's distinctly liberal point of view; he has autographed pictures of Bill Clinton and Al Gore hanging outside his office. RS No. 999's cover story had historians speculating whether George W. Bush was the worst president ever.

"There's no question in anybody's mind that the No. 1 story the last two or three years has been the war in Iraq and Bush," he said. "People are obsessed with it and furious. I am, personally. Beyond that, it's just good journalistic sense."

Rap, punk rock, emo, death metal, alt country — all are musical genres that emerged since Rolling Stone's birth and all have publications that cater to them. It's harder for Rolling Stone to have the impact it used to have because there's no real cultural center anymore and a voracious media is covering subjects that Rolling Stone virtually had to itself at the beginning, Light said.

But nothing has really replaced it.

"How can you be a general interest pop culture magazine when there isn't a general interest listener?" Light asked. "There's a bunch of stratified listeners with different interests. What would you do differently with that magazine? I have yet to have anybody come up with a really good answer."

The mercurial Wenner, who edited every piece in the anniversary tribute, is still an enthusiastic music fan who boasted of seeing Bruce Springsteen, David Bowie, Weezer, U2, the Rolling Stones twice and Bob Dylan three times in a four-month period.

He's also now 60, at the vanguard of his generation. He said he figures to have another five, 10 years in his current job, and insists he'll be able to lie on a beach somewhere as an old man and read a Rolling Stone that he had nothing to do with.

"It's important to me that the future is provided for, that it will keep going," he said. "You work all your life on something, you want to keep it going."