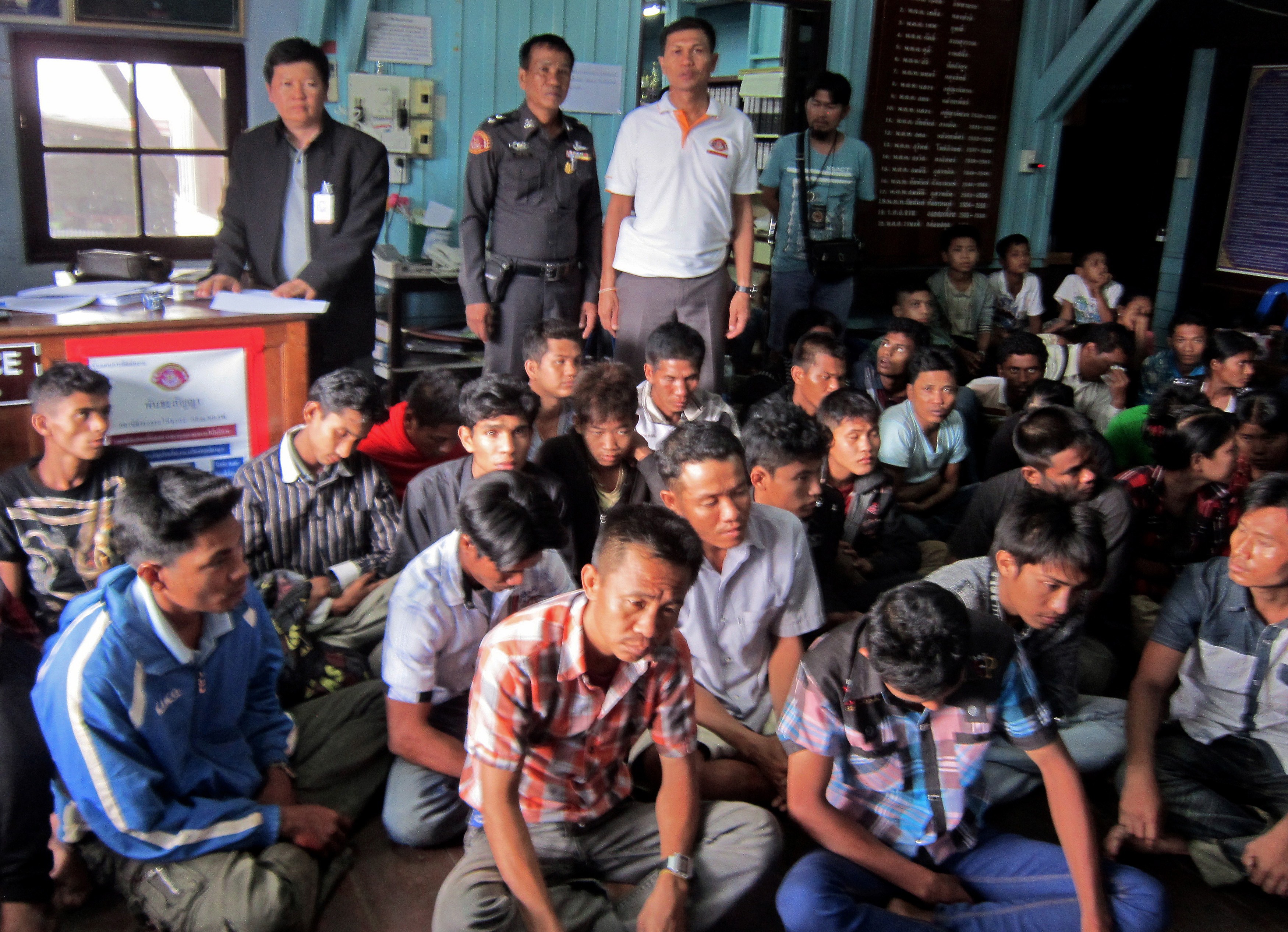 JAKARTA, Indonesia -- Hundreds of migrants abandoned at sea by smugglers in Southeast Asia have reached land and relative safety in the past two days. But an estimated 6,000 Bangladeshis and Rohingya Muslims from Myanmar remain trapped in crowded, wooden boats, migrant officials and activists said Monday. With food and clean water running low, some could be in grave danger.

Worried that vessels will start washing to shore with dead bodies, the U.N. High Commissioner for Refugees, the United States and several other foreign governments and international organizations held emergency meetings in recent days, but participants say there are no immediate plans to search for vessels in the busy Malacca Strait waterways.

One of the problems was determining what to do with the Rohingya if a rescue was launched, participants said on condition they not be named.

Seven boats were rescued Sunday after human traffickers abandoned the ships and left passengers to fend for themselves, officials said. Nearly 600 migrants were brought to shore in western Indonesia and just over a thousand others to Malaysia's Langkawi island.

Denied citizenship in Myanmar, the Rohingya are effectively stateless.

"At this point, I'm not sure what the concrete next steps are or should be," said Vivian Tan, the UNHCR's regional press officer in Bangkok, Thailand. "There is a real sense of urgency, but there doesn't seem to be a clear mechanism in this region for responding to something like this."

Moreover, she said, the location of the boats and the number of people on board needed to be clarified.

Some weak and hungry survivors waded to shore, others swam.

The Rohingya, who are Muslim, have for decades suffered from state-sanctioned discrimination in Buddhist-majority Myanmar, which considers them illegal settlers from Bangladesh even though many of their families arrived generations ago.

Attacks on members of the religious minority, numbering at around 1.3 million, have in the last three years left up to 280 people dead and forced 140,000 others from their homes. They now live under apartheid-like conditions in crowded camps just outside the Rakhine state capital, Sittwe, where they have little access to school or adequate health care.

The conditions at home - and lack of job opportunities - have sparked one of the biggest exoduses of boat people since the Vietnam War.

Chris Lewa, director of the non-profit Arakan Project, which has been monitoring boat departures and arrivals for more than a decade, estimates more than 100,000 men, women and children have boarded ships since mid-2012.

Most are trying to reach Malaysia, but recent regional crackdowns on human trafficking networks have sent brokers and agents into hiding, making it impossible for migrants to disembark - in some cases even after family members have paid $2,000 or more for their release, she said.

Lewa believes up to 7,000 Rohingya and Bangaldeshis are still on small and large boats in the Malacca Strait and nearby international waters, some after more than two months at sea.

"I am very concerned about smugglers abandoning boatloads at sea," she said.

Tightly confined, and with limited access to food and clean water, their health is deteriorating, Lewa said, adding that dozens of deaths have been reported.

Police found a big wooden boat late Sunday night trapped in the sand in shallow waters at a beach in Langkawi and have since located 865 men, 101 women and 52 children, said island deputy police chief Jamil Ahmed. He added many appeared weak and thin and that at least two other boats have not been found.

He said a Bangladeshi man told police the boat handlers gave the passengers directions on where to go once they reached Malaysian shores before abandoning the group and escaping into other boats.

"We believe there may be more boats coming," Jamil said.

When the four ships neared Indonesia's shores, some passengers jumped into the water and swam, said Steve Hamilton, of the International Organization for Migration in Jakarta, Indonesia's capital.

They have been taken to a sports stadium in Lhoksukon, the capital of North Aceh District, to be cared for and questioned, said Lt. Col. Achmadi, chief of police in the area, who uses only one name.

Some were getting medical attention.

"We had nothing to eat," said Rashid Ahmed, a 43-year-old Rohingya man who was on one of the boats. He said he left Myanmar's troubled state of Rakhine with his eldest son three months ago.

Thailand has long been considered a regional hub for human traffickers.

The tactics of brokers and agents started changing in November as authorities began tightening security on land - a move apparently aimed at appeasing the U.S. government as it prepares to release its annual Trafficking in Persons report next month. Last year, Thailand was downgraded to the lowest level, putting it on par with North Korea and Syria.

Rohingya packing into ships in the Bay of Bengal have been joined in growing numbers by Bangladeshis fleeing poverty and hoping to find a better life elsewhere.

Up until recently, their first stop was Thailand, where they were held in open pens in jungle camps as brokers collected "ransoms" from relatives. Those who could pay continued onward, usually to Malaysia or other countries. Those who couldn't were sometimes beaten, killed or left to die.

Since May 1, police have unearthed two dozen bodies from shallow graves in the mountains of southern Thailand, the apparent victims of smuggling rings, they say.

Thai authorities have since arrested dozens of people, including a powerful mayor and a man named Soe Naing, otherwise known as Anwar, who was accused of being one of the trafficking kingpins in southern Thailand. More than 50 police officers are also under investigation.