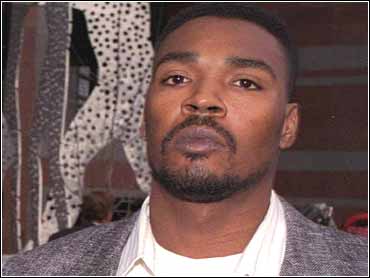 Rodney King, whose videotaped beating led to the deadly 1992 riots in Los Angeles, was hospitalized with a broken pelvis after he lost control of his SUV while weaving through traffic at 100 mph and crashed into a house, police said.

King, 39, was spotted Sunday by a police officer who said King was speeding and weaving through traffic in his 2003 Ford Expedition when he slammed into a utility pole, a chain-link fence and then the home, police said. No one in the home was injured.

King was in fair condition Monday afternoon, hospital spokesman Jorge Valencia said. His condition was not available Tuesday as hospital officials did not answer phone calls.

Police said they suspect that King was intoxicated, and a blood sample was drawn to determine his blood-alcohol level. Test results have not yet been released.

King was not arrested, but a report detailing the crash circumstances will be submitted to prosecutors, police Lt. Kathy Thompson said.

King, who is black, was chased by police through the San Fernando Valley in 1991 and was captured on videotape being beaten by four white officers.

After their acquittal, riots broke out and lasted for four days, leaving 55 dead and more than 2,000 injured. The mayhem caused $1 billion in property damage.

King later received a $3.8 million settlement from the city of Los Angeles in 1994.

He was convicted of spouse abuse in 1999 in San Bernardino County and was sentenced to 90 days in jail and four years probation.

King pleaded no contest to three counts of being under the influence of PCP and a count of indecent exposure in October 2001. A judge gave King a year in a drug treatment center even though a prosecutor argued King should spend a year in county jail.

Rialto, where King lives, is 53 miles east of Los Angeles.