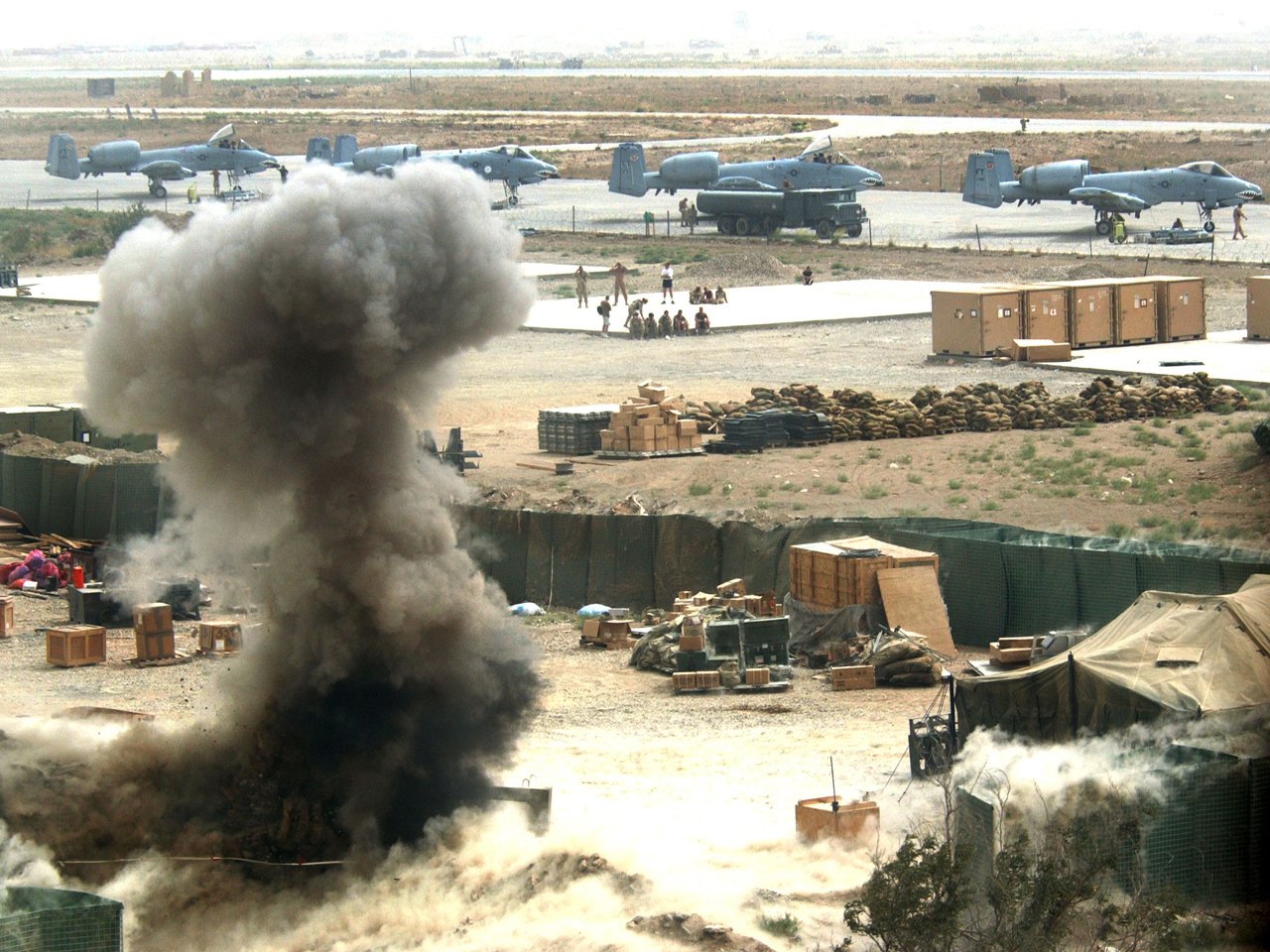 The ground trembled with the explosion as the rocket crashed down somewhere inside the sprawling Bagram Airbase. Then came another. The military calls it IDF: indirect fire.

Then came the next warning: "IDF impact. Shelter in place and don IBA (individual body armor) where possible."

We jumped into our boots and made our way to the bunker just outside the barracks. Our embed with the U.S. Army in Afghanistan had barely begun. We'd been warned that in recent weeks Taliban fighters had increased rocket and mortar attacks on Bagram.

But Bagram was only the first step toward our eventual destination: the front lines of Eastern Afghanistan, where U.S. forces still have a lot to do, as they draw down troop numbers while wrapping up the last fighting season against a persistent enemy in an area roughly the size of Virginia.

The Taliban had already brought their fight to us. The rockets didn't do any damage, striking harmlessly in a wide open space. Luckily, that's the case with most of them.

The next day we met Lt. Col. Juanita Chang, the Public Affairs Director for the volatile area known as Regional Command East, along the border with Pakistan. We waited to receive our marching orders.

She told us that in the last six months, across her patch, RC East, U.S. and coalition forces had gone from operating out of 58 bases to just 12. They had either been downsized and handed over to Afghan forces, or dismantled all together, "right down to the weeds."

She told us Afghan forces were holding their own, and U.S. troops were only involved in a small percentage of military operations. But in certain areas, the Taliban had actually increased attacks.

"FOB Shank is taking a real beating," she told us. Forward Operating Base Shank, in Logar province, is known among soldiers as "Rocket City" for the number of rockets, mortars and artillery shells that rain down, day and night.

For reasons no one can fully explain, despite a blimp providing 24-hour overhead surveillance, routine perimeter patrols and the near-constant buzz of attack helicopters overhead, militants continue to successfully launch rockets at the base.

As we were discussing our assignment with Col. Chang, a public affairs officer handed her a printout of our next stop. She smiled. "Looks like you guys are going to Shank."

Bagram came under attack again that night, with a rocket hitting the base just after 8 p.m. We were thankful they didn't strike in the early hours. At least we were able to get some sleep.

The next morning we took the helicopter ride to FOB Shank over the jagged peaks and rugged mountain terrain that divides and isolates the region from Bagram.

When we arrived, we were informed that rocket and mortar attacks were treated differently -- taken more seriously -- than at Bagram. We were told that when the warning came, we were to immediately hit the deck, get down on the ground, and wait for the impact. Upon the second warning, confirming the attack -- "IDF impact" -- we were then to get to a shelter as soon as safely possible.

Being much smaller, and therefore more tightly packed than Bagram, the rockets have hit barracks, convoys and occupied buildings at Shank. Everyone had stories to tell of close calls. They showed us where a rocket struck the roof of a barracks. One exploded on a patch of dirt where, minutes before, soldiers had been playing volleyball. We saw the shrapnel scars on a wall from a rocket that hit a convoy of armored vehicles just before they left for a patrol.

We didn't have to wait long to see for ourselves. Within hours of our arrival, the first rocket struck. It hit empty space.

The frequent Taliban rocket and mortar attacks are such a lethal menace at Shank that the Army took the unusual step of adapting a Navy weapon usually used to protect aircraft carriers and large ships on the open seas.

The Phalanx Weapon System fires rapid bursts of 20 millimeter, self-detonating rounds designed to either destroy the incoming weapon or knock it off course. It has become an extremely effective, lifesaving line of defense against the constant attacks.

We lay down on the floor and suddenly heard the roar of the Phalanx opening up on whatever was headed our way. Then, a loud THUMP right outside our barracks.

We turned the corner to find a nearby building in flames. The soldiers told us it was a white phosphorus rocket, a terrifying weapon that burns fiercely, igniting buildings, equipment, and people. The Phalanx gun had clipped the rocket, but didn't destroy it completely. It came down in flames but failed to detonate. Nobody wanted to think long about what might have happened if it had.

A few soldiers with fire extinguishers ran to put the fire out, but when they realized the body of the rocket was still intact and in flames, they quickly thought better and decided to defer to the experts, the Explosive Ordnance Disposal technicians.

They evacuated the area. Firefighters parked their fire trucks fifty yards away. We waited three hours while the EOD team did its work. Finally, the message blared out over the loudspeaker: "Attention on the FOB, attention on the FOB, there will be a controlled det. in the next five minutes."

Then, a loud BOOM as they blew up what was left of the weapon, sending a white plume of smoke into the desert night sky. A few people cheered wearily. Everyone went back to what they were doing, waiting for the next round.