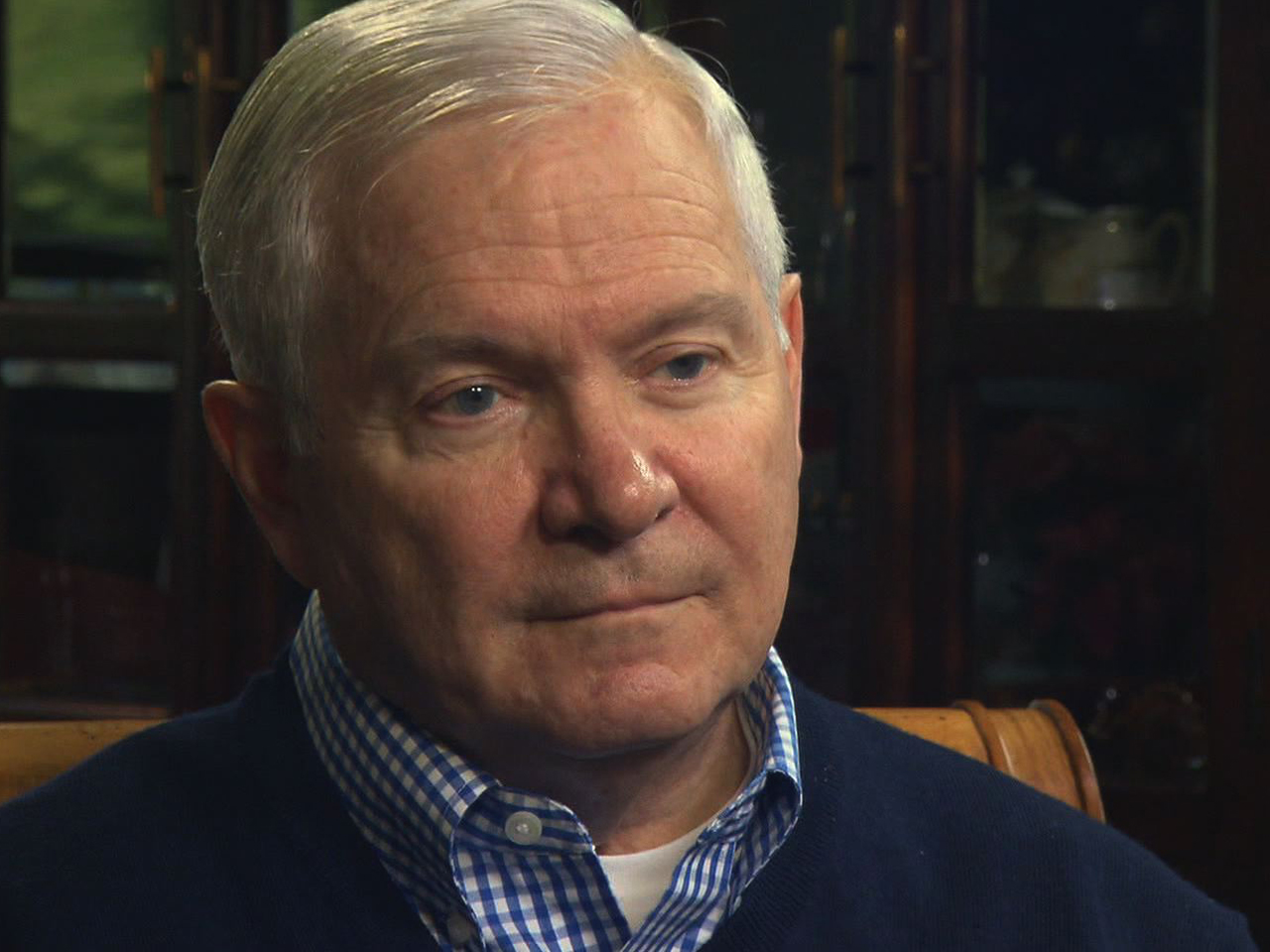 Washington has been abuzz this past week over the new memoir by former Secretary of Defense Robert Gates. Now  Secretary Gates speaks for himself in his first television interview about his book. Our Cover Story is reported by Rita Braver:

Robert Gates doesn't pull any punches about why he now lives in a town outside Seattle: "Well, other than the fact that it's the farthest place from Washington, D.C. …" he laughed.

But it wasn't all that long ago that he was Secretary of Defense -- the first person in history to hold the job under two presidents from two different parties.

And working for both George W. Bush and Barack Obama, Gates won bipartisan praise for his managerial skills, integrity and calm demeanor.

Yet, he says, in private he was often seething.

"So why was I so angry all the time? Why did I want to leave all the time? . . . It's just because getting anything done in Washington was so damnably hard," he said.

After a week filled with leaks, excerpts, and pundits holding forth, it's clear that Gates' new memoir, "Duty," has caused a sensation, and will likely go down in history as one of the most candid assessments ever written by a former Cabinet official.

Take his view of the majority of Congress: "Uncivil, incompetent in fulfilling basic Constitutional responsibilities, parochial, hypocritical, egotistical . . . too often putting self and reelection before country."

"I thought about that sentence a lot," Gates told Braver," and whether it was too strong. And I decided at the end of the day, that that's what I believe."

Gates, now 70, is a former CIA Director, who was serving as head of Texas A&M University when President Bush asked him to replace Donald Rumsfeld as Secretary of Defense in November 2006.

By then the president, he says, had concluded that things were going badly in Iraq, and Gates decided Congress needed to hear the truth.

When asked by Sen. Carl Levin during his Senate confirmation hearing, "Are we winning in Iraq?" Gates replied, "No, sir."

Gates credits President Bush with turning the U.S. effort around by ordering a surge of some 30,000 personnel -- an idea Gates says even he didn't support at first.

He had some other minor disagreements with Mr. Bush. But he was more likely to clash with Vice President Dick Cheney, who did seem to understand that his influence with Mr. Bush had waned.

"Actually, he was pretty good-humored about it," Gates laughed. "He would occasionally say, 'Look, I know I'm alone on this, but here is what I think …'"

Gates' study is filled with military mementos, such as a piece of an MRAP (mine resistant ambush protected vehicle), credited with saving countless lives and limbs in Iraq and Afghanistan.

But Gates had to fight his own war within the Pentagon to get the vehicles produced.

"It's bureaucratic inertia," he explained. "It's an unwillingness to spend money on a war that everybody expected to be over soon. But the key for me was that protecting these young men and women was foremost."

Gates became known as "the Soldiers Secretary." And yet, from everything he wrote in "Duty," "It doesn't sound like you really enjoyed being Secretary of Defense," said Braver.

"I didn't enjoy it," he replied. "There is nothing enjoyable about a job where you put men and women in harm's way for their country's sake."

Yet, in 2008, when newly-elected President Obama asked Gates (a Republican) to stay on, his answer was an unequivocal yes. "I felt it was my duty to those troops, and that didn't end with the Bush administration," he said.

And one of the first orders of business for President Obama was turning things around in Afghanistan, ultimately ordering in some 50,000 additional troops.

Gates praises Mr. Obama for facing down political opposition from his own party. Yet he also offers some tough criticism of the president, suggesting that at times he was skeptical of his own strategy in Afghanistan.

"You say about President Obama that as much as you admired him on so many levels, he never really had a passion for pursuing the war in Afghanistan, and that kind of bothered you," said Braver.

"It's one thing to tell the troops that you support them. It's another to work at making them believe that you believe as president that their sacrifice is worth it, that the cause is just, that what they are doing was important for the country, and that they must succeed," said Gates. "President Bush did that with the troops when I was Secretary. I did not see President Obama do that. As I write in the book, it was this absence of passion, this absence of a conviction of the importance of success that disturbed me."

What's more, he is harshly critical of some of the president's staffers.

He called the national security staff under President Obama the most micromanaging and controlling since Richard Nixon and Henry Kissinger. Braver asked, "Did you ever tell the president about it directly?"

"No," Gates said. "And I acknowledge that in the book."

"Should you have, do you think?"

"Do you have a sense that's changed? Or do you think they are still running things from the White House?"

And then there were his disagreements with the Number 2 man in Washington.

"You are not very flattering to Vice President Biden in this book," said Braver.

"Actually I think I am in some areas complimentary of him," Gates responded, "but where I had a particular problem with the vice president was in his encouragement of suspicion of the military and the senior military with the president: 'You can't trust these guys. They're gonna try and jam you. They're gonna try and box you in,' and so on. And that did disturb me a lot."

The outcry over Gates' criticism of Biden led to that White House solidarity photo op of the president and vice president this past week.

Actually, Gates says, he did occasionally see eye-to-eye with Biden.

"One time when I agreed with him on something -- often Admiral Mullen, the Chairman of the Joint Chiefs, and I would ride back to the Pentagon together from the White House -- and Mullen turned to me at one point [and] said, 'You know that you agreed with the vice president this morning.' And I said, 'Yeah, that's why I'm rethinking my position.'"

As for Secretary of State Hillary Clinton, Gates says he was "dismayed" when he heard her tell President Obama that her opposition to the 2007 troop surge in Iraq had been "political, because she was facing him during the primary season."

But Gates also has high praise for Clinton, saying she became one of his closest allies in the administration.

"The thing that I liked best about Secretary Clinton, other than the fact that she has a great sense of humor, was she is very tough-minded," he said.

"Do you think she'd make a good president?" Braver asked.

'Actually, I think she would," Gates replied.

"And how about Vice President Biden? There is some talk he might run."

"Well, I suppose to be even-handed, I would have to say I suppose he would," he laughed.

Gates says he finally left the Secretary of Defense job in 2011 in large part because he felt that his concern for the safety of American troops might be clouding his judgment -- leading him, for example, to oppose instituting a "no-fly zone" over Libya during the waning days of Muammar Qaddafi's regime.

"I became very emotionally caught up with the troops," Gates said, "and it got to the point where I couldn't speak to them, or about them, without choking up, and that was another reason why I thought it's time to go."

And so he went, and soon began working on his book, which has created such turmoil in Washington since "Sunday Morning" first spoke with him that the Secretary (wearing a neck brace from a recent fall) agreed to talk with Braver again just a few nights ago.

"A lot of questions are being raised about whether it was proper in the first place for a Secretary of Defense to write anything negative about a sitting president, especially on policy matters that are still ongoing," Braver said.

"Here I think you have to look at the entirety of the book, and the fact that it deals with getting into wars [and] getting out of wars," Gates replied. "Frankly, it seems to me that with the experience and perspective of working for eight presidents, and having been Secretary for four and a half years, I didn't think that waiting until 2017 to weigh in on these issues, and in a comprehensive and thoughtful way, made any sense."

"I think what people are troubled by is that you criticize President Obama on actions, particularly on his commitment to the war in Afghanistan, while it's still going on, and people are saying, 'Look, that's just not right,'" said Braver.

"I make very explicit in the book that I agreed with all of the president's decisions on Afghanistan, the ones that he made in 2009 and subsequently," Gates said. His one concern, he said, "is that over the course of 2010 or in 2011 the president began to have his own reservations about whether it would all work. That's not an unfair thing to say."

"In your book, you say that one of your favorite adages is, 'Never miss a good chance to shut up,'" said Braver. "And I wonder if you think that maybe you violated your own advice here? And do you regret anything that you've written?"

No, Gates responded. "I don't. I think that it's an honest account.

"Look, people gave me a lot of credit when I was in office [for] being blunt, and candid about what I felt about things. I could hardly be any less in writing a book."

But Gates says he understands that people will take what they want to take from his book:

"My objective was to stand back and try and provide a non-partisan look at the kind of issues that have riven our country and riven our government for the last number of years."

These days, instead of moving in the highest reaches of government, Gates now works as a private consultant, and savors the time he can spend with Becky, his wife of 47 years, and their two grown-up children.

Braver asked both Robert and Becky Gates, if they could ever imagine going  back and taking a big government job.

"That's why I could write the book I did," he laughed.

Still, looking back, was Gates glad he took the job of Secretary of Defense -- and that he stayed?

He replied, "It was the greatest honor of my life, bar none."