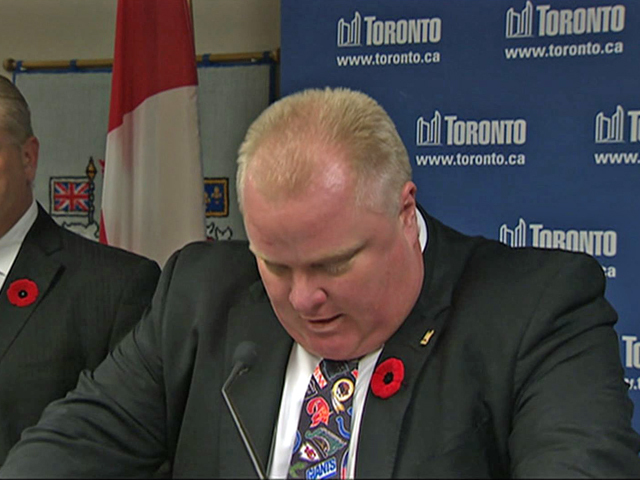 (CBS/AP) - Embattled Toronto Mayor Rob Ford apologized for embarrassing the people of the city and told them he has "nothing left to hide" during a press conference Tuesday, held only hours after he admitted to a group of reporters that he smoked crack cocaine "probably a year ago" during a "drunken stupor."

PICTURES: Politicians in trouble with the law

"These mistakes will never, ever, ever happen again," said a red-faced, visibly emotional Ford.

"I know admitting my mistake was the right thing to do, and I feel 1,000 pounds have been lifted off my shoulders," Ford said.

The mayor did not say he would not resign, telling reporters,  "The past is the past and we must move forward...There is important work that we must advance and important decisions that must be made...We must get back to work immediately."

He continued, saying, "On Oct. 27, 2014, I want the people of this great city to decide whether they want Rob Ford to be their mayor."

That's the date of the city's next mayoral election.

Last week, police said they had obtained a copy of a videothat appears to show the mayor puffing on a crack cocaine pipe.

"There have been times when I've been in a drunken stupor. That's why I want to see the tape. I want everyone in the city to see this tape. I don't even recall there being a tape or video. I want to see the state that I was in," Ford told reporters Tuesday outside his office.

The video was recovered from a computer hard drive during an investigation of an associate of Ford's who is suspected of providing him drugs. Police have said they don't have grounds to charge the mayor with any crime.

Police have said they want to talk to Ford, but his lawyer has so far declined.

On Sunday, Ford acknowledged making "mistakes" but declined to take aleave of absence or resign.

"I sincerely apologize, there's absolutely no excuse, no one to blame but myself," he said. "I am going to fight like no one has seen before to win the next election" in October 2014.

Later, he told Toronto radio station AM640 in an interview that "I am not a crack addict. I'm not an addict of any type of drug - even alcohol."

All four major Toronto newspapers have called on Ford to resign. Municipal law makes no provision for his forced removal from office unless he's convicted and jailed for a criminal offense.

Even before police announced they had the video, Ford had drawn criticism for erratic behavior.

Ford said Sunday he shouldn't have been drunk in public when he appeared at a street festival in August, calling it "pure stupidity."

He also said he got "a little out of control" after St. Patrick's Day in 2012, when city hall security guards said they witnessed a "very intoxicated" Ford having trouble walking and swearing at aides.