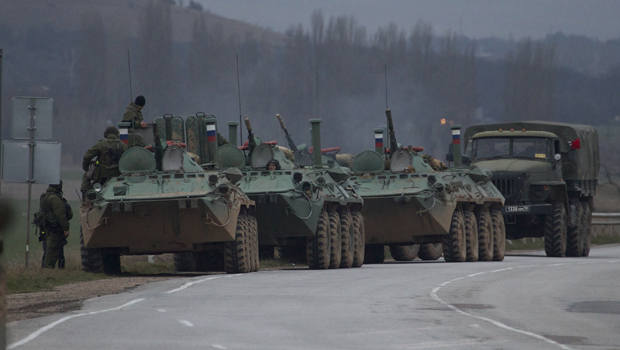 WASHINGTON -- Russian forces moved across the border into the Crimea region of Ukraine on Friday, Ukrainian and U.S. officials said, escalating tensions and prompting President Obama to warn against a military intervention.

"The United States will stand with the international community in affirming that there will be costs for any military intervention in Ukraine," Obama said Friday.

He said that the United States was deeply concerned about the reports of Russian military movements inside of Ukraine.

He noted Russia's historic relationship with Ukraine and the presence of a Russian military facility in Crimea, and added: "But any violation of Ukraine's sovereignty and territorial integrity would be deeply destabilizing, which is not in the interest of Ukraine, Russia or Europe. It would represent a profound interference in matters that must be determined by the Ukrainian people. It would be a clear violation of Russia's commitment to respect the independence and sovereignty and borders of Ukraine, and of international laws."

Top officials told CBS News that there was no consideration of U.S. military action, but that the White House might boycott the Group of Eight economic summit in June in Sochi. New trade talks with Russia that began this week could be canceled.

Defense Secretary Chuck Hagel said that "this could be a very dangerous situation if this continues in a provocative way." Asked about U.S. options in a CBS News interview, he said that "we're trying to deal with a diplomatic focus, that's the appropriate, responsible approach."

U.S. officials said Russia was flying hundreds of troops, maybe more, into Crimea. The officials stopped short of calling it an outright invasion, but one of them said, "This is history being made."

The Russians are landing at a military airfield near the capital of Crimea in what appears to be a classic operation for inserting troops into a foreign country: first seize the airfield, which then serves as the bridgehead to bring in more troops and more equipment.

Churkin said Russia was merely exercising its treaty rights in Crimea. But one U.S. official said that claim would be "a stretch."

The Ukrainian ambassador, Yuriy Sergeyev, said that 10 Russian transport aircraft and 11 attack helicopters had arrived in Crimea illegally, and that Russian troops had taken control of two airports in Crimea.

"Some of them identified themselves as Russians. We know specifically some of the units," Sergeyev said. He also said the Russians had captured the main air traffic control center on Crimea.

A spokesman for the Ukrainian border service said Friday that eight Russian transport planes had landed with unknown cargo.

Serhiy Astakhov told The Associated Press that the Il-76 planes arrived unexpectedly Friday and were given permission to land, one after the other, at Gvardeiskoye air base, north of the regional capital, Simferopol.

Astakhov said that the people in the planes refused to identify themselves and waved off customs officials, saying they didn't require their services.

Russia's Interfax agency cited Serhyi Kunitsyn, a Ukraine presidential envoy to Crimea, telling ATR television that 13 Russian planes carrying 150 Russian troops each landed at Gvardeiskoye air base. That report could not be confirmed.

Ukraine's acting president, Oleksander Turchinov, accused Russia of open aggression and said it was provoking his country in the same way as it had Georgia before going to war in 2008.

"The Ukrainian army will fulfill its obligations but it will not give in to provocations," Turchinov said. Secretary of State John Kerry said that he called Russian Foreign Minister Sergey Lavrov for the second time in two days to press the Kremlin to keep its promise to respect Ukraine's sovereignty and territorial integrity.

Kerry told reporters that Lavrov had once again repeated Putin's pledge to do that while also pointing out that Russia has broad interests in Ukraine, including the major naval base in Crimea.

Kerry and Lavrov are expected to meet Thursday about Ukraine and Syria on the sidelines of a Libya summit in Rome.

Crimea on Friday was tense. The uniformed, masked gunmen in control of the region's two main airports and the parliament refused to identify themselves. They appeared to be some sort of pro-Russian paramilitary force, but their uniforms had no insignias.

Ukraine International Airlines said it had canceled flights to and from the Simferopol airport on Friday evening and Saturday because of the closure of the airspace over Crimea. The announcement did not say who had ordered the closure.

A woman answering the Simferopol airport passenger help line said the airport was not closed but that all flights were canceled "due to the situation in Crimea."

The country's main telecommunications company said landlines and some Internet services were down after fiber optic cables were tampered with.

Kerry reiterated the U.S. view that Russian military intervention in Ukraine following the ouster of the country's Russia-backed leader would run counter to Russia's self-professed opposition to such operations in other countries, such as Libya and Syria.

And Kerry noted that, during his call with Lavrov, fugitive Ukrainian President Viktor Yanukovych was holding a news conference in southern Russia in which he said he was not asking Moscow for military assistance and called military action "unacceptable."

In his appearance before reporters, however, Yanukovych, who still regards himself the president, also vowed to "keep fighting for the future of Ukraine" and blamed the United States and the West for encouraging the rebellion that forced him to flee last weekend.

The White House is already working with the country's new prime minister, Arseniy Yatsenyuk, and a high-ranking U.S. diplomat will soon head to Kiev and will consult with the Europeans and the International Monetary Fund to try to quickly stabilize the young government.

Any Russian military incursion in Crimea would dramatically raise the stakes in Ukraine, which is at the center of what many see as a tug of war between East and West.

One of the catalysts for massive demonstrations that led to Yanukovych's ouster was his rejection of a partnership agreement with the European Union in favor of historical ties with Moscow. That EU agreement would have paved the way for Ukraine's greater integration with the West, including potential affiliation with NATO, something to which Russia strongly objects for former Warsaw Pact members.

Underscoring U.S. concerns are memories of the conflict in Georgia, where Russian troops remain in two disputed enclaves in violation of a 2008 cease-fire.

Amid the heightened tensions over Ukraine, the United States this week twice renewed its objections to the Russian military presence in Georgia's breakaway Abkhazia and South Ossetia regions.

In a bid to shore up Ukraine's fledgling administration, the IMF has said it is "ready to respond" to Ukraine's bid for financial assistance; Ukraine's finance ministry has said it needs $35 billion over the next two years to avoid default.

The European Union is also considering emergency loans for a country that is the chief conduit of Russian natural gas to western Europe.

And Putin asked his government to "hold consultations with foreign partners including the IMF and the G8 nations to provide financial aid to Ukraine."