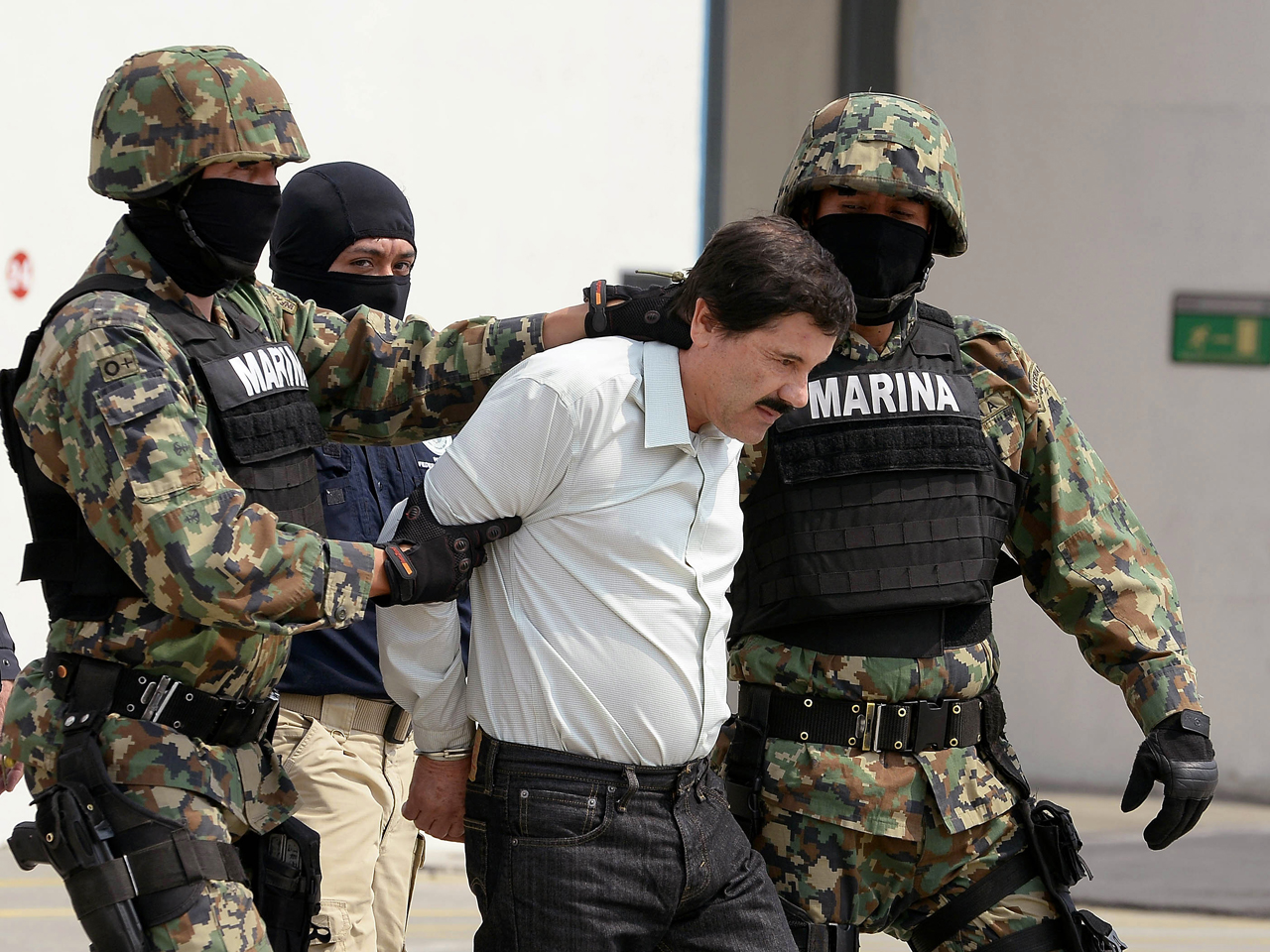 MAZATLAN, Mexico - For 13 years Joaquin "El Chapo" Guzman watched from the rugged mountains of western Mexico as authorities captured or killed the leaders of every group that challenged his Sinaloa cartel's spot at the top of global drug trafficking.

Unscathed and his legend growing, the stocky son of a peasant farmer grabbed a slot on the Forbes' billionaires' list and a folkloric status as the capo who grew too powerful to catch. Then, late last year, authorities started closing on the inner circle of the world's most-wanted drug lord.

The son of one of his two top henchmen, Ismael "Mayo" Zambada, was arrested at a border crossing in Nogales, Arizona in November as part of a sprawling, complex investigation involving as many as 100 wiretaps, according to his lawyer.

A month later, one of the Sinaloa cartel's main lieutenants was gunned down by Mexican helicopter gunships in a resort town a few hours drive to the east. Less than two weeks passed before police at Schipol Airport in Amsterdam arrested one of the cartel's top assassins, a man who handled transport and logistics for Guzman.

But the target was bigger.

On Feb. 13, a man known as "19," whom officials called the new chief of assassins for Zambada, was arrested with two other men on the highway to the coastal resort city of Mazatlan. Four days later, a man described as a member of the Sinaloa cartel's upper ranks was seized along with 4,000 hollowed-out cucumbers and bananas stuffed with cocaine. In the middle of this week, a 43-year-old known by the nickname "20" and described as Zambada's chief of security, was arrested transporting more cocaine-stuffed produce.

By the middle of the week at least 10 Sinaloa henchmen had been seized.

A U.S. law enforcement official said Saturday that at least some were actually security for Guzman, and authorities used them to obtain information that helped lead to the head of the cartel. The official was not authorized to talk to journalists and spoke on condition of anonymity.

Agents learned that Guzman, 56, had started coming down from his isolated mountain hideouts to enjoy the comforts of Culiacan and Mazatlan, said Michael S. Vigil, a former senior DEA official who was briefed on the operation.

"That was a fatal error," Vigil said.

Working on the information gleaned from Guzman's bodyguards, Mexican marines swarmed the house of Guzman's ex-wife but struggled to batter down the steel-reinforced door, according to Mexican authorities and former U.S. law-enforcement officials briefed on the operation.

As the marines forced their way in, Guzman fled through a secret door beneath a bathtub down a corrugated steel ladder into a network of tunnels and sewer canals that connect to six other houses in Culiacan, the officials said.

Guzman fled south to Mazatlan. On his heels, a team of U.S. Drug Enforcement Administration agents set up a base of operations with Mexican marines in the city, according to the current U.S. law-enforcement official.

Early Saturday morning, Guzman's reign came to an end without a shot fired. Marines closed the beachside road in front of the Miramar condominiums, a 10-story, pearl-colored building with white balconies overlooking the Pacific and a small pool in front.

Smashing down the door of an austerely decorated fourth-floor condo, they seized the country's most-wanted man at 6:40 a.m., a few minutes after the sun rose.

A neighbor who declined to identify himself for fear of retaliation said the apartment had only been occupied for two days. An employee of the building's cleaning staff said that clothes were strewn across the floor and bed in the condo, and humble domestic appliances - a microwave, a floor fan, a flat-screen TV on a small table - were left inside.

Photos of the apartment published by a local newspaper showed cheap and unglamorous furnishings. Inside the condo, the photos showed little food or liquor: just a couple of dozen eggs on a shelf. A bag from a low-end supermarket lay on the floor.

Guzman was caught with an unidentified woman, said one official not authorized to be quoted by name, who added that the DEA and Marshals Service were "heavily involved" in the capture. Mexican officials said, however, that Guzman was detained along with a man they identified as Carlos Manuel Hoo Ramirez.

“BOARD OF DIRECTORS” REMAINS

Mexico's government scored a huge victory with the capture of Guzman, but there are dears it could unleash a fresh wave of violence as they fight for control of his turf in a drug war that’s claimed at least 60,000 lives so far.

Experts say his Sinaloa Cartel should have no trouble in continuing without him.

"Chapo was the strategy guy, he was the CEO, but he still has his board of directors who are running things," said drug war expert and retired U.S. Air Force captain Sylvia Longmire.

"Day-to-day on the ground, I don't think there is even going to be a hiccup in the drug flow," she added.

Nevertheless, Guzman's imprisonment could encourage rivals to try to muscle in on the turf his business empire has held for years from its base in northwestern Mexico.

For now it is a personal triumph for President Enrique Pena Nieto, who took office in December 2012 pledging to cut spiraling violence in Latin America's second biggest economy.

Doubts about his strategy on organized crime have grown as the violence continued and his government made a risky alliance with vigilante groups in a confrontation with a drug gang in the state of Michoacan.

The arrest of Guzman offers a strong riposte to the president's critics.

Pena Nieto's predecessor Felipe Calderon staked his reputation on bringing the gangs to heel, but despite capturing or killing many capos, violence leapt during his six year term.

No-one was a more telling reminder of the Calderon government's shortcomings than Guzman. After escaping from prison in 2001, the drug lord built up an empire and made his way onto the Forbes list of billionaires.

Pena Nieto has taken a more low key approach to fighting organized crime than Calderon, and the cross-border intelligence operation that led to Guzman's capture is a boost for Mexican-U.S. cooperation on organized crime.

Initially focusing on the Zetas, a brutal cartel that has been behind many of the most shocking atrocities of the last few years, Pena Nieto's government put the group on the back foot by capturing the gang's boss Miguel Angel Trevino last July.

Murders fell by more than 16 percent during his first full year in the job, but he had hoped for a greater decline and serious problems remain.

Homicides are still well above the levels recorded when Calderon took power, and extortion and kidnapping rose last year, according to government figures.

The removal of Guzman from the scene does not mean there is any less for the cartels to play for.

Trafficking remains a highly lucrative business: according to U.S. State Department figures, the gangs send between $19-29 billion each year from the United States to Mexico.

In spite of steps to decriminalize marijuana usage in parts of the United States, the drug is still smuggled in vast quantities, and the market for harder narcotics is thriving.

Between 2008 and 2012, the amount of heroin seized at the U.S. southwest border increased by 232 percent, according to National Seizure System (NSS) data. And though cocaine seizures are down, that has been offset by higher consumption in Mexico and Europe, said Alberto Islas of consultancy Risk Evaluation.

Such is the size of the illicit drugs market, that by the time of his fall, Guzman was probably overseeing an empire with as many as 150,000 people in its employ, said Malcolm Beith, author of "The Last Narco", a biography of the kingpin.

The fallout will likely be violent, he said.

"Whenever the leadership of a drug cartel is compromised, there are turf wars at lower levels," Beith told Reuters.

"We've seen increased violence already in recent months in Sinaloa since the capture or death of several high-ranking lieutenants, I expect more to follow."

Blows against capos have sparked conflagration in the past. Killings surged in the border city of Tijuana during a lengthy battle for control of the local cartel following the capture of kingpin Francisco Arellano Felix in 2006.

Guzman's lieutenant Ismael Zambada could now take over but he is over 65 and younger rivals may seek to exploit the sudden opening.

In the meantime, the government must press home the attack on the Sinaloa Cartel, said Michael Braun, managing partner of security consultancy SGI Global who was formerly a top official at the U.S. Drug Enforcement Administration (DEA).

"Now is the time to throw every available asset and resource, Mexican and U.S., at the cartel and relentlessly strike at every aspect of the organization," Braun told Reuters.

But Mexico's efforts to stamp out organized crime will fail if the government does not do more to tackle the corruption that has sustained Guzman and his ilk for years, said Edgardo Buscaglia, a crime expert at Columbia University.

"The politicians who protected El Chapo aren't being arrested, nor are the businessmen who worked with him," he said. "Without that, the arrests end up being inconsequential for dismantling the organization."