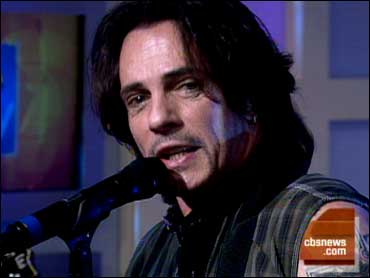 Australian-American singer/songwriter Rick Springfield knows what it takes to makes an American classic.

Springfield rocked the '80s with his unforgettable hit song "Jessie's Girl," a catchy tune that was relatable to many who have experienced heartache.

The Grammy Award-winning song made him an '80s pop-rock icon and also paved the way for the music video era.

More than twenty-five years later, he's still trying to solve the mystery of love with the song "What's Victoria's Secret?" from his new album "Venus in Overdrive."

Springfield stopped by The Early Show to perform "What's Victoria's Secret?" and "Jessie's Girl" as well as talk about the new album.

"Venus in Overdrive" came easily to Springfield, almost as if he never left the stage.

"We wrote it actually in six months but recorded the whole album in 32 days, which is a miracle for me," Springfield said. "We were just ready. The songs were rehearsed. The songs were great. I wrote them with my writing partner, Matt. It was the first time I have co-written. It went smoothly.

Springfield observed that "What's Victoria's Secret?" was "a title that was waiting to be written. We came up with it first, I think."

Although it's easy to assume that Springfield wrote the song about the sexy clothing line or the models that don the lingerie, but that's not the case.

"It's a relationship song. It's not about the clothing line," Springfield admitted.

After his whirlwind of success in the '80s, Springfield took some time off to spend with his wife and two children while still taking on TV roles and musical theater. After a break from recording, he returned in 1999 with "Karma," the critically acclaimed 2004 follow-up "Shock/Denial/Anger/Acceptance" and a 2005 album of cover tunes "The Day After Yesterday."

The years have been good to Springfield, who looks just as handsome and youthful as he did 25 years ago. He says his own secret is eating right and working out.

Although he is taking on new endeavors, Springfield will be forever attached to "Jessie's Girl," whether he hears it on the radio or is performing it himself.

"It's like a family member now," Springfield said. "It's been part of my life for so long."

It turns out that Jessie's girl was a real person after all. But, in the end he never did get her.

"I got a pretty good song out of it," he said. "It was worth the frustration."
By Melissa Castellanos