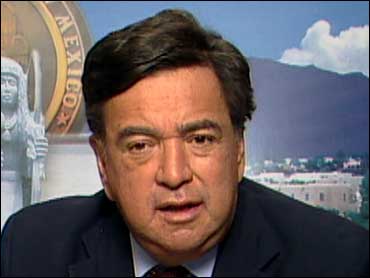 With the Iowa caucuses just eight days away, polls among Democrats continue to show a tight, three-way race between Hillary Clinton, Barack Obama and John Edwards.

But that isn't discouraging New Mexico Governor Bill Richardson, who told CBS News' The Early Show how he plans to break out of the pack.

"Iowans traditionally make up their minds the last five days," Richardson told Early Show co-anchor Russ Mitchell. "It's very volatile. There is about a 40 percent undecided vote. My message is getting through. I can sense the momentum in the crowds."

"It's all literally door-to-door, town meeting, voter-to-voter, because this is a caucus system," he said. "This is not a straight vote. You have to, for instance, get 15 percent of those attending a precinct meeting. It's actually quite complicated. But it's quite a great standard for democracy. So, I feel very good."

"I feel like some of the other candidates that have come in the past and done very well at the very end," he added.

Polls have consistently shown Richardson in fourth place in Iowa, but he is undeterred. He has been pushing to make it into the top three, and denied in the interview that a fourth place finish in Iowa would stop his campaign.

"It slows it down a little bit," Richardson said. "But I'm continuing on to New Hampshire. I feel I need to be in the top three there. Nevada, a western state, which should be good for me -- top three. And then we head into the February 5th primaries, which contains California, Arizona, Colorado, New Mexico, Oklahoma -- states where is I will do well."

"I feel that I can end up in the top three. That's my objective. I am working harder than anybody. And I feel very good," he added.

When asked, Richardson also denied that he would accept a vice presidential spot on a ticket.

"I'll say I have the best job in the world, governor of New Mexico," he said. "I've got three years to go. I love doing what I'm doing."

Richardson also tried to make the case for his candidacy to voters.

"Because I have the most foreign policy experience. I've been a governor, a CEO. I can bring this country together. I have legislative experience, 14 years in Congress. I've been in the cabinet. But mainly because on the main issues affecting the country -- ending the war, bringing the troops home, becoming energy independent, a universal
health care plan -- I know how to do it."

"Plus I have consistent positions, and Senator Clinton, for instance, is flip-flopping on Iraq so many times I can't keep up with her."

In the interview, Richardson also stressed that he was running a positive campaign and would stay positive throughout the final run even if the other candidates did not.