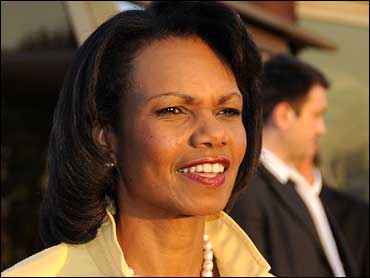 Secretary of State Condoleezza Rice warned Iran on Thursday that the United States will not back down in the face of threats against Israel.

Iran answered with another missile launch.

Iranian state television portrayed the missiles, fired Wednesday and again overnight, as a demonstration of the country's ability to defend itself against an attack by Israel or the United States. The weapons included missiles launched from naval ships in the Persian Gulf, along with torpedoes and surface-to-surface missiles, the broadcast said.

The Iranians said they launched nine missiles but U.S. intelligence counted seven, reports CBS News national security correspondent David Martin Then several hours later another missile was fired - the one that apparently failed to launch on the first try. One of those missiles was said to be capable of hitting Israel. U.S. intelligence says the missile flew about 600 miles, well short of what it would take to reach Israel.

"These Iranian tests seldom show their great military prowess and often if analyzed very closely suggest that their programs are still very much in an evolutionary state and in fact that their capabilities are not exactly as advertised," Iran expert Suzanne Maloney told Martin.

The same may be true of Iran's nuclear program. The Iranians like to show off the centrifuges they've built to enrich uranium. But U.S. intelligence says Iran's uranium enrichment has been beset with technical difficulties, adds Martin.

Just hours earlier on Thursday, Rice had closed her three-day European trip with a stern response to Iran: "We are sending a message to Iran that we will defend American interests and the interests of our allies."

Rice noted U.S. efforts to increase its own security presence in the Persian Gulf and the defense capabilities of U.S. allies there.

"We take very, very strongly our obligations to help our allies defend themselves and no one should be confused about that," she said.

Rice tied the first round of Iranian missile tests to U.S. plans for a future missile shield, which would theoretically protect Eastern Europe from missiles launched from Iran.

The system would place radar interceptors in the Czech Republic, a former Soviet satellite, and missiles in Poland. That has drawn protests from Russia, which says that's uncomfortably close.

Such a missile defense system "will make it more difficult for Iran to threaten and be bellicose and say terrible things, because their missiles won't work," Rice said.

(AP Photo/Sepah News)
Meanwhile, the New York Times reported that after Iran's initial missile test, a digitally-altered image of four missiles heading skyward in unison appeared on the front pages of several major newspapers and news Web sites. Thursday, The Associated Press distributed a nearly identical photo (at left) from the same source, but without the fourth missile.

Rice's trip to Eastern Europe highlighted the troubled U.S. relationship with Russia. Rice's visit began with a celebration of U.S plans to base anti-missile defenses in countries once under the Soviet hand, and a warning from Russia that it may respond with unspecified military action. It ended with a public display of close U.S. ties to Georgian President Mikhail Saakashvili, a Russian nemesis.

Georgia's relations with Russia have deteriorated since Saakashvili came to power in 2004. Saakashvili is pushing for Georgia's integration into the West and its NATO military alliance; Moscow sees Georgia as part of its sphere of influence.

Appearing at a news conference with Rice, Saakashvili thanked the U.S. for its support of Georgia's territorial integrity and criticized Russia for conducting what he called a "post-Cold War land grab." He joked about an incident earlier this week in which Russian planes allegedly flew near the Georgian capital.

"It looks like some people have not noticed that the Cold War is over," he said.

Rice said Russia had a responsibility to restore stability in Georgia and that Russia should "behave in that way - resolving and solving the problem and not contributing to it."

Rice had all but dared Moscow to critique her visit to this former Soviet republic locked in a shoving match with Russia that has seen Russia close its border with Georgia and impose trade and other restrictions.

Georgia has long accused Russia of aiming to annex Abkhazia and another separatist Georgian region, South Ossetia. Both have been outside the Georgian government's control since the end of separatist wars in the mid-1990s.

Russia does not formally recognize either region's separatist government, but it maintains close contacts with them and has granted passports to most of the regions' residents. Russia has peacekeeping forces in both regions; Georgia accuses the Russian forces of supporting the separatists.

"It is very important that all parties reject violence as an option. There must be a peaceful resolution and that's what we'll work for," Rice said, speaking with Saakashvili.

Georgia has said it suspects Russia of using peacekeeping troops as a cover to bring artillery and other heavy weapons into Abkhazia. U.S. officials say Georgia is not blameless, but that Russia has helped make the situation truly dangerous.