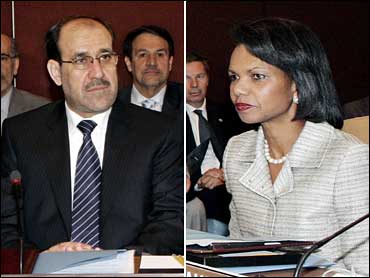 Rice and Prime Minister Nouri al-Maliki were among numerous top diplomats and officials from Iraq's neighbors, including Iran and Syria, which the United States accuses of destabilizing Iraq, gathering at the United Nations with U.N. chief Ban Ki-moon to discuss Iraq's future.

Neither spoke to reporters as they entered the room for the meeting, which came as a senior Iraqi official in Baghdad said Iraqi investigators have a videotape that shows employees of Blackwater USA opening fire against civilians without provocation on Sept. 16.

At the same time, Iraq's Interior Ministry said it had expanded its investigation of the shooting to include six other incidents involving Blackwater guards over the past seven months.

The developments added to rising U.S.-Iraqi tensions, which shot up following last Sunday's shooting that killed at least 11 Iraqis, including civilians.

Despite that, al-Maliki said before the session that he believed security was improving in Iraq and urged the United Nations to boost its presence in his country.

"The security situation ... has begun to develop tremendously, and the Baghdad of today is different from the Baghdad of yesterday," he said after a solo meeting with Ban.

The Rice-al-Maliki talks here, held as part of a wider meeting on Iraqi economic and political goals, are the highest-level encounter between the governments since the incident and since Rice on Friday announced a full review of State Department security in Iraq.

They precede a meeting between al-Maliki and President George W. Bush next week on the sidelines of the annual U.N. General Assembly.

The security review that Rice announced will examine the rules of engagement followed by security contractors as well as rules and regulations that govern their operations. That includes the jurisdiction in which contractors should be covered and the immunity from prosecution by Iraqi and U.S. military courts that they now enjoy.

A joint U.S.-Iraqi commission is also beginning to look at widely conflicting accounts of last weekend's incident; the first session was planned for Sunday.

American witnesses have said the security guards were responding to an attack. Many Iraqi witnesses have told investigators the shooting was unprovoked. The prime minister has called the incident a "crime" and his government has suggested that the U.S. no longer use Blackwater for security.

But the State Department relies heavily on private contractors to protect U.S. diplomats and other civilian U.S. government personnel in Iraq because it lacks the means to do so itself.

Blackwater has said its guards, protecting a U.S. diplomatic convoy, were returning fire from insurgents and acted appropriately.

Rice spoke to al-Maliki by telephone Monday to express regret for the deaths. At that time, she asked that he hold off from any action against Blackwater until all the facts were known.

Iraqi officials, who initially said they would ban the company, have shown no sign of easing their criticism. The killings have outraged many Iraqis, who long have resented the presence of armed Western security contractors, considering them an arrogant mercenary force that abuses Iraqis in their own country.

Maj. Gen. Abdul-Karim Khalaf said the Moyock, North Carolina-based company has been implicated in six other incidents over the past seven months, including a Feb. 7 shooting outside Iraqi state television in Baghdad in which three building guards were fatally shot.