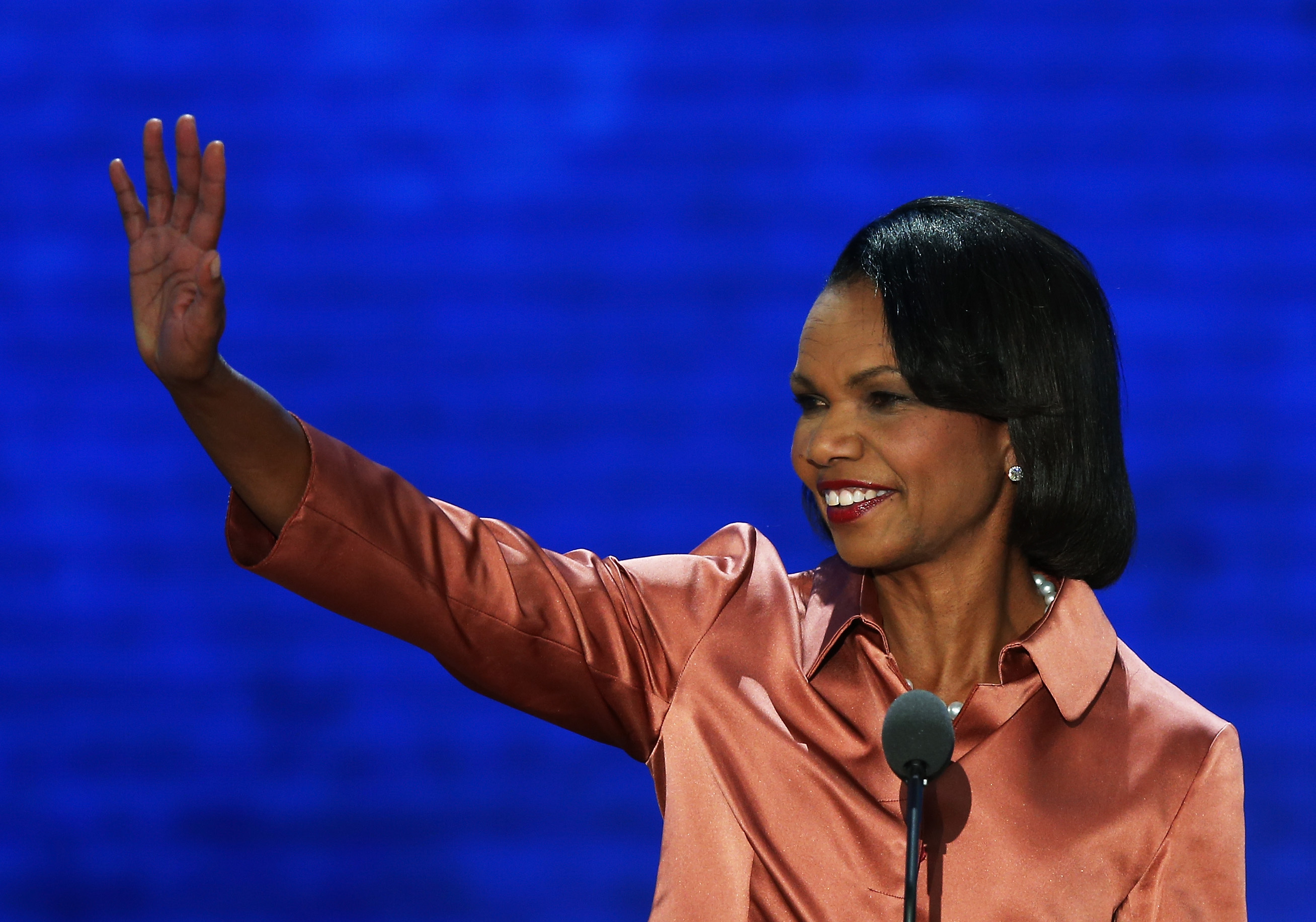 (CBS News) TAMPA, Fla. - Former Secretary of State Condoleezza Rice suggested in her speech at the Republican convention Wednesday that the United States has lost its standing in the world and that Mitt Romney and Paul Ryan can restore American leadership, calling the election one "of consequence."

"Where does America stand? When our friends and our foes, alike, do not know the answer to that question - clearly and unambiguously -- the world is a chaotic and dangerous place," Rice said, saying the U.S. has skirted its role dealing threats of Iran and war-torn Syria.

But Rice, who approached the stage to raucous applause, said foreign policy is not the only area the U.S. is "reluctant to lead." In a wide-ranging speech that expanded beyond her foreign policy expertise, Rice said energy, trade, immigration and education are crucial to ensuring American leadership.

(Watch the full speech at left)
"Mitt Romney and Paul Ryan understand this reality -- that our leadership abroad and our well being at home are inextricably linked. They know what needs to be done," she said.

Education is "the civil rights struggle of our day," she said. It's an issue she has focused on in recent years, even releasing a bipartisan report on the risks of a failing education system with the former head of New York City schools Joel Klein earlier this year. "The crisis in K-12 education is a grave threat to who we are."

"We need to give parents greater choice - particularly poor parents whose kids - most often minorities -- are trapped in failing neighborhood schools," Rice said. "To do anything less is to endanger our global economic competitiveness. To do anything less is to tear apart the fabric of who we are and cement a turn toward grievance and entitlement."

Additional convention speeches:
Rand Paul: Obama is "uniquely unqualified" to lead
Ann Romney: "You can trust Mitt"Paul Ryan: "We will not duck the tough issues"

Rice's remarks were based on her highly-praised speech she delivered to an exclusive group of Romney supporters and donors in Utah earlier this year, according to a senior Romney campaign aide. Rice, who was mentioned as a long-shot potential VP choice for Romney, reemerged on the political scene in the past year after working in academia and writing following her stint in President George W. Bush's administration.

Without mentioning President Obama's name, she noted the gravity of this selection.

"This is a moment - an election - of consequence. Because it just has to be that the most compassionate and freest country on the face of the earth will continue to be the most powerful."

Rice argued that Romney and Ryan's leadership would lead the country back to greatness.

"Mitt Romney and Paul Ryan will rebuild us at home and inspire us to lead abroad," she said.

"They will provide an answer to the question, 'Where does America stand?'"