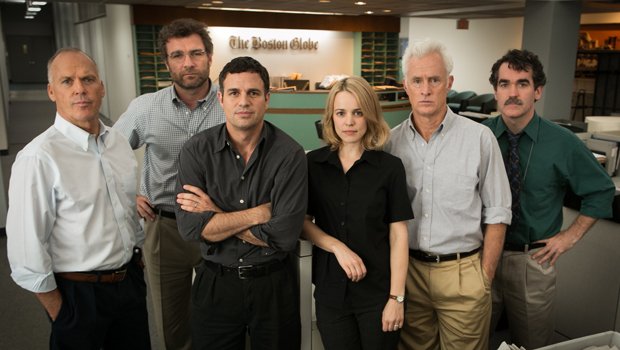 During the last Republican primary debate, candidates made noise about the media being out to "get" them, and the audience went "Yeah!!!" -- as if posing tough questions to powerful people seeking even more power isn't what journalists are supposed to do.

How about a refresher?

The new movie "Spotlight" makes a better case for probing journalism than anything since "All the President's Men."

It's a true story. The title comes from the Boston Globe's Spotlight team, a handful of reporters who spend months, even years, on single stories (how rare is that?).

It's the late 2000s, and a picture emerges in dribs and drabs of a vast number of priests sexually assaulting children and the crimes being hushed up.

At first, the story looks like more trouble than it's worth. The team is all Catholic, and who wants to offend relatives, buddies, neighbors, one's priest -- not to mention half the Globe's subscribers?

It takes an outsider to light the fire -- the new editor, who tells Spotlight not to target individuals but the institution ... the system.

Church higher-ups keep pointing out he's Jewish and has "an agenda." But that agenda isn't anti-Catholic; it's anti-tribalism, anti-secrecy. Most victims were lonely Catholic kids from poor, tough neighborhoods, who could be pressured into silence.

There's no blood or nudity in "Spotlight." The monsters are largely off-screen, and many scenes turn on reporters poring over files, or attempting to convince guarded people to let their guard down.

But this low-key, step-by-step procedural drama becomes more horrifying than any horror movie. The offenses smell to heaven.

Director Tom McCarthy has assembled an amazing ensemble, top to bottom, including Mark Ruffalo, Rachel McAdams and Brian D'Arcy James as reporters; Liev Schreiber as the reticent but firm editor; Stanley Tucci as a cranky Armenian plaintiffs' lawyer; and Billy Crudup as the smoothie litigator who makes devil's bargains with the Church.

Two actors stand out. John Slattery plays an editor split in two: He'd like this story to go away, but he can't NOT go forward. Michael Keaton is riveting as the Spotlight leader, a man also sits in judgment on himself.

One scene is especially useful: Len Cariou's Cardinal Law tells the Globe's editor the newspaper and the Church, two great institutions, should work together. The editor says a great paper stands alone.

The fact is, if journalists aren't adversarial, what the hell are they?

To watch a trailer of "Spotlight" click on the player below.