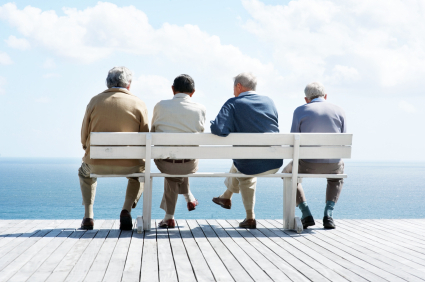 (MoneyWatch) A reader recently challenged me on my post about how my 91-year-old mother has recession-proofed her retirement:

Just one problem -- most people retiring don't have enough from ALL of their resources to meet their basic income needs. Your mom, you may not realize, is in the "1 percent" of retirees that have a pot of resources that cover basic needs and another pot with which she can let the market do as it may. I'd like to see another post where you deal with the advice that fits most retirees: They have Social Security, a home, and maybe if very lucky $200,000 in financial assets. Go for it.

While I can assure you that my mom isn't a 1 percenter, this reader makes a good point -- my mom is probably in the top 10 to 20 percent of retirees when it comes to having a pension and some retirement savings. My father was a career professor at the University of Southern California, and my mother was a stay-at-home mom for most of her children's lives, so our family's wealth and income was far, far below that of the 1 percent.

Rather, my mother and father secured their retirement by purposely keeping their living expenses low, saving diligently, and paying off their mortgage before they retired. My father also received a good pension from USC, and both my mother and father received modest inheritances from their parents that helped supplement their own resources. Their situation was certainly attainable for the middle class of their generation, although it's much less common among the generation that's retiring today.

How to recession-proof your retirement
Retiring baby boomers: Dropping out to make every dollar count?
How to retire with no retirement savings: the "Golden Girls" solution

So let's take on the challenge posed by my reader. I'll start by acknowledging that the ideas expressed in this post are far from ideal and may not fit many people's image of their "golden years." This reflects the reality for most of today's retirees -- they just don't have the financial resources necessary for a traditional retirement, especially with the Great Recession delivering a serious blow to their finances. Still, you've got to do something to survive, so here's the plan.

Now let's look at the income that could be generated by the $200,000 in retirement savings mentioned by the reader. One of the best ways to maximize a guaranteed source of lifetime retirement income is to purchase an immediate annuity. With that in mind, I'll suggest an annuity that increases at a fixed rate of 3 percent per year to address potential inflation. According to the website of Hueler's Income Solutions, which is offered through Vanguard's Annuity Access Program, a couple who  are both age 70 could use their $200,000 to buy a 100-percent joint-and-survivor annuity that increases 3 percent per year and expect to receive about $767 per month in retirement income.

Adding up their Social Security benefits and annuity income would give them a total monthly income of $2,610, or $31,320 per year. This modest income is recession-proof -- it won't drop due to market meltdowns, and it's indexed for inflation. I suggest that this couple not tap into their home equity until they're really desperate, either when they're no longer physically able to work or to pay for potential long-term care expenses.

Let's see how this income compares to median annual incomes reported in the Fed's survey of consumer finances. The median amount of annual income in 2010 is $42,700 for families headed by a person age 65 to 74 and $29,100 for households headed by someone age 75 and over. One important reason for the large difference between these two age groups is that the 65-to-74 age group includes many households where one or more people still work, while the age 75 and over household is probably fully retired. So the example in this post isn't too far off the typical American household that is fully retired.

From the monthly income of the couple in this example, we'll subtract about $200 per month for Medicare premiums for a couple, which leaves a net income of $2,410 per month to cover all expenses for housing, food, utilities, insurance, entertainment, and so on.

There's no doubt it require some resourcefulness and creativity on the part of most people to make ends meet on that budget; there's no magic bullet that will bail them out. If they need additional income, their choices are limited to working for supplemental income or learning to live within their modest means. They could also rent out a room or two for additional income.

Perhaps the best way to live on reduced income is to share living quarters, either with other retirees who are in the same boat or to move in with your kids. While this may not be desirable for 21st century Americans, it's the way the vast majority of humanity has lived for thousands of years, and it's the way most Americans lived until a few generations ago.

Actually, it's the same with continuing to work until just before you die -- that's the way most of humanity has lived until recently; many around the world still live this way.

Another possibility is for this couple to move to a very low-cost area, either in another country or in a cheaper part of the U.S. This would require renting out their house or selling it -- while that may not be the easiest choice, these are both definite possibilities to help them live within their means.

My mother-in-law, who recently died at age 94, puts a real-life face to the situation outlined in this post. After her husband passed away 20 years ago, all she had was Social Security income, some home equity, and a daughter (my wife) who helped her make ends meet. She did what she could to manage her living expenses -- her mortgage payment was very low, and she didn't own a car. She could walk to the market, senior citizen's center, church, bank, post office, and the center of her home town. Friends and family gave her rides when she needed to travel farther. She only tapped the equity in her home in the last few years of her life when she needed long-term care. While her life wasn't easy financially, she managed to survive and enjoyed her life until nearly the end by keeping in touch with family and friends.

Due to the modest financial resources available to most retirees the financial solutions for the couple I described in this post are fairly limited. Because of that, their retirement planning will need to morph into career planning, expense management, and nurturing relationships with family or friends.

I don't mean to romanticize this outcome or try to put lipstick on a pig -- this situation will be challenging for most people. It is, however, the reality that many people face, so they'll need to do the best they can to survive. Given the statistics from the Fed survey cited above, this couple will have a lot of company.

I believe that it's possible to find joy and fulfillment in life with modest resources. Anyone who has traveled to developing nations has seen for himself that it's possible for older people to live well if they maintain rich relationships with family and friends. Nevertheless, it's a sad state of affairs when we're comparing ourselves to these considerably poorer nations.

Stay tuned for my next post, which takes on this challenge for people currently in their 60s who haven't yet retired.