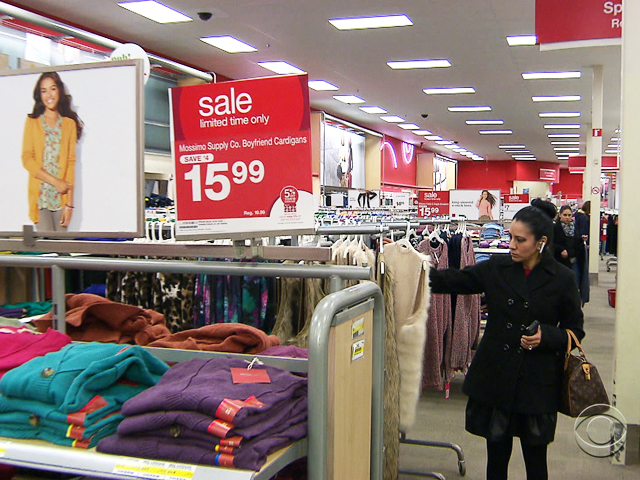 NEW YORK -- Retail shopping was up 2.3 percent this holiday season, according to initial numbers from MasterCard SpendingPulse -- lower than the 3.9 percent increase in holiday shopping the National Retail Federation had projected. If this first snapshot holds, it would be the first time holiday shopping grew less than 3 percent since 2010.

Deep discounts and extended hours could not get Americans to spend as much as stores expected this holiday season, so now retailers are cutting prices even more. Even along Chicago's exclusive Michigan Avenue, stores were offering 75 percent off Thursday.

"Retailers overshot the mark, in terms of apparel supply," said retail analyst Craig Johnson. "So there's an imbalance of supply and demand in apparel, leading to all the dramatic promotions you're seeing today."

Stores could not make up for storms which hit during two key shopping weekends -- and the lackluster economy.

Now the race is on for stores to clear inventory. Thursday was expected to be the fifth busiest shopping day of the year. A wild card is the projected $29 billion spent on gift cards over Christmas. The value of the cards is not recorded until they are redeemed.

"The traffic is a little bit down, in terms of previous years," says Richard Ortiz, who manages a Banana Republic store in Manhattan. "I think we're seeing a lot more online shopping."

Web sales were up more than 10 percent over last year, and more people did their holiday shopping on smart phones. Visits from mobile devices made up a record 48 percent of all online traffic.

Several stores, like Macy's, opened at 6:00 a.m. Thursday morning. Analysts expect the week between Christmas and New Year's to be the second or third biggest shopping week of the year.