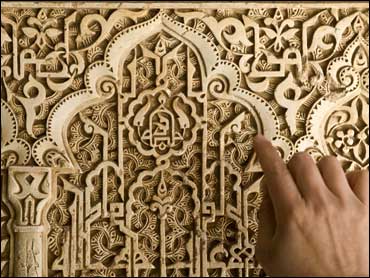 From its every nook and cranny, the Alhambra quietly speaks. Walls, columns, fountains and other pieces of Europe's crown jewel of Muslim architecture boast ornate Arabic inscriptions that even native speakers might struggle to decipher.

This month, Spanish researchers unveiled the first fruit of a gargantuan project to translate and catalog every last carving - an estimated 10,000 - from individual words to poems to verses from the Quran. The goal is to render a seemingly impenetrable slice of medieval history readily accessible with the click of a mouse.

"It is hard to believe that this had never been done before," lead researcher Juan Castilla told The Associated Press.

The dream of understanding and recording the inscriptions at the Moorish citadel goes back to King Ferdinand and Queen Isabella. Their forces captured Granada in 1492, expelled the sultans who lived in scented splendor at the 14th-century palace complex and ended nearly 800 years of Muslim rule in much of Spain.

The Spanish royal court quickly hired translators to tackle the inscriptions at the Alhambra and on other buildings throughout this handsome, whitewashed city in southern Spain. But records of that effort were lost over time, and later ones addressed only certain categories of inscription, a far cry from the exhaustive study that Castilla and two other Arabic language specialists have been conducting since 2002.

Today some inscriptions are illegible because of routine decay. And if a natural disaster like an earthquake were to strike Spain's single most visited tourist site, with 2.2 million people a year, the losses would be unfathomable, Castilla said.

"We needed to be able to say, as of the 21st century, this is what was here and this is what it said," Castilla said.

During a three-hour tour of the Alhambra, he pointed out inscriptions in every conceivable corner of the complex, running from floor to ceiling and back down again, on or atop columns, or around the rims of fountains. Some carvings are so intricate that to an untrained eye they look like elaborate drawings.

For now, about a third of the inscriptions are available on an interactive CD that provides Spanish-language translations and a wealth of other information, such as their source. Once the project is completed in 2011, the idea is to download a sample of the material onto the Internet.

Castilla, who works for the Spanish National Research Council and learned Arabic while living in Iraq and Egypt, said that understanding the writing is extremely hard even for the average native Arabic speaker, in part because it sometimes employs an archaic script called kufic.

Mansour al Marzouqui, a 16-year-old tourist from the United Arab Emirates, called the task tough but not impossible. "You can't get it the first time. You have to look really hard," he said. 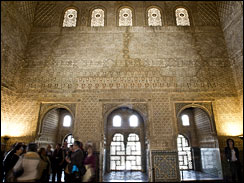 (AP Photo/Victor R. Caivano)
Through the centuries, the popular belief was that most of the writings were verses from the Quran or poetry. But on the basis of the Alhambra building that has been studied so far, the Comares Palace (left), those amount to less than 10 percent of the total, Castilla said.

In fact, the phrase repeated most often - hundreds upon hundreds of times - is a sentence considered the slogan of the Nazrid dynasty, one of the successions of rulers that passed through the Alhambra. It says: "There is no victor but God." It shows up on tiny shields, inside eight-pointed stars and myriad other places.

One of the reasons for so much inscription was that the Alhambra's sultans wanted to leave a record of their presence, Castilla said. Also, such writings are a way of professing faith in God and of simply decorating the place: Islam discourages any kind of representational art.

Other inscriptions are single words like "happiness" or "blessing" - with the idea that they are to invoke such things from God for the room where they are carved or for the ruling sultan himself.

As for the poetry, it can range from a few verses to longer pieces, like one that spans 25 yards as it runs along all four walls of a room. It was penned to celebrate the circumcision of a sultan's son.

Elsewhere, poetry runs up one side, across the top and down the other flank of a small alcove of the kind where the Moors would place a pitcher of water with rose petals as incense. This poem compares the image of a pitcher being poured with that of a Muslim leaning forward in prayer.

Castilla feels the content of all the poetry is less appealing than its presentation in such a rich variety of places throughout the Alhambra.

"As you walk along, it seems as if you are opening a book of poetry and turning the pages," he said.
By Associated Press Writer Daniel Woolls