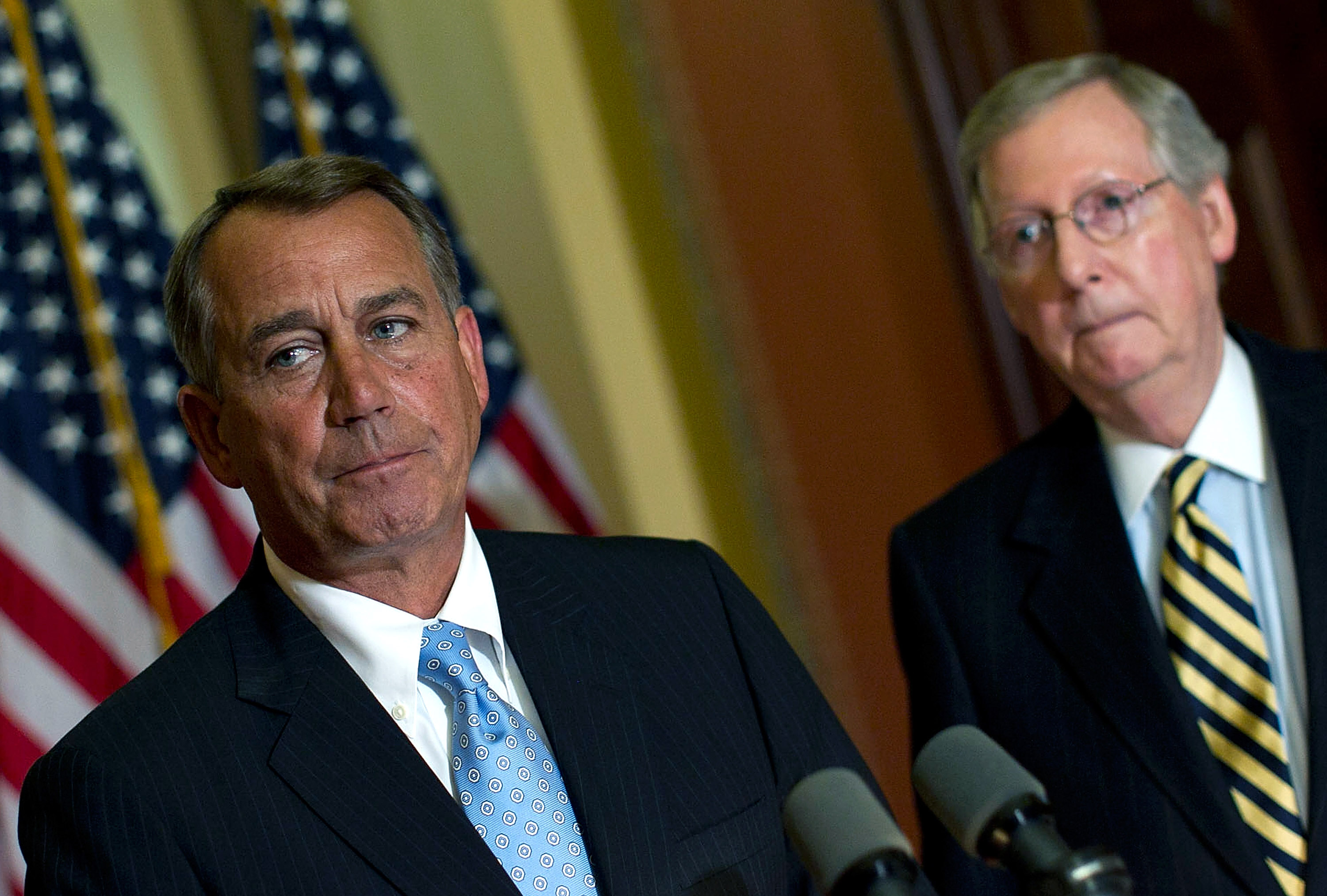 For the GOP, Christmas came early this year.

It came on Oct. 1, the day HealthCare.gov debuted to disastrous results and millions of constituents began calling to complain about canceled plans. Not only did Republicans’ predictions about the law’s viability appear to be coming true, but in a double whammy, President Obama found himself apologizing for the claim that if people liked their health insurance, they could keep it.

Their fortunes were so good that the botched rollout of the law – Mr. Obama’s signature domestic policy achievement – ended up largely overshadowing their role in prolonging a 16-day government shutdown in the first half of October in an attempt to defund Obamacare, which initially turned off voters. By late December, a CNN/ORC International poll that just two months ago showed Democrats with an 8-point lead on the generic ballot now had Republicans up, 49 percent to 44 percent.

Now, the question is: can they continue to ride the waves of improving public opinion into 2014? Republicans are resolved to try, by keeping their focus on the law.

The first step will be establishing a united front in how to deal with Obamacare. The GOP’s divisions were laid bare during the shutdown as lawmakers like Sen. Ted Cruz, R-Texas, drove the train from behind and pushed the GOP into demanding a full defunding of the law in exchange for reopening the government even though Democrats, who control two-thirds of the government, would never agree to it.

For the next month or so, the issue is moot. The House and Senate passed a two-year budget deal this year that makes another government shutdown next to impossible. And some Republicans believe taking the threat of a shutdown off the table will help them keep the focus on the fallout from Obamacare.

The effective deadline for the Republicans to craft a strategy is early February, before the U.S. borrowing authority runs out and Congress must raise the debt ceiling. Will the GOP once again seek a repeal? Or will they use that moment to seek another round of budget cuts?

“We’ll deal with the debt ceiling when we get there,” House Speaker John Boehner, R-Ohio, said on Dec. 11 before lawmakers left town.

John Feehery, a Republican strategist and former congressional aide, said the number one thing Republicans must focus on in 2014 is “making sure that the president continues to be the issue and not them.”

Part of that will entail racking up a few legislative accomplishments – appropriations bills, perhaps some sort of piecemeal immigration reform and a farm bill. Before he left town, Boehner ticked off a list of bills he said the House had passed but the Senate refused to take up, dealing with energy, education, regulation, innovation, health care, workplace flexibility, cybersecurity, and job training.

The GOP’s health care strategy – whether they seek to defund the law, to delay it, or other tweaks – has yet to be decided. “At the start of the year we’ll have a discussion with members at the retreat and other places but I think its safe to assume that efforts to help the private sector create jobs and protect the American people from the president’s health care law will continue to dominate,” said Michael Steel, a spokesman for House Speaker John Boehner, R-Ohio.

Things are a little trickier for Senate Republicans, who don’t control the upper chamber and recently saw some of their power to filibuster the president’s nominees limited by the Democratic majority. Still, they can filibuster legislation or push for smaller changes to Obamacare that might lure Democratic supporters. An aide also pointed to past use of this strategy, including repeals of the Community Living Assistance Services and Supports (CLASS) Act and the 1099 provision, a tax reporting requirement.

Feehery said Republicans should focus on delaying the law’s implementation – perhaps in exchange for lifting the debt ceiling. “That’s achievable,” he said. “The Obama administration itself is delaying bits and pieces of this thing all over the place. If they can get delay as part of the debt limit I think that would be a pretty big achievement.”

The GOP’s focus on the law will extend into the political arena as well as Republican candidates look to tie their Democratic counterparts to its sinking popularity.

"Their candidates are really struggling to find their spot on it because so many of them were on the record either supporting Obamacare or supporting something more aggressive than Obamacare,” said Daniel Scarpinato, press secretary for the National Republican Congressional Committee. “As it continues to be implemented there’s going to unfortunately be more problems with it that will make it even more unpopular and make these candidates and Democratic members who are up for reelection keep talking about it."

There will be several dozen competitive House seats this year, but Republicans have already gotten a few pleasant surprises. Best was the retirement announcement by Rep. Jim Matheson, Utah’s only Democratic representative in Congress who was nearly defeated in 2012 by Mia Love, the mayor of Saratoga Springs, who is running again in 2014. But two other Republicans recently announced their retirements as well - Reps. Frank Wolf of Virginia and Tom Latham of Iowa - and those seats could prove challenging to hold onto. Things will be more balanced for the GOP if Rep. Collin Peterson, D-Minn., heads for the exits, a direction that Republicans have been trying to push him.

In the Senate, the question remains whether the GOP will see a repeat of 2010 and 2012, when very flawed candidates like Sharron Angle and Richard Mourdock ultimately cost the party seats. Several Republican senators face primary challenges this year, including Senate Minority Leader Mitch McConnell, R-Ky., and Sen. Lindsey Graham, R-S.C., and other states with crowded primary fields like Georgia, North Carolina and Alaska could produce sharply conservative nominees that don’t appeal to moderates.

Part of dealing with that threat, Feehery said, is taking on the outside conservative groups who often fund challenges to sitting lawmakers or those who are seen as too close to the establishment.

“They’ve got to be able to stand up to the shadowy outside groups while at the same time representing the people back home,” he said. “The outside groups try to always manipulate this stuff.”