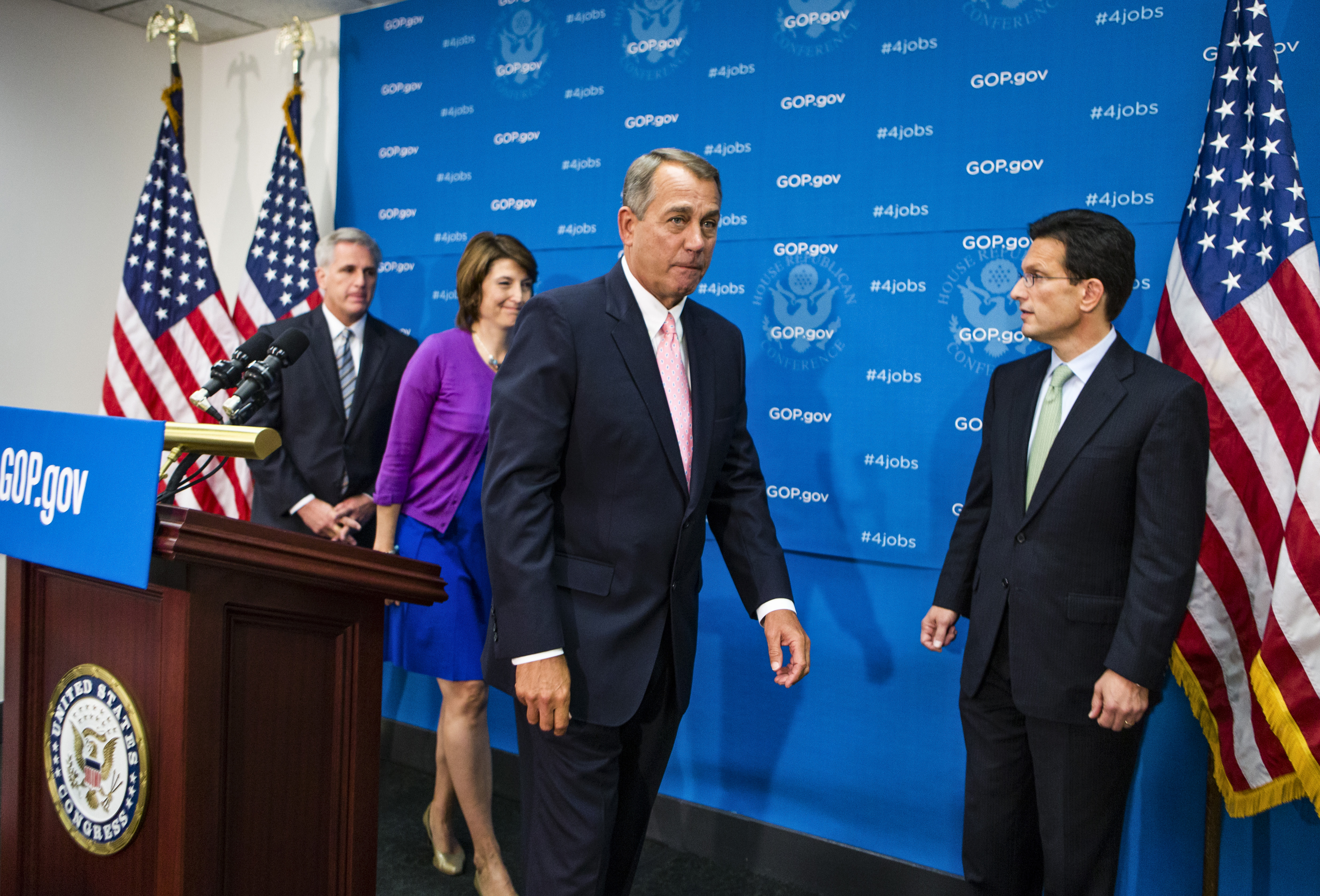 For the past week, debate over Syria has overwhelmed Capitol Hill -- even though Congress has just about two weeks left to pass a budget bill before the federal government partially shuts down.

Democratic and Republican leaders are meeting Thursday morning to discuss the looming budget issues, but before the two parties forge a path forward, the GOP may have to sort out its own issues. The Republican-led House had planned to vote this week on a bill to temporarily fund the government (referred to as a continuing resolution, or CR), but the vote was delayed Wednesday because Republicans divisions over its anti-Obamacare strategy.

"We're still discussing strategy regarding the continuing resolution with our [Republican] Conference," a House leadership aide told CBS News. "It shouldn't come as a surprise that this is moving into next week, as our bandwidths have been stretched thin this week by both the CR and the on-going situation in Syria."

Earlier this week, Rep. Hal Rogers, R-Ky., chairman of the Appropriations Committee, introduced a bill to fund the government through Dec. 15 at $986.3 billion -- just slightly below post-sequester spending levels. If this legislation or some other version of a continuing resolution doesn't pass by Sept. 30, certain government functions would shut down.

Some Republicans want to use that threat of a government shutdown as leverage to defund the Affordable Care Act (even though the impact of "defunding" the bill without completely repealing it at this point is negligible).

"We must use every legislative avenue available, through the CR, the debt ceiling, and sequester conversations to free the country from the President's train-wreck of a healthcare law," Rep. Steve Scalise, R-La., chairman of the conservative Republican Study Committee, said in a statement Wednesday.

Scalise is part of a conservative contingency that wants to pass a CR that would delay major parts of Obamacare for one year. "While we're not there yet, productive conversations towards that goal continue," he said.

Other House Republicans, however, are more concerned with preventing a government shutdown -- and shifting responsibility for taking down Obamacare to the Senate. To do that, House leaders unveiled a plan this week to vote on two measures -- a continuing resolution to keep the government funded, as well as an amendment to defund Obamacare. The plan was to pass the measure under specific rules that would let the Democratic-led Senate pass the continuing resolution and send it to President Obama without passing the Obamacare amendment -- as long as the amendment was voted on. In other words, it would purely serve to put senators on record supporting or opposing Obamacare.

"Listen, our goal here is not to shut down the government. Our goal is to cut spending and to stop Obamacare," House Speaker John Boehner, R-Ohio, said Tuesday after the plan was explained to the House GOP conference. "Listen, the House has voted 40 times to defund, repeal and change Obamacare... This strategy is intended not to -- not to really satisfy the House, we've already voted. It's enforce the vote, enforce the fight in the United States Senate. That's where the issue is, the United States Senate. Let's get the issue over there and force them to actually have a vote on getting rid of Obamacare."

House Majority Leader Eric Cantor, R-Va., added, "We will send to the Senate the provision which says, up or down, are you for defunding Obamacare or not? The House has taken a stand numerous times on its opinion of Obamacare. It's time for the Senate to stand up and tell their constituents where they stand on this atrocity of a law."

Conservatives opposed to the plan this week took to calling it "hocus pocus."

Rep. Thomas Massie, R-Ky., told CBS News that it wasn't a "serious effort" to oppose Obamacare. He said he was willing to compromise on a lot of elements in the continuing resolution, such as funding levels for the NSA, but he could not agree to fund Obamacare.

"I don't think more time's going to fix this bill," he said.

Conservative advocacy groups like the Club for Growth, the Family Research Council and the Tea Party Patriots also expressed their opposition to the plan this week. One of the most vocal Obamacare opponents in the Senate, Sen. Ted Cruz, R-Texas, dismissed it as a "procedural trick."

As the GOP attempts to settle on a strategy, the clock is ticking. While the government wouldn't shut down until October, the House is currently slated to go on recess the last week of September, giving it just six days in session to pass a continuing resolution. And soon after Congress votes on government funding, it will have to vote to raise the nation's borrowing limit or risk letting the government default on its loans.