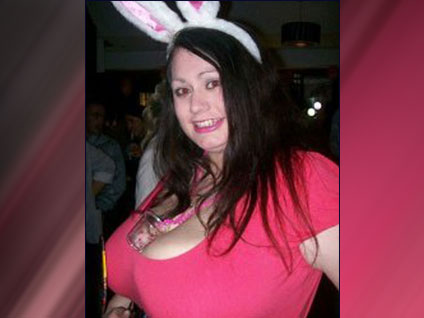 NEW YORK (CBS) Take this one with a grain of salt... uh, better make that two cups full. Claire Smedley, from Blackpool, U.K., claims her boyfriend decided to leave her after he was nearly suffocated by her gi-normous breasts while they were having sex.

That makes it a crime of passion, right?

The mother of three, who boasts 40LL breasts, told News of the World that her boyfriend, Steven, usually loves to be smothered by her love. But this time she misread his flailing for excitement, as he was really suffocating beneath her bountiful bosom.

After a few minutes, she noticed he had stopped moving and appeared to not be breathing, Smedley told the British newspaper.

She was about to call for help when a startled Steven finally came out of his trance. "I did think my time had come," Steven told News of the World.

Luckily, Steven survived...but the relationship did not.

Claire told World News that she is newly single and planning a career in modeling, to turn her giant boobs into genuine assets.

Let's hope she doesn't try to sleep her way to the top.