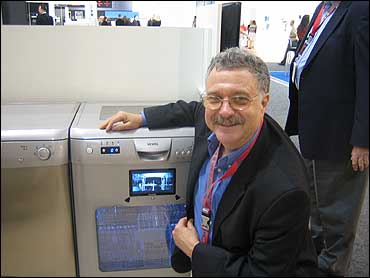 At the IFA show in Berlin the big story is "white goods" - the fact that the show, for the first time in its 84-year history, is mixing home appliances along with consumer electronics. The issue is so big here that it was trumpeted on Thursday night by none other than German Chancellor Angela Merkel who, along with the Mayor of Berlin, addressed the show's opening night "gala" dinner.

As a tech columnist I don't review refrigerators, washing machines, coffee makers and electric irons. But I have to admit I was impressed by some of the cool looking machines I saw on the show floor. The fact that many of these devices have chips, timers and other electronic components is hardly news. Most of the appliances sold in America have had electronics in them for years. What is interesting here is how electronics are being used to cut down on energy consumption. Many of the refrigerators at the Bosch exhibit, for example, had displays that report how much electricity they are using. There was also an emphasis on washing machines that save water and dryers that cut down on electricity or gas use. The company announced a new washing machine that uses 10 liters (2.6 gallons) of water. Standard U.S. full-size washers use typically use about 40 gallons per load and even so-called "Energy Star" washers use between 18 and 25 gallons according to the U.S. Department of Energy. The department has a Web page with tips on how to save water when washing clothes.

I didn't see any Internet connected appliances - I keep waiting for that coffee machine that will send me a text message when my beverage is ready. But Vestel, a Turkish company was showing a dish washer and refrigerator with a built-in TV screen. The dishwasher -- which isn't yet on the market - is a bit wacky because unless you're really short, you'd have to kneel down to view it.

Personally I can do without a TV on my refrigerator. We do have a small TV in our kitchen but I'm perfectly happy to perch it on the counter.

Another wacky product is a 3D TV from LG. The good news is that you don't have to wear those goofy 3D glasses and the other good news is that objects really do jump off the screen. The bad news is that everything is really blurry, making me wonder why anyone in their right mind would pay about $7,500 for it. To be fair, if you get in just the right position it gets clearer but if you move your eyes or head just an inch or two it goes out of focus.

Fraunhofer Institute was showing a 3D computer display aimed at gamers that uses electronic eye tracking to keep help keep you in a position to the screen remains in focus. While still a little bit blurry, it was clearer than the monitor from LG.

My favorite device was a home clothes pressing system from Monster - a German company that has nothing to do with Monster Cable. You put your coat, slacks or shift on what looks like an ironing board and steam comes from below to remove the wrinkles. At $800 Euros (about $1,200) it also has a monster price. At that price, I'll just live with wrinkles.

IFA, which is billed as Europe's largest consumer electronics show, opened on Friday and goes through Sept. 3.