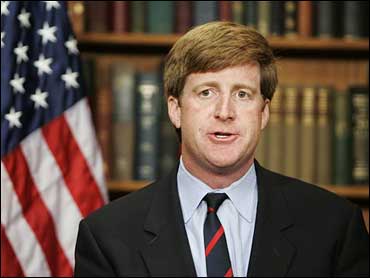 Rep. Patrick Kennedy pleaded guilty Tuesday to driving under the influence of prescription drugs and was sentenced to undergo court-ordered drug treatment and a year's probation.

Kennedy, D-R.I., also was fined at least $350 in connection with his middle-of-the-night car crash last month near the U.S. Capitol.

In exchange, two other charges against Kennedy were dismissed: Reckless driving and failure to exhibit a driving permit.

Accompanied by his lawyer, Kennedy entered his plea Tuesday afternoon before Superior Court Magistrate Judge Aida Melendez. He is the son of Sen. Edward Kennedy and a nephew of assassinated President John F. Kennedy.

"I am pleading guilty to driving under the influence," Kennedy said. Outside the courthouse in Washington, the Democrat declared, "I accepted the consequences of my actions." Kennedy says he looks forward to moving on with his life.

Kennedy returned to Congress last week after nearly a month of treatment for addiction to prescription pain drugs at the Mayo Clinic in Minnesota.

The six-term congressman, who has struggled with addiction since high school, had entered the clinic one day after the May 4 crash on Capitol Hill that he said he could not remember.

The accident has raised questions about whether Kennedy, 38, was drinking and had received special treatment by police, who did not conduct field sobriety tests. Kennedy has denied consuming alcohol before the crash.

In the hours before the crash, Kennedy said he returned home from work and took a sleeping pill, Ambien, and Phenergan, a prescription anti-nausea drug that can cause drowsiness. He said he did not consume alcohol.

Kennedy crashed his green 1997 Ford Mustang convertible into a security barrier near the Capitol about 3 a.m. The officer listed alcohol influence as a contributing factor in the crash and noted that Kennedy was "ability impaired," with red, watery eyes, slurred speech and unsteady balance, according to the accident report.

Police did not conduct field sobriety tests on Kennedy. A police union official has said the officers involved in the accident were instructed by a superior to take the congressman home. Kennedy has denied asking for special treatment.

Police had observed Kennedy's car, with no headlights on, swerve into the wrong lane and strike a curb. Kennedy nearly hit a police car, the report said, and did not respond to the officer's efforts to pull him over. He continued at a slower speed before hitting a security barrier head-on, the report said.

Kennedy told the police officer he was "headed to the Capitol to make a vote," the report said. He was cited for failure to keep in the proper lane, traveling at "unreasonable speed" and failing to "give full time and attention" to operating his vehicle.

Kennedy's office has said that it has not received those initial citations.