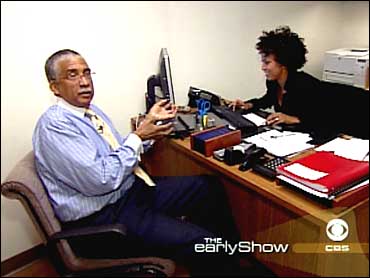 Rene Syler tried to pull off a power lunch, and her husband tried his hand at hosting a segment on The Early Show as the series "Trading Places" continued Wednesday.

The show's co-anchors are taking turns swapping jobs with their significant others.

They've been married for 12 years. Buff has been a sales exec as long as Rene has known him.

"She's in front of the camera," Buff pointed out, "and I'm very much behind the camera. Whereas she creates rating points, I sell those rating points."

Rene says she knows Buff is great at his work — but, she has to admit, she's "not quite sure what he actually does."

So, Buff explained: "My job primarily is to make sure that, from the perspective of both our sellers as well as our clients, that we're maximizing our revenue opportunities. … Broadcasting is predicated on advertising sales. … What it really comes down to is what we call "solutions-based selling" … but it's really about the people, more so than the numbers. I enjoy people."

Rene admits that "all sounds like gibberish to me. But Buff said to just be myself. So that's what I'm going to do. Be myself."

It all began with her suggesting several changes for his office.

"I'm not much of a desk type," Rene noted, "but I am a people person. Thankfully, Buff's job requires a lot of client contact, so that's ."

Rene must have done something right at the power lunch because, at the end, Alejandro agreed to buy ad time from Univision.

"See, Buff, I did not blow it!" Rene exclaimed, looking right into the camera.

Then, it was Buff's turn to try Rene's job.

As a former college football player — and having just lost 20 pounds — it was probably fitting that Buff hosted a fitness segment, with fitness guru Minna Lessig.

Lessig ,"a new type of exercise that promises results for every body type.

Buff took the reins right away, asking how that differs from traditional strength training.

"Functional training," Lessig responded, "really helps to build a strong foundation, so (your body) can better perform in everyday life movements, such as picking up children, running to catch a bus, getting in the car, all those twisting, reaching, bending motions that we do in everyday life. It really focuses in on the core, your abdominals and back, which is so key in every effort of movement."

She then showed how to do several types of functional training, and Buff gave several a go.

After the segment, Lessig said Buff lived up to his name, and Rene told him he'd done a great job but warned, "There's only room in our house for one on-air talent," to which Buff replied, "Thank God!"