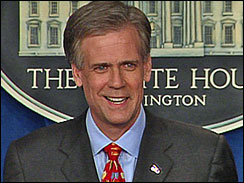 (APTN)
Tony Snow, the conservative commentator who served as President Bush's spokesperson died Sunday of cancer. He served in the White House for 17 months as press secretary.

When he resigned in September 2007, CBS News White House correspondent Mark Knoller interviewed Snow about his tenure in the White House - and his plans for the future. In his memory, we thought we'd re-post the interview.