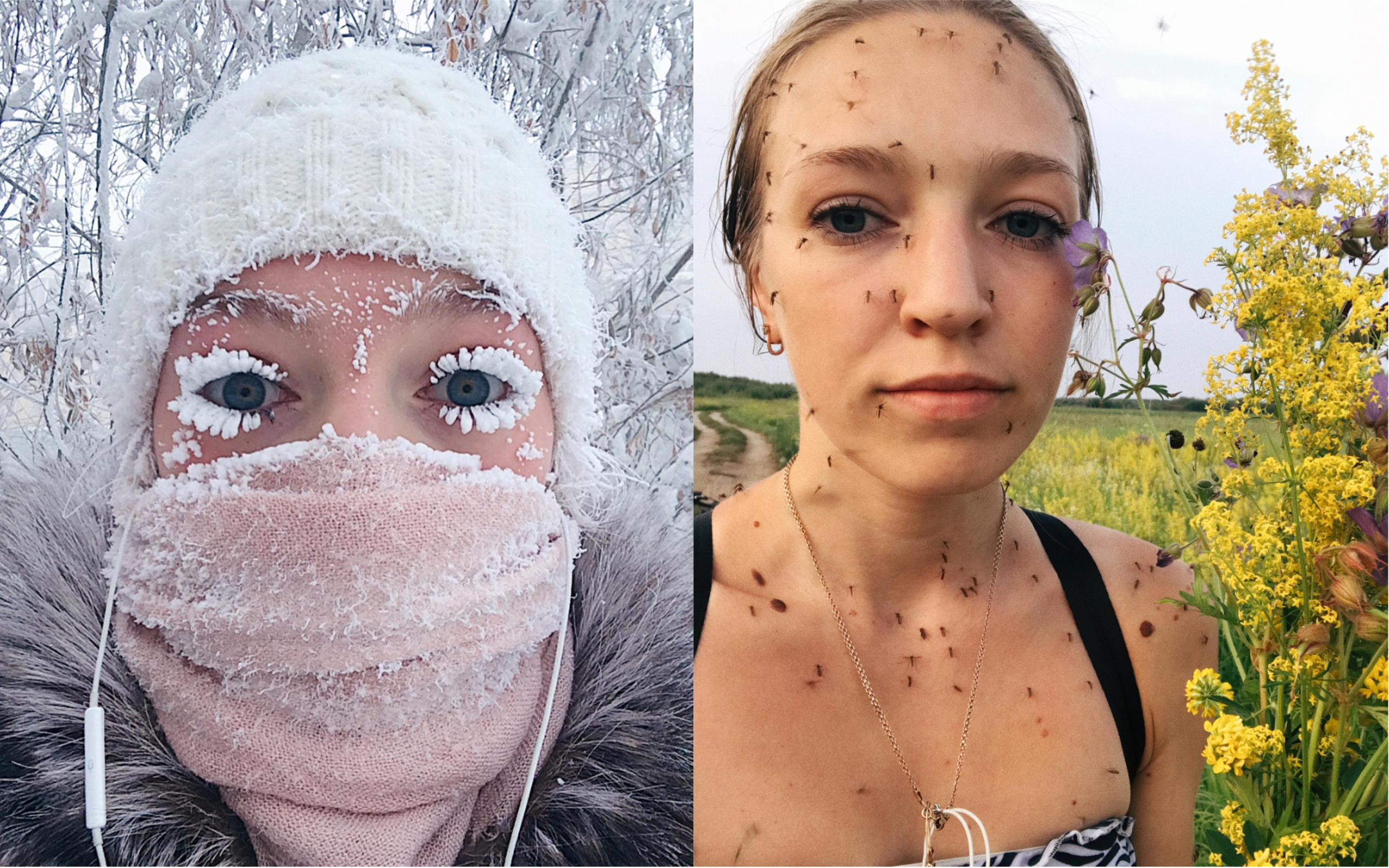 In January 2018, a woman from Yakutia, Russia, posted a photo that went viral of her frozen eyelashes, completely white with frost in extreme sub-zero temperatures. Now, six months later, another one of her selfies is taking off, but it is vastly different than the frozen eyelash photo.

Her name is Anastasia Gruzdeva and she's still in Yakutia, but temperatures in that part of Siberia these days are too hot, not too cold, and she is covered in mosquitoes instead of snow.

Gruzdeva posted the summer selfie on Monday, when temperatures reached the 90s. The photo shows mosquitoes covering her face and chest as she stands in a field of flowers. What makes summers so difficult in the region is the swarm of mosquitoes that infiltrate the area from May to September, NDTV reports.

"Arctic mosquito swarms are the stuff of legend. Some of them contain hundreds of thousands, if not millions, of insects," The Atlantic noted in 2015. "If the Arctic continues to warm, and there is every indication that it will, the summer tundra may soon be abuzz with larger and larger clouds of biting, blood-sucking insects."

Meanwhile, last winter, thermometers couldn't even keep up with the plunging temperatures in the remote Yakutia region, which hit minus 88.6 degrees Fahrenheit in some areas. Students in the region routinely go to school even when it's 40 below zero. But school was cancelled and police ordered parents to keep their children inside.

Gruzdeva ventured outside on a January day despite a temperature of about minus 58 degrees Fahrenheit. She bundled up, wrapping a scarf around most of her face, but she couldn't cover her eyes, which quickly froze. Her lashes looked frozen solid, with a stiff coating of ice covering them.

The drastic difference between temperatures in Yakutia's winters and summers has become a topic of discussion online. One person posted of a thermometer registering 38.8 degrees Celsius on Sunday — that's 101.8 degrees Fahrenheit. In a stark contrast, someone else shared a photo of the city of Yakutsk in the winter, when it's been known as "the world's coldest city."

It's hard to choose which is the lesser of two evils — extreme cold and a frozen-over face, or sweltering heat and swarms of mosquitos? It appears at least one person, Gruzdeva, isn't afraid to go out in either of the extreme climates.