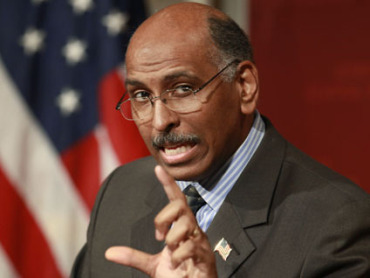 Wisconsin Republican party chairman Reince Priebus and former Bush administration official Maria Cino are both considering running for the chairmanship of the Republican National Committee, according to the Washington Post and Politico, even as current chair Michael Steele has yet to indicate whether or not he will run for re-election.

Priebus, who has been described in the past as a close Steele ally, told the Post that he has not yet decided whether or not he will run, but emphasized that "I've been asked to seriously consider it by many members of the committee and I am doing just that."

"I have worked with him for a number of years and the pickup of governor, senator, two House seats and control of the state house and senate was a profound victory in a historically difficult state," Gingrich said of the Wisconsin Republican.

Brady praised Priebus for being a "low-key, no-nonsense guy" who knows "how to manage an effective political organization," according to the Post.

Cino, too, has significant conservative support: The Washington-based lobbyist, who served as deputy secretary of transportation under Mr. Bush, apparently has the support of Mary Cheney, daughter of former Vice President Dick Cheney.

Recent reports indicate that Republicans are actively seeking an alternative to Michael Steele for the position, particularly after an election cycle in which Steele was plagued by a series of embarrassing scandals and gaffes.

According to the New York Times, Priebus previously warned Steele that "a run for re-election could prove difficult this time around, and advised him to consider leaving the chairmanship at a time when he could point to big Republican gains nationwide."

The Times also notes that Priebus is "personally uncomfortable" with the idea of challenging Steele for the position, given their friendship.

But Henry Barbour, a Mississippi Republican Party committeeman and nephew of Gov. Haley Barbour, said in an interview that, as much as he might like Steele personally, he thought it was time for a change.

"I like Mike Steele, and I've worked hard to support him as chairman," Barbour said. He added, however, "I do think we have to make a change, and I have actively talked to some other members in the last week or so and encouraged a few of them to consider running."

Barbour has apparently urged Preibus to consider challenging Steele but has so far stopped short of endorsing him directly, according to the Post.

"I am eager to see all the prospective candidates go out and see what sort of support they can build and then let's see where we are in about a month," Barbour said.

Former Michigan Republican Party Chairman Saul Anuzis announced his candidacy for the chairmanship earlier this month, but says his decision to run had nothing to do with Steele's performance. "I'm not running an anti-Steele campaign," he told The Daily Caller in a recent interview. "My pitch and my argument to the members is that the circumstances [of the committee] have changed."