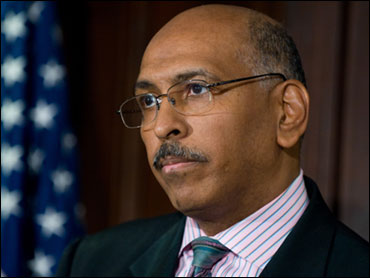 in the letter, obtained by Politico, Collins complains of poor fundraising by the RNC as compared to past years. He writes that while the RNC raised $284 million in the 2002 cycle and $243 million in the 2006 cycle, it has brought in just $170 million thus far in the 2010 cycle.

Much of that money, he writes, did not come from large donors, reflecting poor outreach efforts. The small donations, he suggests, "are reflective of the anti-Obama/Pelosi/Reid wave that drove energy and intensity to historic highs this cycle" - meaning they cannot generally be credited to Steele's group. In addition, he writes, it costs more to generate small donations, pushing the RNC's fundraising costs in the 2010 cycle to as much as 70 cents on the dollar.

Collins, who is described as a "respected" veteran operative, also reveals that the RNC is in debt.

"In the previous two non-presidential cycles, the RNC carried over $4.8 million and $3.1 million respectively in cash reserve balances into the presidential cycles," he writes. "In stark contrast, we enter the 2012 presidential cycle with 100% of the RNC's $15 million in lines of credit tapped out, and unpaid bills likely to add millions to that debt."

Outside conservative groups like the Republican Governors Association and American Crossroads were able to bring in large chunks money from major donors despite lacking the "brand strength" of the RNC, he adds. He dismisses Steele's argument that necessary spending for off-year elections can be blamed for the group's lack of funds, saying it accounted "for only one-quarter of the $43.6 million shortfall from the last non-presidential cycle."

The RNC's lack of resources meant that it was unable to establish a sufficient ground game in a number of states, potentially costing the party two Senate seats and three gubernatorial races, Collins argues. With more money, he adds, the RNC could have made 21 more House seats competitive, turning a Republican wave into a tsunami.

That's not all. Collins complains that the RNC lacked an independent expenditure unit "for the first time in the McCain-Feingold era," made far fewer contributions to candidates than in years past, and forced state parties to do the work the RNC had traditionally done, limiting their effectiveness in other areas.

"The RNC has a uniquely impactful role to play in American elections, and therefore in putting America back on the right track," he writes. "Sadly, if left on its current path, the RNC will not be a productive force in the 2012 campaign to deny President Obama a second term, retain our House majority, and elect a Senate majority."

Steele is up for reelection next year after his two year term, and many Republicans are determined to push him out after a gaffe-prone tenure. (Steele has not announced whether he will run for reelection in January, though he has signaled that he plans to do so.) Former Michigan GOP chairman Saul Anuzis has already announced plans to challenge Steele.