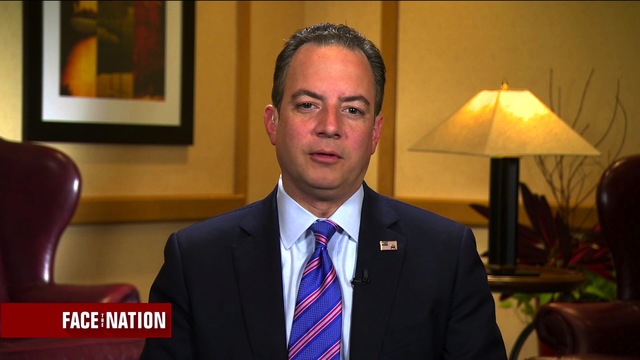 Republican National Committee Chairman Reince Priebus called Sunday for a renewed look at the schedule for presidential debates this fall, echoing GOP nominee Donald Trump in saying some of the dates have been set to suppress viewership.

"We're going to be working with the commission in what they're putting together," Priebus told CBS' "Face the Nation." "Certainly we're not going to agree with anything that our nominee doesn't agree with."

Still, Priebus stopped short of agreeing with Trump that the commission is "rigged," which Trump suggested in a Saturday tweet and his campaign chairman, Paul Manafort, also implied in an interview with "Face the Nation" earlier Sunday.

"Listen, I don't know about whether the commission is rigged, I just think there's a lot of flaws with this commission," Priebus said. "They're working hard, I'm not taking anything away from them."

The Commission on Presidential Debates, a nonpartisan committee that does not consult with either political party when putting together the slate of debates, announced the dates for the debates in 2015. The first presidential debate is slated for Sept. 26, which is a Monday; the second debate, on Oct. 9, is a Sunday. Trump pointed out that both of those nights will conflict with NFL games.

"Hillary Clinton and Donald Trump debating each other, which is of interest to the entire country ... there is a massive national interest, we just saw that in both national conventions breaking records," he said. "Why wouldn't we want to maximize the audience and the viewership?"

Asked about Trump's comments on his refusal to meet with billionaire donors Charles and David Koch, Priebus suggested there are "bruises" from the primary that still need to heal, adding that not all politicians who take money from special interests are bad.

"Look, I've had a good relationship with Charles and David ... I think we're a big family and I think some of these bruises take time to heal," he said. "I think at the end we actually are going to all be at the table."

"I don't think anyone's a puppet but I think what Donald Trump is saying and rightfully so is that he's a unique candidate who hasn't had to rely on a lot of these special interest money," he added. "I'm not saying all special interests are bad interests, and I don't think people who have to take money are necessarily bad."

And responding to the Democratic convention and Hillary Clinton's big speech Thursday night, Priebus blasted Democrats for painting a far rosier picture of the country than actually exists.

"The whole Clinton campaign is a fantasy land, you saw that last week," he said. "Everything is great, it's all vanilla ice cream and cotton candy, nothing to see, no talk of ISIS, everything's on the right track."