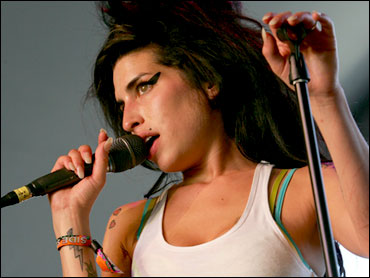 (CBS/AP) R&B singer Amy Winehouse influenced a generation of musicians on both sides of the Atlantic, though her musical output was small - just two albums and 10 singles.

Winehouse, who had been playing guitar and writing songs since she was in her teens, gained fame in 2003 with her debut album "Frank" A critical success, it was nominated for the BRIT Awards and was shortlisted for the 2004 Mercury Music Award.

Winehouse, then just 20, won the Ivor Novello songwriting Award for her first single, "Stronger Than Me."

She followed it up in 2006 with "Back to Black," which topped the charts in both the U.K. and the U.S. That album spawned several hit singles, including "Rehab" which Time magazine called the best song of the year.

The following winter, Winehouse won five Grammy awards, including Record of the Year, Song of the Year for "Rehab," and Best Female Pop Vocal Performance. She set a record for the most Grammys won in a single year by a female British performer.

Since that success, Winehouse did some touring but little studio work. She nevertheless influenced a wide range of female musicians in the U.K. and U.S. with her blend of jazz, soul, rock and classic pop.

Among those who have cited her as an influence were New York-born Lady Gaga and British singers Adele, Duffy, Lily Allen and Florence Welch of Florence and the Machine.

Winehouse was last publicly seen on at a London concert on Wednesday when she joined her goddaughter, Dionne Bromfield, on stage. In that impromptu appearance, Winehouse danced with Bromfield and encouraged the audience to buy her album, before leaving the stage.