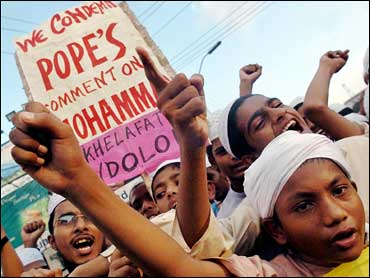 Pope Benedict XVI "sincerely regrets" that Muslims have been offended by his words about Islam and violence in a speech, the Vatican said Saturday in a statement which stopped short of the apology demanded by many Muslim leaders in the Middle East and Asia.

Anger and some violence — Palestinians attacked five churches in the West Bank and Gaza — erupted through much of the Muslim world over a speech Benedict delivered to Regensburg university professors during a pilgrimage earlier in the week to his native Germany.

On Tuesday, Benedict, quoting from an obscure Medieval text, cited the words of a Byzantine emperor who characterized some of the teachings of the Prophet Muhammad, Islam's founder, as "evil and inhuman."

Turkey cast some doubt on whether Benedict will travel there in November in what would be his first trip to a Muslim nation. Morocco recalled its ambassador to the Holy See to protest "offensive" remarks by the pope.

The Vatican said the pope's trip has not been cancelled, CBS News correspondent Sabina Castelfranco reports.

Turkish Prime Minister Recep Tayyip Erdogan insisted that the pontiff apologize to the Muslim world. When asked if the flap would affect the planned trip to Istanbul, where the pope hopes to meet with Orthodox leaders who are headquartered there, Erdogan left open the possibility of cancellation.

"I wouldn't know," the Turkish premier replied when asked if the trip would go forward. Erdogan said Benedict was speaking "not like a man of religion but like a usual politician."

The Orthodox Patriarchate in Istanbul, the spiritual center for the world's Orthodox Christians, said that the "course which relations between the Christian and Muslim faiths is taking .... is deeply hurting" Patriarch Bartholomew I.

The new Vatican secretary of state, Cardinal Tarcisio Bertone, said the pope's position on Islam is unmistakably in line with Vatican teaching that says the Church "esteems" Muslims.

The pope "thus sincerely regrets that certain passages of his address could have sounded offensive to the sensitivities of the Muslim faithful and should have been interpreted in a manner that in no way corresponds to his intentions," Bertone said in a statement.

"Indeed it was he who, before the religious fervor of Muslim believers, warned secularized Western culture to guard against 'the contempt for God and the cynicism that considers mockery of the sacred to be an exercise of freedom,"' Bertone said, citing words from another speech by Benedict during the German trip.

Bertone is the Vatican's No. 2 official, and was a longtime aide to Benedict when the pontiff was a German cardinal in charge of doctrinal issues at the Vatican under Pope John Paul II.

Mohammed Bishr, a senior Muslim Brotherhood member in Egypt, contended that the Vatican's statement "was not an apology" but a "pretext that the pope was quoting somebody else as saying so and so."

"We need the pope to admit the big mistake he has committed and then agree on apologizing, because we will not accept others to apologize on his behalf."

The pope's first appearance to the general public since his return from Germany on Thursday is set for Sunday, when Benedict is to greet the faithful at Castel Gandolfo, the papal summer residence in the Alban Hills near Rome.

Bertone said that the pontiff at Regensburg condemned all religious motivation for violence, "from whatever side it may come."

But the pope's words only seemed to fan rage.

In West Bank attacks on four churches, Palestinians used guns, firebombs and lighter fluid, leaving church doors charred and walls scorched by flames and pocked with bullet holes. No one was reported injured. Two Catholic churches, an Anglican one and a Greek Orthodox one were hit. A Greek Orthodox church was also attacked in Gaza City.

In a phone call to The Associated Press, a group calling itself "Lions of Monotheism" said the attacks were in protest of the pope's remarks on Islam.

When giving the speech, the pope stressed that he was quoting words of a Byzantine emperor and did not comment directly on the "evil and inhuman" assessment.

Bertone, referring Saturday to the emperor's "opinion," said "the Holy Father did not mean, nor does he mean, to make that opinion his own in any way."

The prelate pointed out that the pope was speaking in an academic setting, at the university where the pope had taught theology when he was professor Joseph Ratzinger, before working at the Vatican.

Bertone contended that Benedict was reflecting in general on the relationship between religion and violence and that the pope ended the speech with a "clear and radical rejection of the religious motivation for violence, from whatever side it may come."

Benedict had quoted from a book recounting a conversation between 14th century Byzantine Christian Emperor Manuel Paleologos II and an educated Persian on the truths of Christianity and Islam.

"The emperor comes to speak about the issue of jihad, holy war," the pope said.

"He said, I quote, 'Show me just what Muhammad brought that was new, and there you will find things only evil and inhuman, such as his command to spread by the sword the faith he preached,"' he quoted the emperor as saying.

The prime minister of Malaysia, with a large Muslim population, demanded that Benedict retract his remarks and not "take lightly the spread of outrage that has been created."

In a first reaction from a top Christian leader, the head of Egypt's Coptic Orthodox Church said in remarks published Saturday in the pro-government newspaper Al-Ahram that Benedict's comments on Islam went "against the teachings of Christ."

In predominantly Muslim and officially secular Turkey, Catholics are a tiny minority, and Benedict's main goal in going there is to meet with Orthodox leaders, who have their headquarters in Istanbul for historical reasons. But the trip, following an official invitation by the Turkish president earlier this year, was also likely viewed at the Vatican as a vehicle to continue Benedict's professed goal of working for better relations between cultures and religions.

The pope's vicar in Anatolia, Monsignor Luigi Padovese, told The Associated Press by telephone that the Turkish media had misunderstood the pope and that trip plans are "something which the Holy See and the Turkish authorities will have to work out together."

Padovese said that a bishops' conference meeting long scheduled for Monday in Istanbul would go ahead. The meeting was supposed to discuss the pope's trip "even though we don't know if the pope is coming or not" now, the vicar said. He added that Catholic-Muslim tensions in Turkey "aren't a new thing."

A Catholic priest was slain earlier this year in his church in a Black Sea town amid tensions over the newspaper caricatures of the Prophet Muhammad that first appeared in a Danish newspaper.

British Muslims welcomed Bertone's statement but one leader, Muhammad Abdul Bari, general secretary of the Muslim Council of Britain, said the pope needed to repudiate the views he quoted to restore relations between Muslims and the Catholic Church.

In India, Cardinal Telesphore Toppo, who is president of the Indian Catholic Bishops conference, said that the Christian community in that country must face Muslim protests over the pope's speech "with Christian courage and prayer because truth needs no other defense," according to AsiaNews, a Vatican-affiliated news agency.