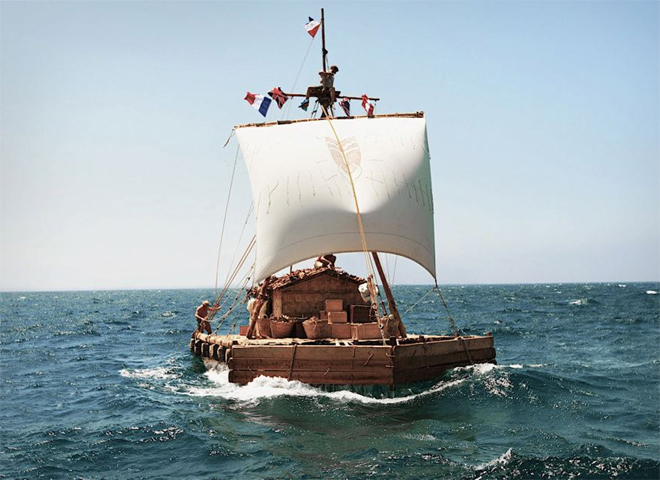 (CBS News) A tiny ocean ocean-going craft, little more than a raft called "Kon-Tiki," captured the world's imagination more than half a century ago. And now a new film is reminding us of how much its voyage taught us -- about the mysterious ways of the sea, and about the equally mysterious determination of man. Serena Altschul welcomes us aboard:

Climbing aboard this small wooden raft, you can't help but feel like you're stepping back in time . . . back to 1947 when the original "Kon-Tiki" crossed the Pacific Ocean, helmed by Norwegian adventurer and anthropologist Thor Heyerdahl.

"He believed that the oceans were roads, basically, 1,500 years ago," said filmmakers Joachim Ronning. "And he spent ten years trying to get his theory accepted. And then when nobody believed him, he made a decision one day to go out and prove it."

"And people thought he was crazy?" Altschul said.

"Yeah, and he probably was!"

Ronning and Espen Sandberg brought their replica of the Kon-Tiki to New York City Harbor to promote their new movie about Heyerdahl and his legendary trip.

Their new movie, "Kon-Tiki," isn't the first film about the expedition; Heyerdahl himself won an Oscar in 1951 for the documentary he made to accompany the bestselling book about his time at sea.

They said Heyerdahl and his crew were heroes to them as children.

"He touched so many people, you know, including us," said Ronning.

Sandberg added, "I think he's a good hero in the way that a lot of the idols, as they call it now, that the young people have from music and all that -- I think Thor is a good alternative."

After living in Polynesia, Heyerdahl became convinced the islands had been settled by explorers from South America -- to the East -- and not by people from Asia, to the West, as was widely believed.

To prove the voyage possible, he recruited five companions (and one parrot) to join him aboard the cramped, 45-foot-long raft for the 4,300-mile journey from Peru to the Polynesian Islands.

To insure authenticity, Heyerdahl insisted on building the Kon-Tiki out of balsa logs, using the same construction methods and materials available to the ancient Peruvians.

Altschul met Ronning and Sandberg at the Explorer's Club in New York, where the very flag that flew on the Kon-Tiki still hangs.

The voyage of the Kon-Tiki was a worldwide sensation. Millions awaited the periodic reports in Morse code from the on-board radio, and the crew became instant celebrities.

It was, Ronning suggested, the world's first reality show. "He brought with him two guys that could operate the radio, only one guy that could navigate," he laughed.

But the journey was harrowing from start to finish. The raft was virtually impossible to steer, and without any sort of engine, it was at the whim of the currents and the winds. It was constantly threatened by sharks, and the men were completely exposed to the elements.

As for Heyerdahl himself, he was afraid of the water. "He couldn't even swim," said Ronning. "Makes for an interesting character!"

"To set sail on this adventure and this expedition and not be able to swim, he really was committing to something extraordinary," said Altschul.

"Yeah, absolutely," said Ronning. "And in a way, as we discovered, I think that he would rather drown than be wrong."

Against all odds, 101 days after they launched, the Kon-Tiki reached the shores of Polynesia, ensuring Heyerdahl would be considered among the greatest explorers of the 20th century.

"He completed the expedition, he succeeded -- but do people believe the theory now?" Altschul asked.

"No," said Ronning. "And that wasn't the point, in a way, because he wanted to prove that it could be done."

But while the Kon-Tiki's journey was finished, its legend continues to inspire.

"I think there's a lot of people out there that has a dream -- take half a year off work and then climb that mountain or whatever. And maybe this movie somehow can inspire to that," said Ronning.

"Even if people tell you you're crazy?" asked Altschul.

Web extra (Spoilers!): The Visual Effects & Animation Supervisor of "Kon-Tiki," Arne Kaupang, has posted on Vimeo an FX reel that reveals how some of the film's digitally-enhanced and computer-generated effects were composited.