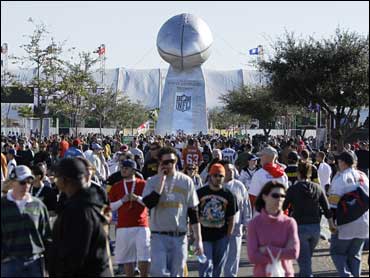 From crazed fans … "Here we go, Steelers, here we go!" … to crowded hotels, the country's biggest sports party is in full swing.

A hundred thousand out-of-town guests have flocked to Tampa to watch Arizona and Pittsburgh clash, with the Steelers trying to capture their record sixth Super Bowl title and the Cardinals their first.

It's good timing for Tampa. Before this week, tourism officials say, hotels were down 15 percent compared to the same time last year.

"Just talking to the hotels, just talking to people in the industry, this is a huge shot in the arm for them," Steve Hayes of the Tampa Bay Convention & Visitors Bureau told CBS News correspondent Kelly Cobiella.

Lee Trythall and his son Max are spending $1,500 dollars for five days … tickets not Included.

"He'll meet a hundred players and get some autographs and miss three days of school!" said the proud dad.

But still, the recession is leaving its mark.

With the nation slogging through its worst financial crisis since the Great Depression, there was buzz America's No. 1 sporting event could be played to empty seats. Brokers and scalpers still had plenty of tickets left the day before the game.

Hotels had vacant rooms, restaurants had empty tables. A gala at the aquarium hosted by former star Warren Sapp slashed the price in half once it started.

Some of the usual trappings were missing.

In July, Darren Diaz began showing Playboy representatives some potential locations for its annual bash. But no money, no bunny. The magazine canceled its party last month.

"They were in the process of deciding," said Diaz, whose family has run a catering business since 1924. "It's a shame. Had this Super Bowl been held four months earlier, this probably would have never been an issue."

It was a pocketbook issue for Lena Chamra, as she leaned in for a closer look at the gray pullover jacket with the sharp Super Bowl logo. It was exactly what she wanted, and she stared for a full minute … then walked away.

"I liked it a lot, but not at $145," she said inside the lobby at the NFL's headquarters hotel. Back home in Raleigh, N.C., that's her electric bill.

"My husband lost his job two months ago, so I'm watching everything," she said. "I will freeze before I pay $145. We don't have that money right now."

The NFL, the richest sports league in America, readily admits it's feeling the crunch. Several people wandered by a huge picture in the media center of the Dallas Cowboys' new $1.1 billion, 100,000-seat stadium and wondered whether they'd fill it for the Super Bowl in two years.

"I've been very clear that we're not immune to what's going on out in the economy. There's a tremendous amount of uncertainty; uncertainty clearly breeds fear," commissioner Roger Goodell said Friday in his state of the game speech.

"For people who've lost their jobs, can they continue to afford to come to an NFL game, or to any other event?" he said. He added: "I also believe, very firmly, that in a time like this, the NFL can become an extremely invaluable escape for people."

Chamra, who passed up the pullover jacket, focused on saving money.

A big Giants fan, she went to the Super Bowl last year in Arizona and was rewarded when New York upset the Patriots. Along with memories, she came home with several mementoes.

"I dropped $455 on jerseys, hats, everything, the moment I landed. We rented a limousine the whole weekend and ate at Ruth's Chris Steak House. We did not even look at the prices," she said.

This year, it's a bit different.

Chamra prepaid $2,500 for a Super Bowl package, then tried to back out when the Giants lost in the playoffs. Too bad for her, she was locked in.

So this weekend, with her sister, brother and nephew, she's eating the breakfast buffet at her hotel and skipping lunch. She parked 10 blocks away from her downtown destination, rather than pay $30 on-site. And she held off buying any souvenirs.