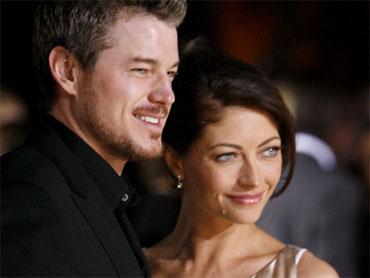 NEW YORK (CBS) The legal battle between Gawker and actors Eric Dane and Rebecca Gayheart has been settled after the website agreed to take down the couple's homemade sex tape in return for  them not suing the bejeezuz out of the gossip blog.

The lawsuit claimed that Gawker "maliciously" distributed an uncensored version of the sex tape and refused to comply with a cease and desist order.

According to Reuters, Gawker and the couple agreed to private mediation, which facilitated a settlement that was filed with the Los Angeles County Superior Court last week. Sources close to the case valued the settlement in the low-six figures.

Dane and Gayheart were originally asking for more than $1 million in damages.

"Although we are confident that our use of the video on Gawker was protected fair use -- because the posts already had been available to our readers for nearly a year, and because we already had won an important decision from the court striking large parts of the plaintiffs' damages claims -- we agreed to remove the posts as part of a global settlement to avoid the burden of further litigation," Gawker chief operating officer Gaby Darbyshire said in a statement obtained by Reuters.

Dane first appeared in ABC's highly rated show, "Grey's Anatomy," in 2005, in which he played Dr. Mark Sloan, also known as McSteamy. His popularity with fans led to a regular role on the show.

Gayheart is a television and film actress known for roles in "CSI: Miami," "Nip/Tuck," and "Vanished." She also had a recurring role in the original Beverly Hills 90210 series.

Peniche is a former beauty queen who won Miss United States Teen, but was stripped of her title after appearing nude in Playboy.

At one point in the video, Gayheart, who seems to be holding the camera, says "I need to lay down too. I am very high." She then joins a naked Peniche, who was lounging on the bed.

Gawker had released a 12-minute edited version of the video in which everyone's lower private parts are blurred over. Other sites have been more revealing.