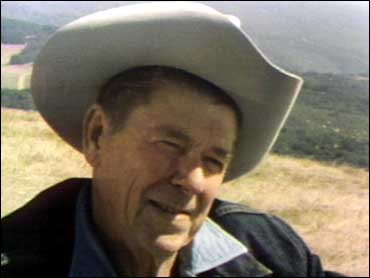 Nearly a decade after disclosing he has Alzheimer's disease, former President Ronald Reagan is doing well and isn't suffering as the memory-sapping disease tightens its grip, his son said.

The younger Reagan visited his father a month ago.

"He's still got rosy cheeks and a thick head of hair," his son said by phone from his Seattle home. Ron Reagan, who rarely comments about his family, has been promoting an article he wrote for the June issue of Esquire magazine.

But a father-son swimming competition when Ron Reagan was 12 remained locked in the memory banks of the former president when the two Reagans relaxed poolside in 1995.

That race decades earlier in Sacramento was still fresh in the ex-president's mind; it was the first time the former lifeguard's son finished first.

"'It was your flip turn that did it. Till then, you know, we were even,"' Ron Reagan recalls his father saying that summer day. Nine months earlier, the nation's 40th president announced in a poignant letter that he had Alzheimer's.

Ronald Reagan is now a recluse at his Bel-Air home, cared for by former first lady Nancy Reagan and nurses. In July, Mrs. Reagan will attend the July 12 commissioning of the nation's latest aircraft carrier, the USS Ronald Reagan, in Norfolk, Virginia.