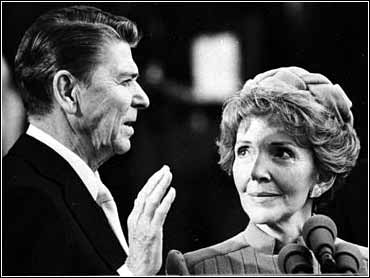 Ronald Reagan has joined John F. Kennedy and Abraham Lincoln as those mentioned most often in a poll that asked Americans whom they regarded as the greatest president of the United States.

A year ago, Kennedy and Lincoln were mentioned most often in the Gallup poll asking that question, while Mr. Reagan was slightly behind along with Franklin Roosevelt.

Mr. Reagan moved up among the top three this year in the poll taken soon after news stories about his 90th birthday and his recovery from a broken hip.

This year, Mr. Reagan, Kennedy and Lincoln were followed by Bill Clinton, Franklin Roosevelt, Harry Truman, George Washington and Jimmy Carter, who were grouped together in the Gallup Poll. Also getting first-place votes were George H.W. Bush, father of the current president, Theodore Roosevelt, Richard Nixon and Dwight Eisenhower.

Others were mentioned by a combined 5 percent.

Mr. Reagan was mentioned by 18 percent, Kennedy by 16 percent and Lincoln by 14 percent in the poll of 529 adults taken Feb. 9-11. The poll had an error margin of 5 percentage points.

Two years ago, Lincoln was first, and Reagan, Kennedy, Mr. Clinton and Washington were grouped right behind him.

When people were asked whether they would prefer to see George Washington or Abraham Lincoln as president today, six in 10 said Lincoln and just under three in 10 said Washington.

Gallup released the poll data for Presidents Day, which is celebrated Monday. The holiday was originally celebrated on Feb. 22 each year on the birthday of Washington, the nation's first president.

But, in 1968, Congress decided to make it a three-day weekend, setting the holiday marking the first president's birthday as the third Monday in February.

In 1971 President Nion issued a proclamation declaring the holiday Presidents Day in order to also honor Abraham Lincoln, who was born Feb. 12.