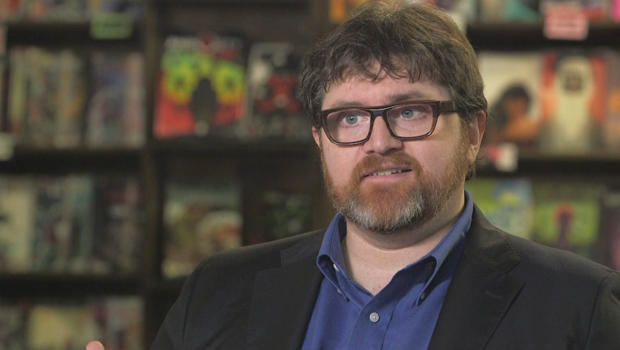 When Steven Spielberg, no less, decided to make a movie based on a book by a novice author, our Brook Silva-Braga just had to find out why:

Ernie Cline's life looks like something out of a certain kind of '80s movie -- the implausible kind, where a geeky hero gets to live out his wildest dreams -- as when he steps into his DeLorean.

The car, of course, was immortalized in "Back to the Future" -- a film, and a concept, Cline has thought a lot about.

"If I traveled back in time to talk to my younger self, he just wouldn't believe any of this," he said. "I have a hard time believing it now!"

And who could blame him?

In 2011, Cline's debut novel, "Ready Player One," became a bestseller. And now he's just finished work on the movie version, alongside none other than director Steven Spielberg.

Cline's main qualification for the job was, well, being a big fan of Steven Spielberg movies.

Brook Silva-Braga asked, "When you started 'Ready Player One,' how much fiction had you even published?"

"I had not. 'Ready Player One' is my first published work," he said.

"Something in a literary magazine? Short story?"

"Ready Player One" envisions a dark future in which people spend most of their time plugged into a virtual online world.

Promotion of the film has taken over the real world, including a massive interactive exhibit in Cline's hometown of Austin, Texas.

Cline and his brother, Eric, were raised in rural Ohio by a mix of their grandparents … and an Atari console.

A love for "Star Wars" fed Cline's dreams of someday working in the movies. But for years the closest he came was a job as a video store clerk.

When writing screenplays didn't quite work out, he started a novel. Nine years later, with a baby daughter to support, Cline finally sent the book to publishers.

"And then the very next day, we had sold the rights to 'Ready Player One' for more money than I ever imagined I would make, or anyone in my family had ever made," he said. "My whole life had just changed in that first 24 hours. And then they said, 'Oh, by the way, now there's a bidding war going on in Hollywood for the film rights.'"

When asked why he thought it would make a good movie, Spielberg said, "Well, because it's a great adventure. I wanted to make this because I hadn't made an adventure film like this, my God, for decades."

When Spielberg signed on to direct, Cline, the ultimate fanboy, became his collaborator. "He's an authority on popular culture," Spielberg said. "And when we made the movie we kept going back to Ernie just to pick his brain."

Silva-Braga asked, "Was he able to play it cool around you?"

"You know, yeah, I think he was hanging on a little bit."

Cline said, "You know, even now just talking to him, I'll hang up the phone after having a conversation with him: 'I just talked to Steven Spielberg!' It never goes away, because he was such a giant figure in my childhood."

"Yeah, you have Steven Spielberg's number in your phone!" said Silva-Braga.

"I can get a hold of him if I need to, but he doesn't hand out that number!"

Success has given Cline bigger toys, but he says it's love for the little ones that got him here. To make the point, he brought out the Atari console he got for Christmas in 1978, and started playing a game called "Adventure." "It was the first virtual reality game that I ever played," he said.

In the flashing, fuzzy pixels, young Ernie found a secret room in the game, where the designer had hidden his name. "And that was just a profound moment," he said.

Years later, that moment gave Cline the idea for a virtual scavenger hunt … the plot of "Ready Player One."

Silva-Braga said, "It's a story about someone trying to use their love and knowledge of '80s pop culture to achieve fame and fortune -- and you're the person who did that."

"I know! I feel like I am a testament to what happens if you be free about what you love and why you love it and not [be] afraid or worried about what other people will think of your love or your passions," Cline said. "Just be bold and celebrate the things that you're passionate about, and amazing things can happen!"