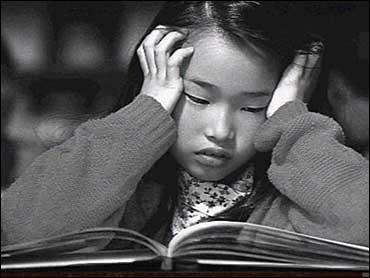 Fourth-graders in 2002 showed significant reading gains compared with 1998, according to the National Assessment of Educational Progress, known as the nation's report card, released Thursday. It is those younger students who are at the center of a national push to improve basic education.

Overall, less than a third of fourth-graders (31 percent) and eighth-graders (33 percent) showed they could understand and analyze challenging material. That skill level, defined as proficient, is the focal point of the test. Among high-school seniors, 36 percent hit that mark, down from 40 percent in 1998.

The up-and-down results drew expectedly a mixed reaction from education officials. They highlighted the gains in reading fundamentals, particularly among minorities, but could not ignore a 12th-grade drop-off that has ranged from math to science to reading in recent years.

"There are no scientific answers as to why our high school seniors have performed so poorly on this reading assessment, but we're still searching for solutions to these daunting challenges," Education Secretary Rod Paige said. "At the same time, we know what works to teach youngsters to read, and we know that all children can learn."

Among fourth-graders, black and Hispanic students narrowed the scoring gap between themselves and white students. However, the gap remains significant: 41 percent of white students read at a proficient level, up from 37 percent in 1998. That compares with 12 percent for blacks, up from 10 percent, and 15 percent for Hispanics, an increase from 13 percent.

The reading test is overseen by the independent National Assessment Governing Board and run by the National Center for Education Statistics, an arm of the Education Department. Results of the other topic tested in 2002, writing, are scheduled to be released in July.

The assessment is designed to measure skills students should possess in a given grade, with the goal being for all students to be above basic, which is partial mastery of key skills. In reality, typical performance in all three grades reached only basic achievement.

Whether the test's standards are fair is often debated. On their own tests, for example, many states define proficient in a way that equates with only the basic level nationally.

Student performance trends differ slightly when the numbers are compared with 1992, the year the current reading test began. Since then, fourth-grade achievement has essentially been flat, eighth-grade scores have climbed and 12th-grade results have declined overall.

The results released Thursday also include reading performances for most states in grades four and eight. The policy board did not establish a state-by-state breakdown for grade 12.

The reading tests were the first to include special accommodations, such as extra testing time, for disabled and limited-English students in all test samples. But if the national test did not offer an accommodation typically provided in that state, reading a test aloud, for example, students could be excluded. Test officials say the impact should be "minimal."

Charles Smith, executive director of the test's governing board, said he expects some observers to challenge the validity of the findings based on the way the sampling was done.

"All of this is to be expected and welcomed, particularly in a year when results showed some signs of significant improvement," he said. On balance, though, cautious optimism is a "reasonable reaction" to the results, he said.