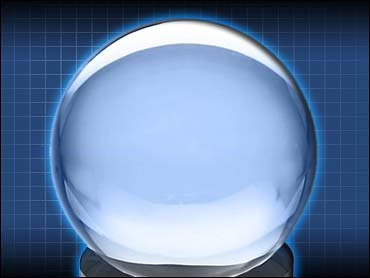 Why wait for next year to read next year's news? You can read it right now. Here are my predictions for 2005.

Ken Jennings Goes Hollywood: When squeaky-clean Jeopardy winner Ken Jennings leaves his wife, his kids, and his religion, and moves to Hollywood to host a talk show, he will not marry Britney Spears. They will just be good friends and Kabbalah partners.

Too Many Medals: President Bush will inexplicably continue to give Presidential Medals of Freedom to officials who resigned because of their failures in security and other policy areas. New medals will have to be made of plastic because of the resulting shortage from so many metal medals.

The Crawl On Washington: Millions of babies will jump out of their strollers and crawl to Washington to protest their concern that they will never collect a penny in Social Security.

FDA Pain: In February, the FDA will declare that aspirin is the only safe medicine for Americans to take.

BCS Rules Change: In college football, the BCS revises its rules and declares every college Number One in the nation.

Ex-Champ Still Punching: Mike Tyson gets in yet another barroom brawl, and is sentenced to 30 days in jail. Soon after that, President Bush awards him the Presidential Medal of Freedom.

Rumsfeld Still Not Signing: A waiter in a posh Washington restaurant informs Defense Secretary Donald Rumsfeld that he must use an actual pen to sign for his credit card, not an "autopen."

Same Old Condi: Condoleezza Rice goes for the entire year — yet again — without ever breaking into a smile.

New SUV Perfect For Short Commutes: General Motors introduces the biggest SUV, which is designed for short commutes. It is 5 miles long. It doesn't actually move anywhere. You just get in the rear door, walk through the car, exit the front door, and you're at work.

Dollar Value Something To Sneeze At: Problems in the timber industry cause an unexpected shortage in tissue. Inventive Americans solve this problem by blowing their noses into almost worthless $20 bills.

It's Kobe's Ball: Kobe Bryant will fire the rest of his Laker teammates, but continue to play one-against-five for the rest of the season. The Lakers still make the playoffs.

More FDA Pain: In June, the FDA will declare that aspirin is dangerous — It may cause headaches.

Confused Consumers: A new cellular phone is introduced. It doesn't take pictures, it doesn't have an alarm clock, and you can't use it for the Internet. It just makes telephone calls. Public doesn't know what to make of it.

Democrats Call It Quits: The Democratic Party dissolves and disbands. They will no longer run any candidates for national office. The chairman of the Democratic National Committee explains, "Oh, what's the point anymore?"

We've Got Him: While searching for a possible cabinet appointee without a skeleton in his or her closet, administration officials accidentally stumble on Osama bin Laden. They capture the evil mastermind, imprison him, and the free world celebrates his capture. Two weeks later, President Bush awards him the Presidential Medal of Freedom.

Have a happy and healthy New Year