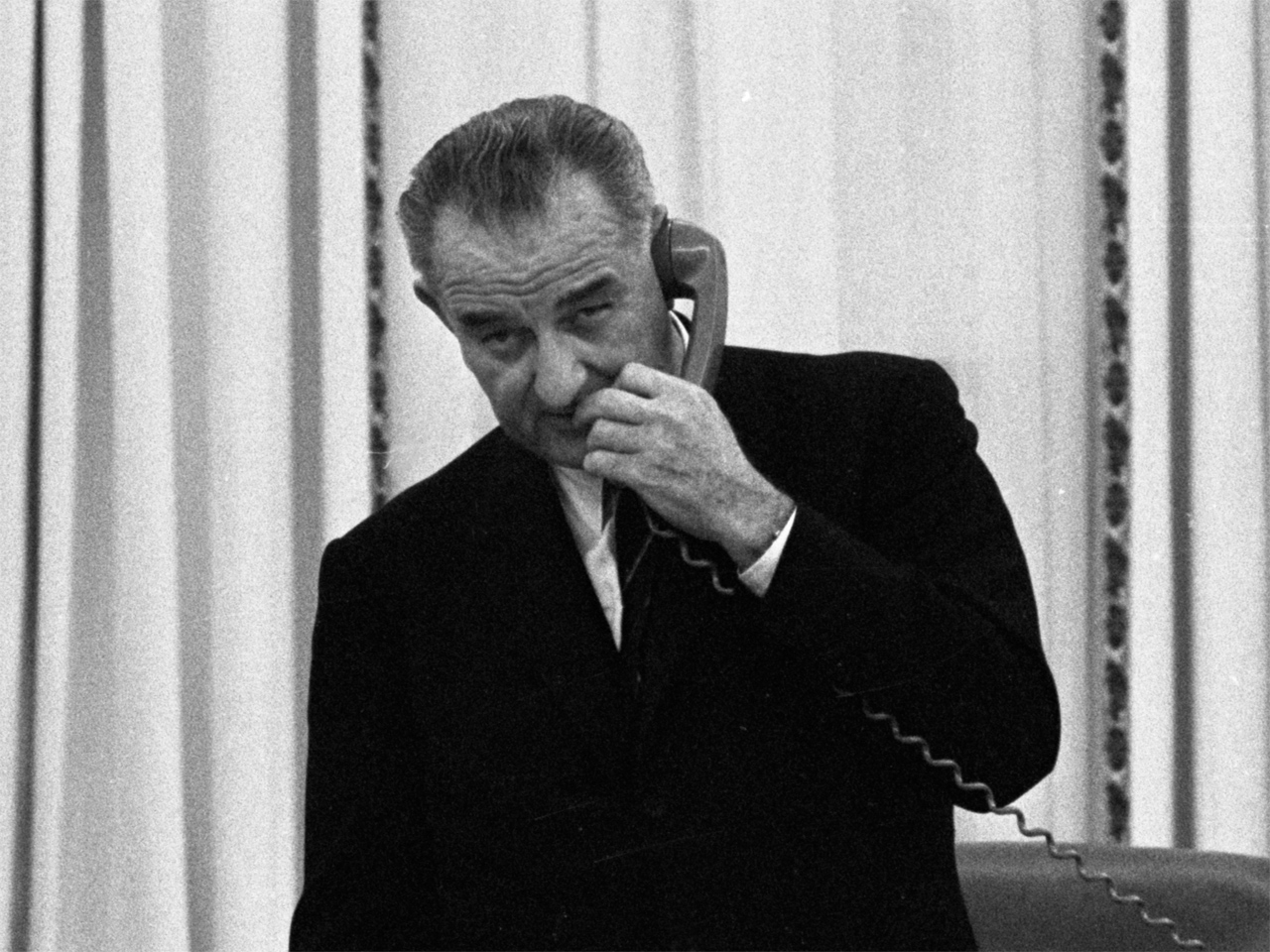 Forty-six years ago tomorrow, millions of Americans heard a stunning televised announcement by President Lyndon Baines Johnson. Entangled in the unpopular Vietnam War, he told them he was not running for another term in the 1968 presidential election. How to balance LBJ's domestic achievements against his controversial war is a debate that has raged ever since. As historians take another look at his legacy, a familiar TV star is playing him on stage. David Martin has reserved us a seat:

"As a Southerner I've had to bite my tongue on this issue my entire life until my mouth was full of blood. Well, not anymore."

The issue is race, and the Southerner is President Lyndon Baines Johnson, as played by Bryan Cranston on Broadway. After five years as the chemistry teacher-turned-meth dealer on "Breaking Bad," Cranston has let his hair grow to capture the ambition and tragedy of the larger-than-life Texan.

"The only thing that I really felt about Lyndon Johnson coming into this production was his Waterloo: Vietnam," Cranston told Martin. "And, you know, 'Hey, Hey, LBJ, how many kids did you kill today?'"

What Cranston found in the script, written by Pulitzer Prize-winning playwright Robert Schenkkan, was very different: "This play, 'All the Way,' covers that first year, and it is Lyndon Johnson really at his best, when he accomplished something that many people thought could never be accomplished, the Civil Rights Act of 1964."

"You see him as a heroic figure?" Martin asked.

"In many ways, yes, because he went against the norm in a time, in the early '60s, when he just as easily could've just let it be the status quo," Cranston said.

"What the hell's the point of being president if you can't do what you know is right?"

The real LBJ actually spoke those words in the dark days after Dallas, rejecting the advice of aides who told him it was bad politics to attempt a civil rights bill. In a speech to Congress on November 27, 1963, Johnson said, "No memorial oration or eulogy could more eloquently honor President Kennedy's memory than the earliest possible passage of the Civil Rights Bill for which he fought so long."

To Lyndon Johnson, ending segregation was about more than honoring a dead president. It was about his own experience as a young man teaching Mexican-American children in a forsaken little Texas town called Catulla:

"There would come a day for each and every one of them when I would see the light in their eyes die, because they discovered that the world hated them just 'cause of the color of their skin."

For all his charisma John F. Kennedy had failed to pass civil rights legislation. But Johnson, with his encyclopedic knowledge of Congress, knew how to bend it to his will.

In a speech to Congress in March 1965 Johnson said, "It never even occurred to me in my fondest dreams that I might have the chance to help the sons and daughters of those students [from Catulla]. But now I do have that chance -- and I'll let you in on a secret: I mean to use it."

He tape recorded virtually every phone call he made as president, during which he horsetrades with Senate Republican leader Everett Dirksen, getting his vote on civil rights in return for a flood control project.

DIRKSEN: "The total cost of the project is $30-some million. Now it's in that area of Illinois that's distresssed."
JOHNSON: "Let me get on it and I'll call you back."

Twenty-two minutes later, LBJ told Dirksen he would have his project;

JOHNSON: "So don't you tell anybody now that you've got a back door to the White House."

Even his Attorney General Robert Kennedy, who hated him almost as intensely as he mourned his dead brother, had to hand it to LBJ: "It'd be just a miracle getting this bill. Who could have thought a year ago that we could get this bill?"

When Johnson signed the bill into law on July 2, 1964, Martin Luther King stood front and center. John Lewis, one of the frontline soldiers in the battle against segregation, saw its impact:

"It brought down door signs that said 'White Men' and 'Colored Men,' and those signs are gone. Those visible signs are gone and they would not return," he said.

"The country we're living in today is more Lyndon Johnson's country than the country of any other President we've had," said Joseph Califano, who beginning in 1965 was Johnson's chief domestic adviser. "We were passing about a hundred bills a year, a hundred significant bills a year, many more than that."

Medicare, Medicaid, federal aid to education, clean air, clean water -- a whirlwind of legislation that made up Johnson's Great Society.

When state troopers attacked civil rights marchers in Selma, Ala. -- clubbing John Lewis to his knees -- Johnson responded with a speech to a joint session of Congress calling for passage of another landmark bill, the Voting Rights Act.

"It is wrong -- deadly wrong -- to deny any of your fellow Americans the right to vote in this country."

And then, in an act of transcendent symbolism, the President of the United States embraced the refrain from the great civil rights anthem:

"It is all of us who must overcome the crippling legacy of bigotry and injustice. And we shall overcome."

"I was sitting next to Martin Luther King Jr," recalled Lewis, "and I looked at Dr. King, tears came down his face. He cried, and we all cried a little to hear President Johnson say, 'And we shall overcome.'"

But at the same time he was using his political genius to transform America, Johnson was dragging the country into a war he knew he could not win.

His granddaughter, Catherine Robb, says the LBJ Library in Austin, Texas, makes no attempt to downplay the tragedy of the war: "Unfortunately you can't truly show his presidency without also showing this."

JOHNSON (May 27, 1964): "I don't see what we can ever hope to get out of there with, once we're committed, I don't think it's worth fighting for and I don't think we can get out. It's just the biggest damned mess I ever saw."
National Security Advisor McGEORGE BUNDY: "It is. It's an awful mess."

If ever a single photo captured LBJ's agony over Vietnam, it was this (left), of him listening to a tape recording from one of the Marines he had sent to fight -- his own son-in-law.
"For years I couldn't look at that without crying," said Robb. "That's my grandfather getting a report from my father when he was over in Vietnam."

By 1968 there were over a half-million American troops in Vietnam, and the war had become so divisive Johnson felt he had no choice but to surrender the power of the presidency: "I shall not seek and will not accept the nomination of my party for another term as your President," he said.

Johnson's legacy is on display today, both in the form of the Vietnam Memorial (which cuts a black gash across the National Mall), and in the person of Barack Obama who, according to now-Congressman John Lewis, was able to become president as a result of that Voting Rights Act.

"I think Lyndon Johnson did more to free, to liberate black America than anyone since Abraham Lincoln," Lewis said.

"How should we balance what you just told me about what he did for black Americans and for all Americans with Vietnam?" Martin asked.

"I think if it hadn't been for Vietnam, he would be considered as one of the great Presidents of all time," Lewis said.