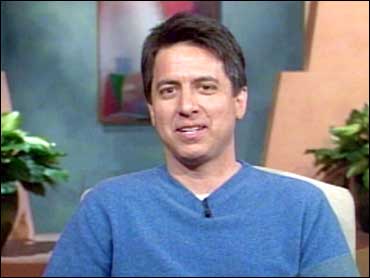 The CBS sitcom "Everybody Loves Raymond" has been one of this generation's most popular television shows. As the program enters its ninth and final season, its creators have put together a special treat for fans.

The DVD "Everybody Loves Raymond: The Complete First Season" is full of bonus features including the pilot and every episode of the first season, Ray Romano tells The Early Show co-anchor Harry Smith. "There is behind-the-scenes how it came about and then the commentary from me and Phil Rosenthal, the creator."

Romano says it is still hard for him to believe the show has such a strong following.

"I still think we're on thin ice," he says with a smile. Reflecting on the show's beginning, he adds, "I had just come from getting fired from a sitcom. I was cast in 'News Radio' and the second day of rehearsal, I got fired. So I wasn't counting on anything. And I was coming from stand-up comedy, and here I am trying to act. I am trying to play basically myself." That's something, he says tongue-in-cheek, that was not easy to do. "I don't know who I am!"

The show did not have a smooth start, he points out. The No. 1 hit back then was "Seinfeld," set in New York on the Upper West Site.

"The ratings weren't good the first year," Romano says. "We were on Friday nights. But I will say there was about the fifth or sixth episode where I let myself think that there is something here. There is a chemistry that might be here and I kind of see it. I didn't get too confident, but I saw that there was a potential."

Romano offers details about how the casting of Patricia Heaton for the role as Ray's wife came to be in a book he co-wrote with Rosenthal: "Everybody Loves Raymond: Our Family Album."

"They tried to make it less ethnic," Romano says, pointing out the fact that he is Italian but looks Jewish was not what Leslie Moonves, the head of CBS, and the executives of the show had in mind. "And they wanted this woman to play my wife who looked very midwestern or whatever and it didn't feel right. They wanted to take it out of New York also. I said, 'Where am I from?' So we gave them Long Island. We were going to have it in Queens, and they wanted out of the city, so we compromised."

Romano gives credit to Rosenthal for "sticking to his guns" and stresses again that, starting out, he was in no position to make any demands.

Now at the end of this final season, he is saying goodbye to the 20 million viewers who watch it every day and there is much anticipation about it.

"It's exciting," Romano says. "It's weird because it hasn't quite sunk in yet. You just get right back in, running. We started working on the last season two months ago. I think as we count it down and get closer, it's going to hit. But it's going to be a lot of emotion. It's going to be excitement. There is going to be a big void left. I mean, it's all been dedicated to this show."

Some Facts About Ray Romano