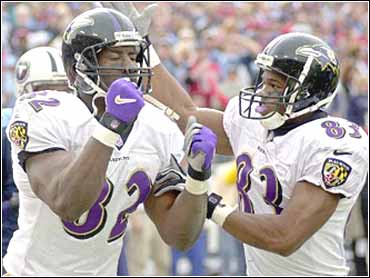 Six first downs? Only 134 yards on offense? Just another Sunday afternoon for the Baltimore Ravens, a team that survived for five weeks this season without scoring a touchdown.

The Ravens advanced to the AFC title game in Oakland next week with a 24-10 win over the Tennessee Titans, a victory forged by two obscure special teamers and Ray Lewis, the NFL's defensive player of the year.

Keith Washington blocked a field-goal attempt and Anthony Mitchell returned it 90 yards for the go-ahead score, then Lewis returned an interception 50 yards for the clinching TD.

"In a game involving two hard physical teams built alike, you knew it was going to come down to something unique," said Baltimore coach Brian Billick. "If that's the way it's going to be, so be it."

It indeed was a hard game between division rivals who dislike each other. The Titans went so far as to put a tape of Billick's pep talk to his team on the scoreboard before the game to rile the Tennessee crowd.

Then there was the battle between Lewis and Tennessee running back Eddie George, his fellow all-Pro, who jawed at each other after almost every play. Lewis won the war when he wrested a pass from George with 6:41 left in the game and took it 50 yards for his first career TD.

Lewis had 12 tackles in addition to his TD return.

George had 91 yards on 27 carries and almost certainly would have become the first player to run for 100 yards against Baltimore in 35 games if Tennessee had not been forced to pass when it got behind.

But the game that sends the Ravens t meet the Raiders in Oakland next week really came down to Baltimore's opportunism and Tennessee's mistakes. That's nothing new for the Ravens, who went the entire month of October without a touchdown but still managed to win two of five games.

Titans kicker Al Del Greco, who missed an extra point and potential game-winning field goal in a 24-23 loss to the Ravens on Nov. 12 that is Tennessee's only other defeat in 18 games at Adelphia Coliseum, had two field goals blocked and hit the left upright from 31 yards.

The second block, just under three minutes into the fourth quarter, broke a 10-10 tie when it floated into the arms of Mitchell, who went 90 yards untouched for the score.

"Losing is tough to swallow, no matter how," said Del Greco, one of the most accurate kickers in NFL history. "To have the type of day I had, missing three in a game and have it come out like this is not like you would ever expect it to happen. I wish I could change it. But the way it comes out is the way it comes out.

"It's been a strange year."

It is for the Titans, who were a yard away from tying the Super Bowl last season. They go home after posting the NFL's best regular-season record at 13-3 to ponder how to score touchdowns.

"If we can make a couple of kicks and we don't have the turnover for a touchdown, it's a different game as far as we're concerned," Tennessee coach Jeff Fisher said. "But those things happen."

He added: "I'm an Al Del Greco fan. I have no reason not to stand behind Al."

The Titans scored on the first possession of the game, driving 68 yards on 11 plays to take a 7-0 lead on a 1-yard plunge by George.

But the only times they got close after that were on two blocked punts by rookie Chris Coleman, and they got only three points from that. Baltimore, which won its ninth straight, tied it at 7-7 in the second quarter when Jamal Lewis scored on a 1-yard run after a 56-yard pass from Trent Dilfer to Shannon Sharpe, who was left wide open by the Tennessee defense.

"They had two blocked punts and got only three points out of it, and once that happened, it seemed like things were on our side," said Baltimore safety Rod Woodson.

Still, the game was tied 10-10 as the fourth quarter opened with the Titans driving.

But they fell a yard short at the Baltimore 19 and Del Greco, one of the NFL's ost accurate kickers in his 17-year career, came in to try from 37 yards.

Instead, the game turned the other way.

Washington leaped and blocked the ball, which went high into the air toward the goal line and right into the arms of Mitchell, a third-string safety. He turned right, headed up the sideline and was barely touched.

A little more than five minutes later, with 6:41 left, Steve McNair aimed for George. Lewis grabbed the ball as it bounced off George's arms and took off down the left sideline to clinch it.

"He's one of the best linebackers ever to play the game," McNair said.

"It was just a great play," he said. "I just drove on the ball. I saw him bobbling it and I grabbed it."

"We're great friends off the field," Lewis added. "But when we're on the field, we're just gladiators going at each other."