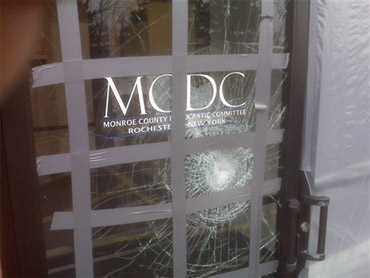 Democratic Congress members are getting lessons from the FBI on how to handle threats such as several directed at their colleagues, including bricks hurled through windows and menacing obscenity-laced phone messages left for those who supported sweeping federal health care legislation.

Windows were shattered at four Democratic offices in New York, Arizona and Kansas and at least 10 members of Congress have reported some sort of threats, leaders said. No arrests had been made as of Wednesday, but the FBI is investigating.

Lawmakers who feel they are at risk will be "getting attention from the proper authorities," House Majority Leader Steny Hoyer said, denouncing the threats and vandalism at a news conference. He declined to say whether any are receiving extra security. Normally only those in leadership positions have personal security guards.

"The bottom line is we need to be very careful in public life that our rhetoric does not turn into incitement," Hoyer told CBS' "The Early Show" Thursday.

Coffin on Lawmaker's Lawn, Other Reports of Angry Actions
Hoyer: Threats Not "Par for the Course"

The brick flung through the window of a county Democratic Party office in Rochester, New York, over the weekend had a note attached: "Extremism in defense of liberty is no vice," roughly quoting 1964 Republican presidential nominee Barry Goldwater.

A New York congresswoman whose office window also was smashed with a brick accused the Republican leadership of failing to denounce attacks against lawmakers. The vandalism happened at Democratic Rep. Louise Slaughter's district office in Niagara Falls early Friday, two days before the House passed the health care overhaul bill.

"It's more disturbing to me that Republican leadership has not condemned these attacks and instead appears to be fanning the flames with coded rhetoric," said Slaughter, a key supporter of the bill.

House Republican leader John Boehner of Ohio said in a statement that while many Americans are angry over the bill's passage, "violence and threats are unacceptable."

"That's not the American way," Boehner said. "We need to take that anger and channel it into positive change."

Some of the anger spilled over in a flood of obscenity and threat-filled phone and fax messages to the office of Democratic Rep. Bart Stupak of Michigan. Stupak vowed to oppose the health care package unless given greater assurance that it would not allow federal funding of elective abortions. He voted in favor after the administration agreed.

Listen to the Threatening Calls

Stupak's office released some of the messages, declining further comment.

"I hope you bleed ... (get) cancer and die," one male caller told the congressman between curses.

A fax with the title "Defecating on Stupak" carried a picture of a gallows with "Bart (SS) Stupak" on it and a noose attached. It was captioned, "All Baby Killers come to unseemly ends Either by the hand of man or by the hand of God."

The vandalism and threats surprised a researcher at a think-tank that monitors extremist groups.

"I think it is astounding that we are seeing this wave of vigilantism," said Mark Potok of the Alabama-based Southern Poverty Law Center.

Hoyer said people have yelled that Democratic lawmakers should be put on firing lines and posters have appeared with the faces of lawmakers in the cross hairs of a target.

While not directly criticizing Republicans, Hoyer said that "any show of appreciation for such actions encourages such action."

Gun imagery was used in a posting on the Facebook page of Sarah Palin urging people to organize against 20 House Democrats who voted for the health care bill and whose districts went for the John McCain-Palin ticket two years ago. Palin's post featured a U.S. map with circles and cross hairs over the 20 districts.

In Virginia, someone cut a propane line leading to a grill at the Charlottesville home of U.S. Rep. Tom Perriello's brother after the address was posted online by activists angry about the health care overhaul. Perriello also said a threatening letter was sent to his brother's house. The FBI and local authorities were investigating.

Tea party activists had posted the brother's address online thinking it was the congressman's home. The post urged opponents to drop by and "express their thanks" for the Democrat's vote in favour of the sweeping health care reform.

Nigel Coleman, chairman of the Danville Tea Party, said he reposted the comment that originated on another conservative blog, including the address, Monday on his Facebook page. The posts were taken down after the mistake was discovered.

"We've never been associated with any violence or any vandalism," he said. "We're definitely sorry that we posted the incorrect address."

Lyndsay Stauble, executive director of the Sedgwick County Democratic Party in Wichita, Kansas, said a brick was hurled through the party's storefront plate glass window late Friday or early Saturday, landing in her office and gouging her wooden desk.

She said that written in marker on the brick were the slogans, "No to Obama" and "No Obamycare."

"The tone is not surprising, but the aggressiveness is," Stauble said Wednesday. "I'm not shocked that people are not reacting well to a large piece of legislation passed by a president that they don't like."