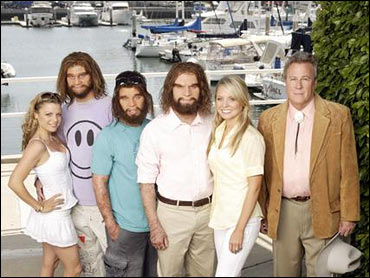 Everyone rejoiced at the announcement that, no, NBC wasn't axing "Law & Order," while "Veronica Mars" fans grieved at news of its demise. Viewers began counting the days until Kelsey ("Frasier") Grammer and Patricia ("Everybody Loves Raymond") Heaton return to us paired in the Fox sitcom "Back to You."

And we all were left shaking our heads over the Geico-commercial-evolved "Cavemen." (Will Geico issue ABC a policy to cover this sitcom in the event of sudden death?)

Last week sure was exciting. But now that life and our collective pulse rate are getting back to normal, what do we really know about the new shows awaiting us come fall?

Not much. Nor is there any reason, come to think of it, for viewers gratefully ushering in the summer months to care about anything fall has in store.

But TV critics care. So let's press on.

For one thing, it's such a temptation to start handicapping the new series, even sight unseen.

Like that "Cavemen" show! Sounds awfully lame, doesn't it? So lame, in fact, it could make you forget a fundamental rule of TV: There are no bad concepts, only bad execution.

Consider the concept for "Lost" (people stuck on an island who get along worse than "Survivor" castaways) or "House" (a doctor who's ruder and even more dismissive than the doctors you deal with in real life). Execution, not the screwball concept, is what made those shows click.

So far, pretty much all we (and by "we" I mean critics as well as the rest of TV Nation) are privy to among the new fall crop are concepts.

Here's the concept for CBS' "Moonlight": a vampire private eye.

Meet NBC's "Chuck": a computer nerd whose brain gets gorged with the government's most sensitive secrets.

Not much to go on, huh? But now the journey has begun. As with every season, the truth will emerge, step by step, for the TV critic striving to judge each series' merits.

Here is that path to enlightenment: