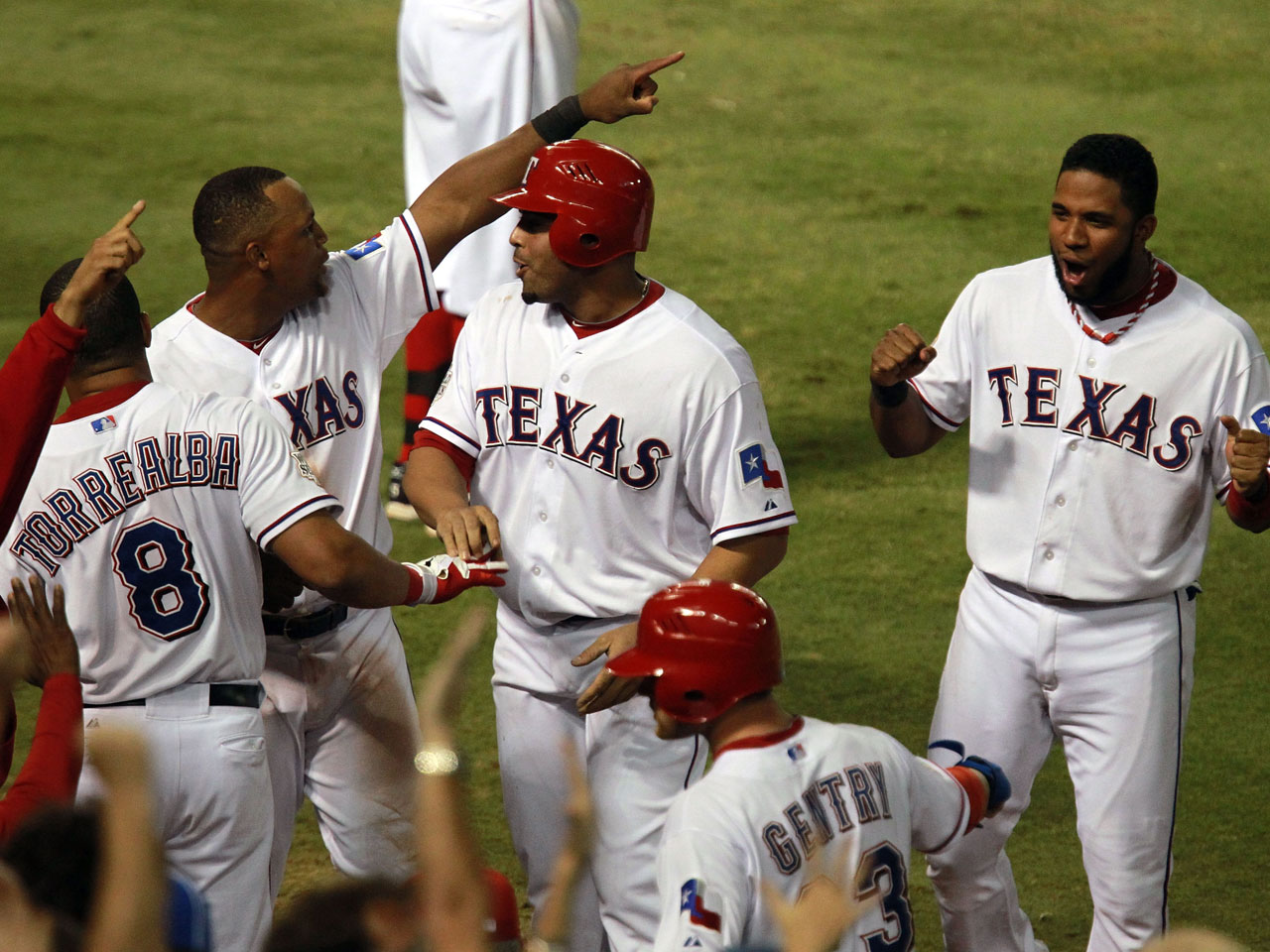 ARLINGTON, Texas - Texas' Mike Napoli hit a tiebreaking two-run double in the eighth inning as the Rangers came from two runs down to beat the St. Louis Cardinals 4-2 on Monday and take a 3-2 lead in the World Series.

Solo home runs by Mitch Moreland in the third and Adrian Beltre in the sixth brought Texas level. Michael Young doubled leading off the eighth and Napoli hit a drive to right center of Marc Rzepczynski to bring in two runs.

"Just trying to get something to the outfield, get a sac fly, get that run across the board," Napoli said. "I was trying to stay short and I got a pitch I could handle over the middle of the plate and put it in the gap."

Texas closer Neftali Feliz closed it out in the ninth, including striking out Albert Pujols as part of a double play when Allen Craig was caught by Napoli's throw trying to steal second.

The win moved Texas within one win of its first World Series title. The series moves back to St. Louis for Game 6 on Wednesday, when Colby Lewis will be the Rangers starting pitcher, against Jaime Garcia for the Cardinals. The forecast is cold and wet.

If the Cardinals lose, there's no doubt which play will trouble veteran manager Tony La Russa for a long time.

It was 2-2 when Texas put runners on first and second with one out in the eighth, and Rzepczynski was summoned from the bullpen. Texas batter David Murphy followed with a bouncer back to the mound, a possible inning-ending double play in the making.

Rzepczynski snatched at it but couldn't glove it, succeeding only in redirecting it away from his second baseman, and the play resulted in no outs and loaded bases.

La Russa elected to let Rzepczynski stay in to face Napoli, and it didn't work.

La Russa appeared stunned by the turnaround. Later in the eighth, he brought in reliever Lance Lynn and had him issue an intentional walk to the only batter he faced. Jason Motte eventually ended the inning, but it was too late.

Fittingly, Napoli had a role in the final play. Lance Berkman struck out and the ball hit Napoli's shin guard and trickled up the first base line, where the catcher picked it up and tossed to first base to end the game.

The Cardinals had been well placed for victory when they scored twice in the second, cashing in two leadoff walks sandwiched around a wild pitch.

Yadier Molina notched his fifth RBI of the Series with a single that left fielder Murphy overran and fumbled for an error. Skip Schumaker followed with an RBI grounder to first that Moreland boxed around, preventing any chance at a double play.

Already ahead 2-0, the Cards threatened in the third after pitcher C.J. Wilson slipped coming off the mound trying to field Rafael Furcal's leadoff bunt and made a poor, backhanded flip that skittered past Moreland at first, allowing Furcal to run on to second.

But with runners at the corners, Wilson got Matt Holliday to bounce into a quick double play.

Moreland atoned for his fielding woes with a home run in the third, hitting a drive halfway up the second deck in right field to make it 2-1.

Adrian Beltre's homer made it 2-2 with two outs in the sixth. He dropped to one knee after following through on a meaty cut. He connected on a big curve from St. Louis starter Chris Carpenter.

St. Louis had a chance to go back ahead in the seventh. Pujols got a good jump on a pitch that Matt Holliday hit for a single to left-center. Pujols chugged around the bags and the third base coach initially waved him to continue on to home, only to put up a late stop sign.

Whether Pujols would have been safe on shortstop Elvis Andrus' wide throw to the plate became moot when Lance Berkman was intentionally walked to load the bases and David Freese flied out to end the inning.