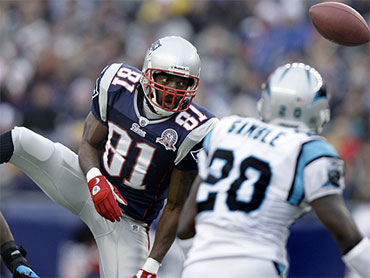 Patriots coach Bill Belichick defended Randy Moss against comments that the wide receiver doesn't go all out on the field.

Belichick said Monday he has a lot of respect for Moss and dismissed the criticism as coming from two players who had just lost another game.

Panthers cornerback Chris Gamble told The Boston Globe that they knew Moss would "shut it down."

"He'd just give up a lot; slow down; he's not going deep; not trying to run a route. You can tell (by) his body language," the paper quoted him as saying. "I know everyone who plays against him, they can sense that. Once you get into him in the beginning of the game, he shuts it down a little bit."

Carolina cornerback Richard Marshall said he saw the effort from Moss, but the Panthers were able to take him out of the game.

"Moss was running and trying to get open, but we had great coverage on him," Marshall said.

Moss was held to one catch for 16 yards and lost a fumble on that play. He also appeared not to break hard for a pass that was intercepted by Gamble. But Belichick said Moss is one of the Patriots best and most consistent players.

The star receiver was largely neutralized in the New England Patriots' 20-10 victory over the Panthers on Sunday, when he spent more time tackling defenders after turnovers than avoiding them.

He did not speak to reporters after the game, but did speak to Quarterback Tom Brady during it.

"He was frustrated in himself and the situation, and it's something you've got to fight through," Brady said. "He keeps fighting through it. You have those days where it's not all great, but you keep lining up and you've got to keep fighting."

A speedy and talented receiver who's found trouble at every NFL stop, Moss caught 98 passes and an NFL-record 23 touchdowns two years ago in his first year with the Patriots. But since then, he has struggled to overcome the perception that he does not try on every play, especially when things are not going his way.

Moss is in danger of becoming an afterthought in the Patriots offense while Wes Welker becomes Brady's go-to guy. Welker caught 10 passes for 105 yards on Sunday, taking over the NFL lead with 105 catches on the season and surpassing Moss for the team lead with 1,158 yards receiving.

Brady said Moss' problem wasn't a lack of effort but an inability to put his mistakes behind him.

Moss was one of four players sent home Wednesday when they showed up late for a team meeting. Coach Bill Belichick wouldn't comment directly on Moss when asked if he was concerned about keeping the star receiver engaged.

"We're in the middle of December, we have three games left and they're all important," Belichick said. "We need everybody."